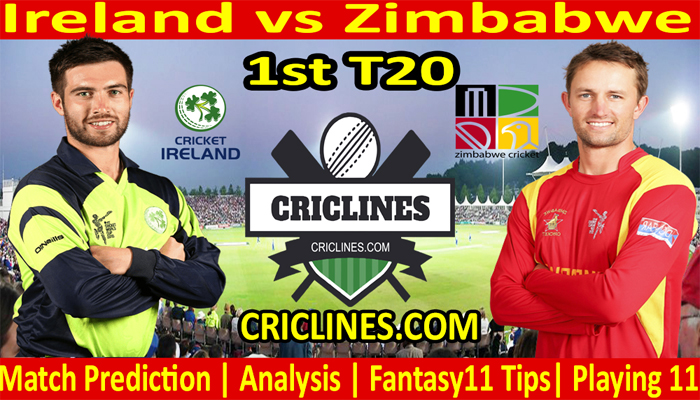 The cricket fans are ready to witness yet another big battle of T20 cricket. The 1st T20 match of Zimbabwe tour of Ireland, 2021 is scheduled to be held on Friday, 27th August 2021 at Clontarf Cricket Club Ground, Dublin. We are posting 100 safe, perfect, and accurate today match predictions for all matches of Ireland and Zimbabwe.

Ireland is ranked at the 12th position in ICC T20 ranking and had lost a T20 series against South Africa at their home venues. Andrew Balbirnie is going to lead the team during this home series against Zimbabwe. Shane Getkate, William McClintock, and Harry Tector are the key batters for this team.

Kevin O Brien, Simi Singh, Paul Stirling, and Curtis Campher are part of the Ireland team as all-rounders while Neil Rock and Lorcan Tucker are the wicket keepers for this team. The bowling department of Ireland is not strong at least on papers. Mark Adair, George Dockrell, Joshua Little, Barry McCarthy, and Craig Young will be handling the bowling unit of Ireland.

Zimbabwe had played a lot of cricket during this year, 2021 but had not won any series. They had lost their recent series against Pakistan and then against Bangladesh. Craig Ervine will be leading the Zimbabwe team during this tour of Ireland. This team has a combination of young and experienced batsmen. Tinashe Kamunhukamwe, Tarisai Musakanda, Dion Myers, Milton Shumba will be leading the batting order.

Some good all-rounders like Ryan Burl, Sean Williams, Sikandar Raza, and Wesley Madhevere are the all-rounders who are part of the squad of Zimbabwe while Regis Chakabva and Brendan Taylor are the wicket keepers. Blessing Muzarabani, Wellington Masakadza, Donald Tiripano, Tendai Chatara, and Richard Ngarava are the key bowlers of Zimbabwe.

Ireland had played a total of 101 T20 matches where they won 42 matches and opposing teams won 51 matches. Their 7 matches were ended with no result and 1 match was tied.

Zimbabwe had played a total of 88 T20 matches so far. They won 22 while other teams won 66 matches.

Ireland had played three matches against Zimbabwe where they had won two matches while Zimbabwe had won just one match.

The 1st T20 match between Ireland and Zimbabwe is going to be played at Clontarf Cricket Club Ground, Dublin. This is one of the biggest venues in Ireland in terms of crowd capacity. The pitch on this venue is good for batting. It also has a bit of help for the spin bowlers. As per the live cricket score, a total of 190 runs should be a par score.

William Porterfield and Andrew Balbirnie had performed well with the bat in the most recently played matches and they are looking in superb form.

Who Will Win Ireland vs Zimbabwe 1st T20

Who Will Win Ireland vs Zimbabwe 1st T20 Toss-IRE

Who Will Win Ireland vs Zimbabwe 1st T20 Match-ZIM