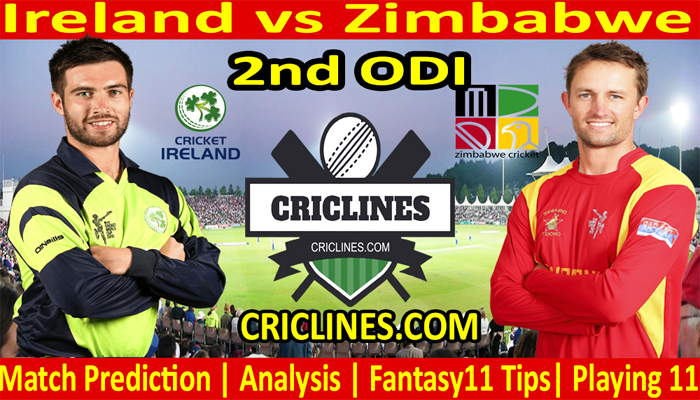 The cricket fans are ready to witness yet another big battle of ODI cricket. The 2nd ODI match of Zimbabwe tour of Ireland, 2021 is scheduled to be held on Friday, 10th September 2021 at Civil Service Cricket Club, Belfast. We are posting 100 safe, perfect, and accurate today match predictions for all matches of Ireland and Zimbabwe.

Zimbabwe had won the 1st match of three ODI matches series but the question is that will they continue their good form in upcoming matches or they will repeat what they did in the T20 series? Ireland had lost the 1st ODI match and we are sure that they will bounce back strongly in the next matches.

Ireland lost the 1st ODI match by a handsome margin of 38 runs where they won the toss and decided to field first. The performance of their bowling unit was not impressive as they leaked plenty of runs. They were charged for 266 runs in their inning of 50 overs. Craig Young, Mark Adair, Joshua Little, Simi Singh, Andy McBrine, and Dockrell picked one wicket each.

The batting order of Ireland also failed to give the best performance. They scored 228 runs and were all-out in 48.4 overs while chasing the target of 267 runs even after having a good start. William Porterfield was the highest run-scorer from their side who scored 75 runs with the help of nine boundaries. Harry Tector also had a superb performance with the bat. He scored 50 on 55 deliveries with the help of one boundary and two huge sixes.

The way how the batting order of Zimbabwe performed in the 1st match was just outstanding. They scored a total of 266 runs in their 50 overs inning. The skipper, Craig Ervine was the highest run-scorer from their side who scored 64 runs with the help of seven boundaries. Sikandar Raza was the other batsman who put some runs on the board. He remained not out after scoring 59 runs on 44 deliveries with the help of five boundaries and two huge sixes. Brendan Taylor had 49 runs to his name.

The bowling department of Zimbabwe also performed well in the 1st match and defended the target of 267 runs. They leaked 228 runs and send the all team of Ireland back to the pavilion in 48.4 overs. Blessing Muzarabani was the highest wicket-taker from their side who picked four wickets in his 9.4 overs bowled out against 29 runs. Wellington Masakadza and Sean Williams picked two wickets each while Luke Jongwe and Wesley Madhevere picked one wicket each. Sikandar Raza failed to pick any wicket.

Ireland had played a total of 171 ODI matches where they won 71 matches and opposing teams won 88 matches. Their 9 matches were ended with no result and 3 matches were tied.

Zimbabwe had played a total of 537 ODI matches so far. They won 141 while other teams won 378 matches. Their 7 matches were tied and 11 matches were ended with no result.

Ireland had played 14 matches against Zimbabwe where they had won 6 matches while Zimbabwe had won 7 matches while one match between these two teams was ended with no result.

The 2nd ODI match between Ireland and Zimbabwe is going to be played at Civil Service Cricket Club, Belfast. This is one of the biggest venues in Ireland in terms of crowd capacity. The pitch on this venue is good for batting. It also has a bit of help for the spin bowlers. As per the live cricket score, a total of 270 runs should be a par score.

Sikandar Raza is an experienced player of ODI cricket and had also had performed well in the previous match. We think that he will be a key player to watch in this match.

Who Will Win Ireland vs Zimbabwe 2nd ODI

Who Will Win Ireland vs Zimbabwe 2nd ODI Toss-ZIM

Who Will Win Ireland vs Zimbabwe 2nd ODI Match-IRE