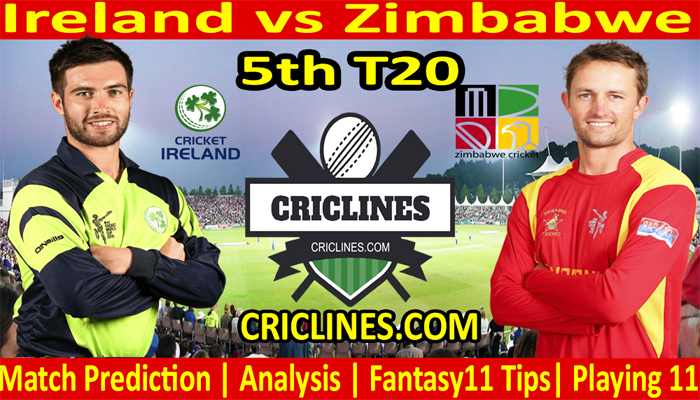 The cricket fans are ready to witness yet another big battle of T20 cricket. The 5th T20 match of Zimbabwe tour of Ireland, 2021 is scheduled to be held on Saturday, 4th September 2021 at Bready Cricket Club, Bready, Northern Ireland. We are posting 100 safe, perfect, and accurate today match predictions of matches of Ireland and Zimbabwe.

Ireland had won the previous match with a handsome margin of 64 runs and also this series of five matches. This win will give Ireland a heavy boost in their confidence for the upcoming World Cup. Zimbabwe must be disappointed with their performance in this tour of Ireland.

We had seen some outstanding batting performances by the batting order of Ireland in recently played two matches. They scored a total of 174 runs in their inning of 20 overs in the 4th T20 match. Almost all batsmen from their side put some runs on the board. Kevin O Brien was the highest run-scorer from their side with 47 runs to his name. He faced 39 deliveries and smashed six boundaries and one huge six. Paul Stirling once again performed well in the previous match and scored 39 runs while the skipper, Andrew Balbirnie could manage to score 36 runs.

The bowling department of Ireland also had performed well in both previous matches. They defended the target of 175 runs and leaked 110 runs in their inning of 20 overs. Mark Adair was the highest wicket-taker from their side who picked four wickets in his four overs bowled out against just 23 runs. Shane Getkate picked two wickets while Craig Young, Barry McCarthy, and Simi Singh picked one wicket each.

Zimbabwe had totally failed to give their best performance in this tour of Ireland. They had lost three out of four matches played so far and also the series of five matches. They had failed in batting, bowling, and also in fielding. They were charged for 174 runs in their inning of 20 overs. W Masakadza was the highest wicket-taker from their side with two wickets to his name. Ngarava and L Jongwe picked one wicket each while Muzarabani, Tiripano, and Madhevere were the bowlers who failed to pick any wicket.

The batting order of Zimbabwe once again failed to give the best performance in the previous match and they could not chase the target of 175 runs. They scored 110 runs on the board in their inning of 20 overs. The skipper, Craig Ervine was the highest run-scorer from their side with 28 runs to his name. Luke Jongwe remained not out after scoring 24 runs while Regis Chakabva and Richard Ngarava remained not out after scoring 11 runs.

Ireland had played a total of 105 T20 matches where they won 45 matches and opposing teams won 52 matches. Their 7 matches were ended with no result and 1 match was tied.

Zimbabwe had played a total of 92 T20 matches so far. They won 23 while other teams won 69 matches.

Ireland had played seven matches against Zimbabwe where they had won five matches while Zimbabwe had won two matches.

The 5th T20 match between Ireland and Zimbabwe is going to be played at Bready Cricket Club, Bready, Northern Ireland. This is one of the biggest venues in Ireland in terms of crowd capacity. The pitch on this venue is good for batting. It also has a bit of help for the spin bowlers. As per the live cricket score, a total of 190 runs should be a par score.

Who Will Win Ireland vs Zimbabwe 5th T20

Who Will Win Ireland vs Zimbabwe 5th T20 Toss-ZIM

Who Will Win Ireland vs Zimbabwe 5th T20 Match-IRE

We had provided you the above-mentioned today cricket prediction on the basis of our research, understanding, and analysis. You can consider the point we had provided you and in the end, the final decision will be yours.