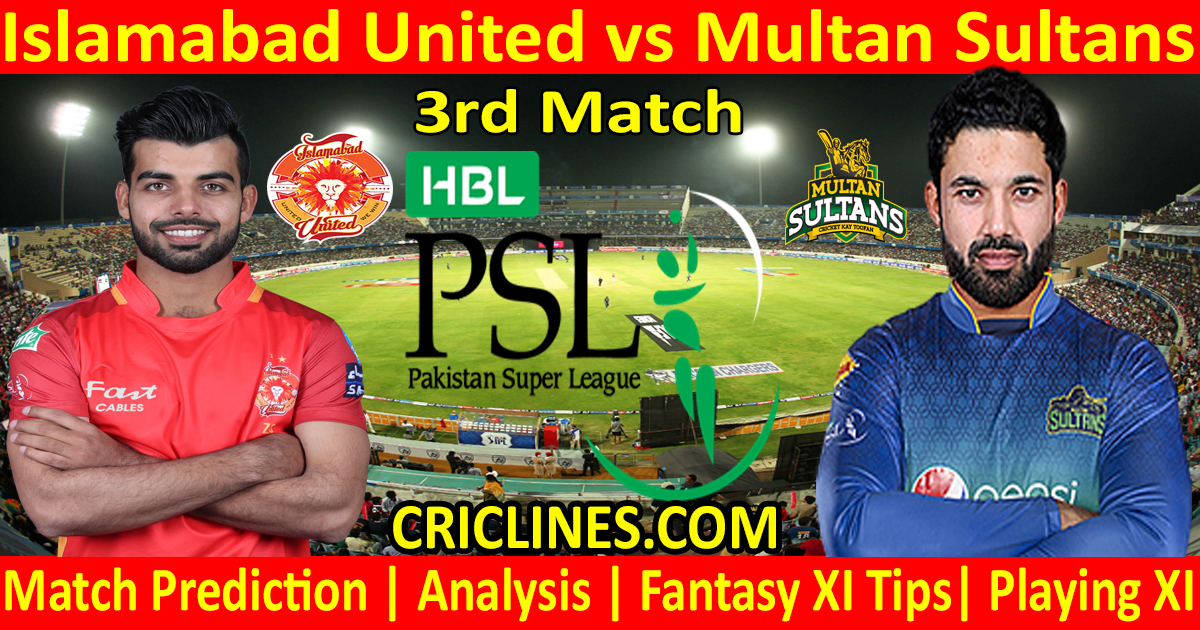 The cricket fans are ready to witness yet another big battle of PSL T20. The 3rd Match of Pakistan Super League 2021 is scheduled to play between Islamabad United and Multan Sultans on Sunday, 21st February 2021 at National Stadium, Karachi. We are posting safe, accurate, and secure today match prediction for all matches of PSL free.

Islamabad United had won the title of Pakistan Super League two times. First in the opening season of PSL T20 back in 2016 and other in 2018 but they were the worst-performing team of the previous edition. The squad of Islamabad United is average for this season. We can’t say a strong squad as compared to the other teams of this tournament. Three key players of this team like Chris Jordan, Reece, and Colin Munro are not available and Ali Khan, Paul Stirling, and Fawad Ahmed will be replacing these players. The batting order of this team is also average. They have some hard-hitters at the top order like Phil Salt and Alex Hales but these players are not tested in the pitches as are in Karachi and Lahore. Alex Hales had to prove himself for the T20 world cup which is coming soon.

Iftikhar Ahmed, Asif Ali, and Hussain Talat had to play a major role in the middle overs. None of these players had performed extraordinarily in the previous season of PSL. Faheem Ashraf and Shadab Khan have the ability to bat in the last overs. Shadab Khan is known as a hard-hitter when he bats in the last overs. Like the batting, the bowling unit of Islamabad United is also average. Hassan Ali is going to lead the bowling unit of the United. Hassan Ali had performed well in the recent series against South Africa in both formats, in tests, and also in the last t20 match. Ali Khan, Zafar Gohar, and Fawad Ahmed will be leading the bowling department of Islamabad United along with Hassan Ali. We had written above that Islamabad United is overall an average team and we are not expecting much from this team.

Multan Sultans was the unlucky team of the previous season of the PSL T20 as they ended at the top of the table but failed to win the title. Sultans had appointed Muhammad Rizwan as their new captain. Rizwan is in tremendous form these days. He had recently scored a hundred against South Africa and fifty in the almost next two matches. Rizwan has the support of strong and well-known batsmen of t20 cricket. Rilee Rossouw, James Vince, Chris Lynn, Sohaib Maqsood, and Khushdil Shah make the batting order of Multan Sultans very strong. The previous captain of this team, Shan Masood is out of form and we don’t think that he will be the part of playing eleven for this match.

Carlos Brathwaite and Shahid Afridi add extra power in the batting order of the Sultans and the batting order of this team is much stronger than the United. The bowling unit of Multan Sultans is also strong like the batting. They have a deadly spin combination in the shape of Imran Tahir and Usman Qadir. Usman Qadir had recently performed well against South Africa and had picked some key and early wickets. As we look into the conditions, we don’t think that Imran Tahir will get the place in the final eleven. Sohail Khan, Sohail Tanveer, and Imran Kha Sr are the other bowling options for the Sultans. Multan Sultans have many options in bowling if we count the all-rounders. Multan Sultans have the best chance to have a kick start to this tournament.

The 3rd match of Pakistan Super League season 2021 is scheduled to be held at National Stadium, Karachi. The pitch here at this venue is flat good for batting as there is no bounce and pace. Outfield on this venue is very fast and the ball will travel to the boundary very quickly. It also has a lot of help for the spin bowlers but almost all teams in this tournament have a strong batting order so this does not matter. According to the cricket prediction, a total of 180 runs should be a par score.

While we had a deep look at the squad, we think that Islamabad United is going to struggle in this season of the PSL T20 but they have a couple of players who can change the game. In this match, the batting and bowling department of the Sultans is much stronger as compared to the United. We also have reports from different sources for the win of the Sultans.