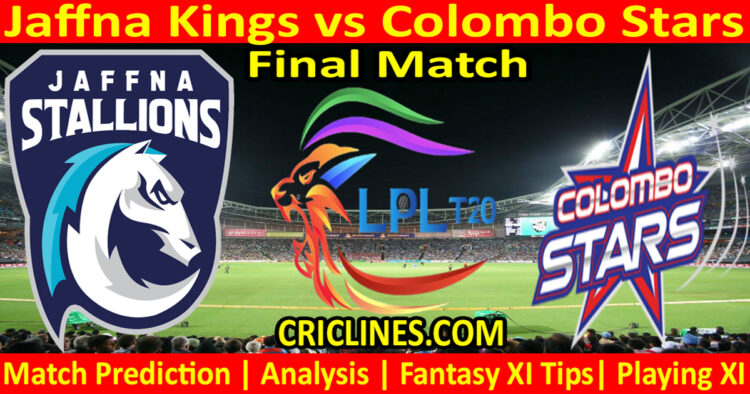 The cricket fans are ready to witness yet another big battle of the Lanka Premier League. The Final match of LPL T20 is scheduled to play between Jaffna Kings and Colombo Stars on Friday, 23rd December 2022 at R.Premadasa Stadium, Colombo. We are posting safe, accurate, and 100% secure today match prediction of LPL T20.

Jaffna Kings had been the second-best-performing team in league matches. They played eight matches with six wins to their name. They lost just two matches and are holding the second position on the ladder. They beat the best performers of this tournament, Kandy Falcons in the qualifier match and reached the final.

The performance of the Colombo Stars was not very good in league matches. They could manage to win just three out of eight matches. They lost eight matches and are situated in the third position on the points table. They beat Galle Gladiators in the eliminator match and won the qualifier 2 match against Kandy Falcons.

Thisara Perera is the leader of the Jaffna Kings and he will be confident for this big match. Jaffna Kings has a decent record against the Colombo Stars as they had won the previous five matches in a row against the Kings. The batting order of the Kings had been just outstanding throughout this tournament. Rahmanullah Gurbaz and Avishka Fernando are the opening batsmen of this side and had provided a good opening start in almost each and every match. The middle batting order of Jaffna Kings is also strong and is led by Dunith Wellalage, Afif Hossain, and Sadeera Samarawickrama. These all batsmen had been good in the previous matches.

Shoaib Malik and Thisara Perera had also been good in the middle overs. We are sure that the Kings will put a handsome total on the board if they bat first. The bowling unit of Jaffna Kings also had good in this tournament. Binura Fernando and Perera had proved the most successful and leading wicket-taker. We don’t think that Jaffna Kings will change its final playing eleven and they will play with the same team as the qualifier 1 match. There is a lot of responsibility on the shoulders of Maheesh Theekshana and Zaman Khan. They have to bowl in the right areas to restrict the batting order of the Colombo Stars on a low total. Vijaykanth Viyaskanth and Shoaib Malik can also bowl well in the middle overs. Binura Fernando and Mahesh Theekshana were just good in the previous match and we are expecting for the same kind of performance in this match.

Colombo Stars were not good in the league matches but now they are in the final which many of us were not expecting. The captain of the Stars, Angelo Matthews had been just outstanding in the playoff matches and it was his best performance and good leadership that the Stars won two important matches in a row. They performed well against Galle Gladiators in the eliminator match and were just superb in the qualifier 2 match against the best-performing team of this tournament, Kandy Falcons. The batting order of Colombo Stars is dependent to Nishan Madushka and Dinesh Chandimal. Ravi Bopara and Charith Asalanka are the other two batsmen who has to give the best performance in this match.

Dominic Drakes and Matthews are power hitters in the squad of the Stars and if they perform well in this match, the Colombo Stars will won the title of the Lanka Premier League. Kasun Rajitha had been the best bowler from their side in the previous matches and he has to give the best performance in this match. He is an expert to handle the new ball and we are hoping that he will pick some early wickets. Suranga Lakmal also had been good in the previous matches with the new ball. He can also create some problems for the batting order of the Jaffna Kings. Dominic Drakes and Mohammad Nabi are good bowlers of the middle overs. Benny Howell and Seekkuge Prasanna are other bowlers of the Colombo Stars who had been just good in the previous matches. Both teams had been good in a most recent match and we are hoping for a very close match.

The Final Match of the Lanka Premier League is going to be held at the R.Premadasa Stadium, Colombo. We had observed in the previous matches played here that the pitch here at this venue is good for batting. The track is slower than the others we have seen and helps the spinners quite a bit. We are hoping that the surface is bound to get slower and be a bit more difficult for batting in this match. A score of 185 is going to be tough to chase.

Dream11 fantasy team lineup prediction for Jaffna Kings vs Colombo Stars Final Match LPL 2022. After checking the latest player’s availability, which players will be part of both teams, and the possible tactics that the two teams might use as we had learned from previous seasons of Lanka Premier League to make the best possible Dream11 team.