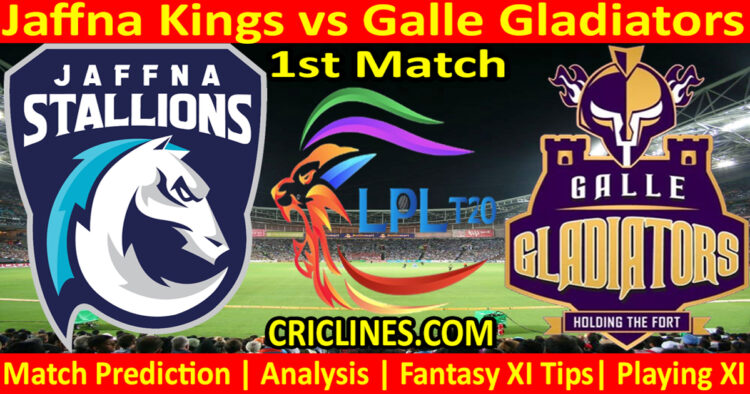 The world is ready to witness yet another big battle of the Lanka Premier League. The 1st match of LPL T20 is scheduled to play between Jaffna Kings and Galle Gladiators on Tuesday, 7th December 2022 at Mahinda Rajapaksa International Stadium, Hambantota. We are posting safe, accurate, and 100% secure today match prediction of LPL T20.

The finalist of the Lanka Premier League T20 2021 is going to face each other in the first match of LPL 2022. Jaffna Kings are the defending champions and will be facing the runner-up team of the previous season Galle Gladiators. Jaffna Kings were the best-performing team of the previous season when the league matches were completed. They won six out of eight matches played. They lost just two matches and were leading the ladder.

Galle Gladiators also performed well in the first edition of LPL T20 and were the second-best performing team when the league matches were completed. They also played eight league matches with four wins to their name. They lost three matches while their one match came with no result. They were holding the second position on the table. They won the qualifier 1 match against Jaffna Kings but were beaten by the same team in the final match.

Thisara Perera was leading Jaffna Kings in the previous edition of LPL and he will also be leading the Kings in this tournament. Jaffna Kings had not made many changes in their squad and had picked almost the same players who were part of the squad of this team in the previous season. The batting order of this team is strong at least on paper. Ashan Randika, Nipun Dananjaya, and Avishka Fernando are the leading batsmen in the squad of this team while Rahmanullah Gurbaz, Sadeera Samarawickrama, and Tom Kohler-Cadmore are wicket-keeper batters in this team.

Jaffna Kings also have some best batting all-rounders of white ball cricket in their squad. Shoaib Malik, Dhananjaya de Silva, Suminda Lakshan, James Neesham, and Theivendiram Dinoshan are leading batting all-rounders who are part of the batting squad of the Kings. Jaffna Kings are very rich in the bowling department. Maheesh Theekshana, Praveen Jayawickrama, Dunith Wellalage, Binura Fernando, Dilshan Madushanka, Waqar Salamkheil, James Fuller, Asitha Fernando, and Theesan Vithushan are part of the bowling squad of the Kings. We think that the Kings will give a tough time to all other teams in this tournament and will also defend their title.

Galle Gladiators had changed their captain for this edition of the Lanka Premier League. Bhanuka Rajapaksa was leading the Gladiators in the previous season and now they had appointed Kusal Mendis as their new leader. Galle Gladiators had made a lot of changes in their squad and had picked the best players of the T20 format of cricket. They had added their batting order and added Iftikhar Ahmad, Azam Khan, and Kusal Perera in their squad. These changes made the batting order of this team much stronger than they were in the previous season. Nuwanidu Fernando and Asad Shafiq are also part of the batting squad of this side.

Galle Gladiators had dropped their main bowlers which were part of the team in the previous season and had picked some new names in the bowling department. Imad Wasim had played recently in the T10 league and had performed well for his team. The conditions in Sri Lanka are not much different from Abu Dhabi and we are hoping that he will also play well in this tournament. Anwar Ali and Mohammad Hasnain are also available in the bowling unit of this team. Mohammad Hasnain was part of the national team of Pakistan in the T20 World Cup but he did not perform well in Australia. The playing conditions in Sri Lanka are much different from Australia and we are sure that he will perform well. You can pick him as the highest wicket-taker. Pulina Tharanga, Nuwan Thushara, Lakshan Sandakan, Nipun Malinga, Sachindu Colombage, and Nuwan Pradeep are other bowlers of Galle Gladiators.

The 1st Match of the Lanka Premier League is going to be held at the Mahinda Rajapaksa International Stadium, Hambantota. We had observed in the previous matches played here that the pitch here at this venue is good for batting. The track is slower than the others we have seen and helps the spinners quite a bit. We are hoping that the surface is bound to get slower and be a bit more difficult for batting in this match. A score of 185 is going to be tough to chase.

Dream11 fantasy team lineup prediction for Jaffna Kings vs Galle Gladiators 1st Match LPL 2022. After checking the latest player’s availability, which players will be part of both teams, and the possible tactics that the two teams might use as we had learned from previous seasons of Lanka Premier League to make the best possible Dream11 team.