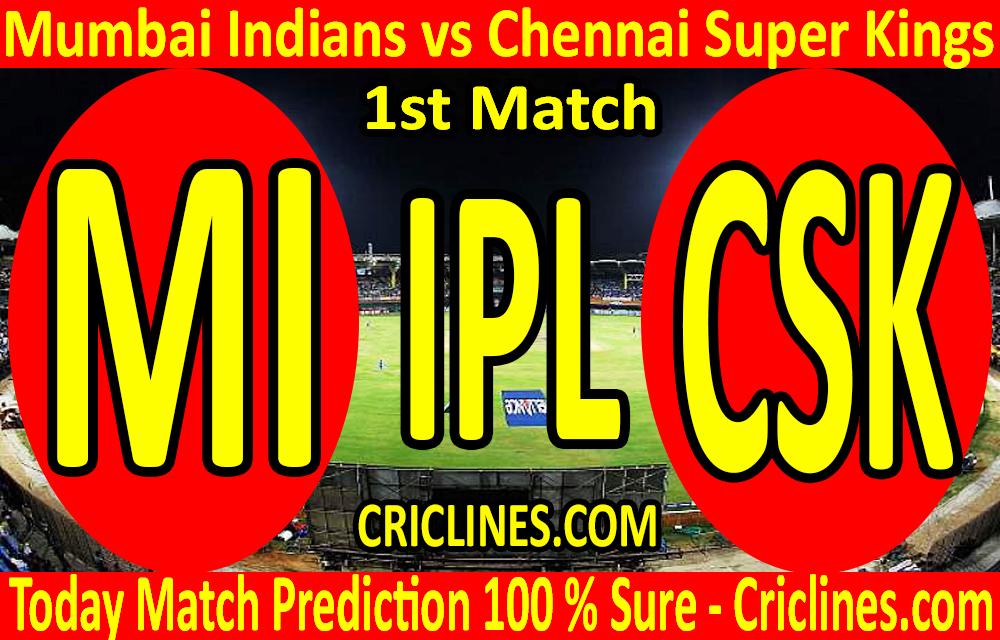 The cricket fans are ready to witness yet another big battle of the Indian Premier League. The 1st Match match of Dream11 IPL T20 2020 is scheduled to play between Mumbai Indians and Chennai Super Kings on Saturday, 19th September 2020 at Sheikh Zayed Stadium, Abu Dhabi. We are posting safe, accurate, and secure today match prediction for all matches of IPL T20 free.

Mumbai Indians is the most successful team of all seasons of the Indian Premier League. This team had won the title of IPL T20 for the four times including the title of the previous season was the beat Chennai Super Kings by the margin of just one run. The performance of Mumbai Indians was outstanding in the previous season of the IPL. They played a total of 14 matches at the league stage with nine wins to their name. They lost five matches and were leading the points table of IPL 2019 with 18 points and an impressive run rate among all other teams. They beat Chennai Super Kings in the Qualifier 1 match with a handsome margin of six wickets and made their way directly to the final where they beat once again Chennai Super Kings by the margin of just one run. Remember, it was Lasith Malinga who defended nine runs in the last over of the final match.

Some key changes had been made by the team management of the Mumbai Indians. Rohit Sharma is going to lead this team in this season of the IPL T20. The batting order of this team is not much stronger as it was expected. Rohit Sharma will be leading the batting order with Quinton de Kock, Chris Lynn, Saurabh Tiwary, Anmolpreet Singh, and Suryakumar Yadav are the key batters for Mumbai Indians. Some best and well-known all-rounders of the t20 format of cricket are the part of the squad of this team. Krunal Pandya, Kieron Pollard, Hardik Pandya, Sherfane Rutherford, Anukul Roy, and Prince Balwant Rai are the all-rounder who is the part of the squad of Mumbai Indians. The bowling unit of Mumbai Indians is strong at least on perpers. Jasprit Bumrah, Digvijay Deshmukh, Nathan Coulter-Nile, James Pattinson, Rahul Chahar, Mohsin Khan, Trent Boult, Mitchell McClenaghan, and Dhawal Kulkarni will be leading the bowling unit of the Mumbai Indians.

Chennai Super Kings had won the title of the Indian Premier League three times. This is the only team of this tournament who had qualified for the final of this tournament for the eight times. They were beaten by Mumbai Indians in the final of the previous season of IPL T20 by the margin of just one run. This was the second-best performing team of the previous season of the IPL at the league stage. They won nine out of 14 matches played at the league stage. They lost five matches and were holding the 2nd position on the points table after the end of league stage matches. They were beaten by Mumbai Indian in the qualifier 1 match by the margin of six wickets. They beat Delhi Capitals in the qualifier 2 match and reached the final but they were beaten by Mumbai Indians in the final. They failed to chase nine runs in the last over.

Chennai Super Kings had not made too many changes in their squad for this edition of the IPL T20. MS Dhoni is a regular captain of Chennai Super Kings and also will be leading in this tournament even he had been retired from International Cricket. Suresh Raina was also the part of the squad of this team but he had left the tournament due to some family issues and we think that this is a huge loss for CSK. The batting order of this team is also strong even Suresh Raina is not the part of this team. Murali Vijay, Ambati Rayudu, Faf du Plessis, and Ruturaj Gaikwad are the leading batsmen of this team. Chennai Super Kings is a very rich team when it comes to the all-rounding squad. Shane Watson, Dwayne Bravo, Kedar Jadhav, Ravindra Jadeja, Piyush Chawla, Mitchell Santner, and Monu Kumar are the leading all-rounder of the CSK. The bowling unit of Chennai Super Kings is also strong at least on papers. Shardul Thakur, Deepak Chahar, KM Asif, Imran Tahir, Karan Sharma, Lungi Ngidi, Sam Curran, Josh Hazlewood, and Ravisrinivasan Sai Kishore are the key bowlers for Chennai Super Kings.

The 1st Match match of the Indian Premier League is going to be Sheikh Zayed Stadium, Abu Dhabi. We had observed in the previous matches played here that the pitch here at this venue is good for batting. The track is slower than the others we have seen and helps the spinners quite a bit. We are hoping that the surface is bound to get slower and be a bit more difficult for batting in this match. A score of 185 is going to be tough to chase.

The weather forecast for Abu Dhabi is good for this cricket match. There are some chances of rain in the region and it is possible that we may watch a disturbed match.

Dream11 fantasy team lineup prediction for Mumbai Indians vs Chennai Super Kings 1st Match match IPL 2020. After checking the latest players’ availability, which players will be part of both teams, he possible tactics that the two teams might use as we had leaned from previous seasons of Indian Premier League to make the best possible Dream11 team.