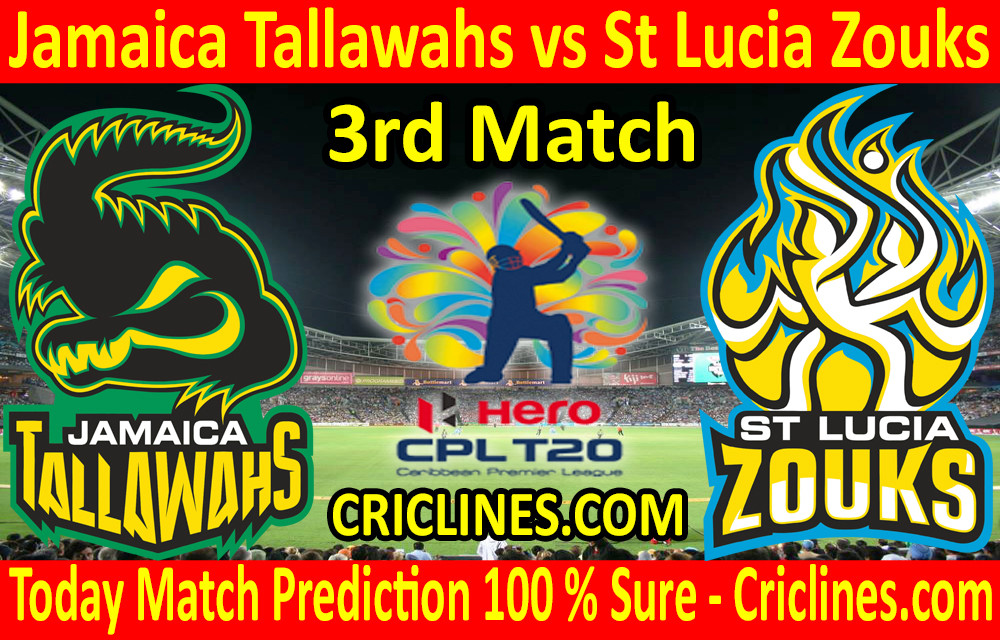 The world is ready to witness yet another big battle of the Caribbean Premier League. The 3rd Match match of CPL 2020 is scheduled to play between Jamaica Tallawahs and St Lucia Zouks on Wednesday, 19th August 2020 at Brian Lara Stadium, Tarouba, Trinidad. We are posting safe, accurate, and secure today match prediction for all matches of CPL free.

Jamaica Tallawahs is the third most successful team of the Caribbean Premier League. This team had won the title of CPL T20 for two times. They won the very first title of this tournament in 2013 and the second title in 2016. This team had played a total of 75 matches in the history of CPL T20 where they won 40 matches and lost 34 matches while their one match was ended with no result. The winning ratio of Tallawahs is 54.05% but they were the worst-performing team of the previous season of the Caribbean Premier League. They played ten matches at the league stage with just two wins to their name. They lost eight matches and were laying at the bottom of the points table after the end of league stage matches. The reason for these bad results was the poor performances by their bowling unit. They had the big names of the T20 format of cricket like Chris Gayle and Andre Russell but failed to get over the line. Andre Russell was the player who unfortunately got unfit and missed five key matches.

Some key changes had been made in the final squad of Jamaica Tallawahs for this season of CPL. Rovman Powell will be leading the Tallawahs in this season. This team had got the services of Sandeep Lamichhanne and Mujeeb Ur Rahman to handle their spin-bowling unit. Fidel Edwards and Oshane Thomas are the attacking bowlers for this team while their bowling unit will have the help of all-rounders Carlos Brathwaite and Andre Russell. We know how Andre Russell acts in the t20 format of cricket but his fitness is still an issue for the Tallawahs. Some players who are known as hard-hitter in this format of the cricket-like of Asif Ali, Chadwick Walton, and Glenn Phillips will have to take advantage of the power play. Carlos Brathwaite is another batsman who comes late to bat and also has the hitting ability. On the papers, Tallawahs had a batting order which can destroy the bowling unit of any team of this tournament.

St Lucia Zouks is the most disappointing team of the Caribbean Premier League. The season of 2016 was the only season where they finished at the top-four on the table and remaining all other seasons, they finished at the bottom three. This team had played 66 matches during all editions of CPL T20 with just 20 wins to their name. They had lost 43 matches and their three matches were ended without any result. The winning ratio of this team is just 31.74% in all editions. They finished the previous season of CPL T20 as a second-worst performing team. They could manage to win just three out of ten matches played at the league stage. The lost six matches while their one match was ended with no result.

St Lucia Zouks will start their way to this tournament under the leadership of most experienced players, Darren Sammy but lack of depth in batting and bowling will create many problems for Sammy. Mohammad Nabi is a name of hope of St Lucia Zouks who will be making his comeback in the CPL after the gap of three years. He is a good batsman of t20 format and also a good spin bowler. Rakheem Cornwall will have to take the responsibility of scoring the runs as the previous editions. He scored 254 runs with a good strick rate during the last season of CPL T20. Colin Ingram, Rilee Rossouw, and Anrich Nortje are the players who will be missing from the squad of the Zouks during this season.

Jamaica Tallawahs is full of experienced and best players in the t20 format. The batting order of this team is also strong and some well-known hitter of t20 format is the part of the squad of this team, so the winning chances of today match for Jamaica Tallawahs have been increased. The equation of who will win today’s cricket match prediction and who will win the cricket match today is mentioned as under.

The 3rd Match match of the Caribbean Premier League is going to be played at Brian Lara Stadium, Tarouba, Trinidad. We had observed in the previous matches played here that the pitch here at this venue is good for batting. The track is slower than the others we have seen and helps the spinners quite a bit. We are hoping that the surface is bound to get slower and be a bit more difficult for batting in this match. A score of 185 is going to be tough to chase.

Dream11 fantasy team lineup prediction for Jamaica Tallawahs vs St Lucia Zouks 3rd Match match CPL 2020. After checking the latest players’ availability, which players will be part of both teams, he possible tactics that the two teams might use as we had leaned from previous seasons of the Caribbean Premier League to make the best possible Dream11 team.