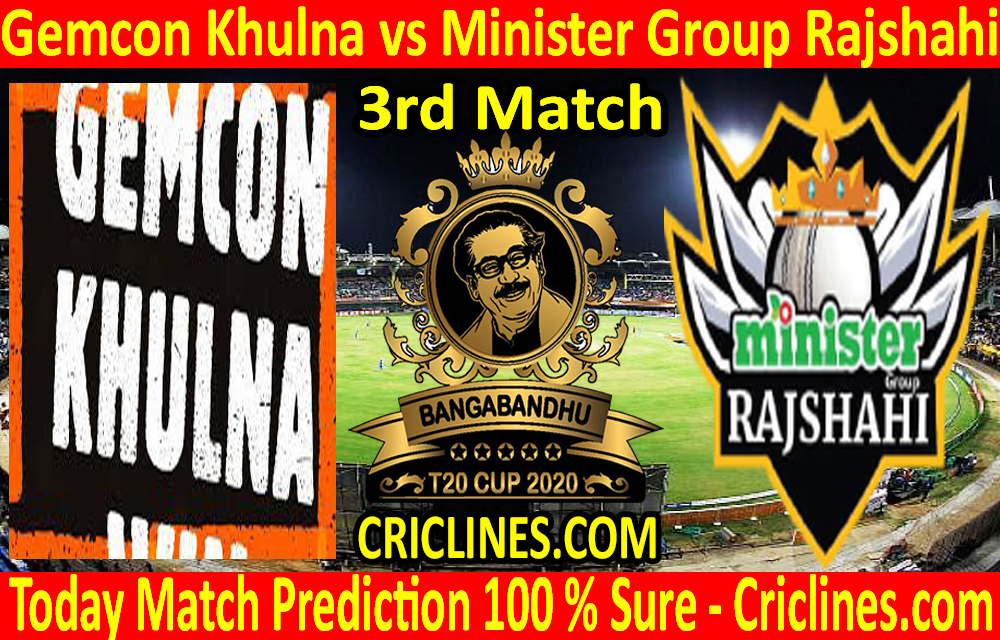 The cricket fans are ready to witness yet another big battle of the B T20 Cup. The 3rd Match match of Bangabandhu T20 Cup 2020 is scheduled to play between Minister Group Rajshahi and Gemcon Khulna on Thursday, 26th November 2020 at Shere Bangla National Stadium, Dhaka. We are posting safe, accurate, and secure today match prediction for all matches of Bangabandhu T20 Cup 2020 free.

Gemcon Khulna had a superb start to this season of the Bangabandhu T20 Cup and won their very first match against Fortune Barishal with a margin of four wickets. They won the toss and decided to bat first. The performance of the bowling unit of Gemcon Khulna was average in that match. They leaked 152 runs in their inning of 20 overs. Shahidul Islam was the most successful and highest wicket-taker from their side who picked four wickets in his four overs bowled out against just 17 runs.

Hasan Mahmud and Shafiul picked two wickets each while Shakib picked one wicket. Al-Amin, and the skipper, Mahmudullah were the bowlers who failed to pick any wicket in the previous match. The performance of the batting order of Gemcon Khulna was outstanding in the previous match. They chased the target of 153 runs in 19.5 overs. Ariful Haque was the highest run-scorer from their side who remained not out after scoring 45 runs. Shamim Hossain scored 26 runs while Shakib Al Hasan had 15 runs to his name.

Minister Group Rajshahi also had a good start to this tournament and won their opening match against Beximco Dhaka with a margin of just two runs. They lost the toss and were asked to bat first. The performance of the batting order of Rajshahi was average in that match. They put a total of 169 runs on the board in their inning of 20 overs. Mahedi Hasan was the most successful batsman from their side who scored 50 runs on 32 deliveries with the help of three boundaries and four sixes. Nurul Hasan scored 39 runs while Anisul Islam Emon could manage to score 35 runs.

The performance of the bowling unit of Minister Group Rajshahi was not impressive in the previous match but they defended the target of 170 runs and leaked 167 runs in their inning of 20 overs. Mahedi Hasan was the most economical bowler from their side who picked one wicket in his four overs bowled out while he was charged for 22 runs. Ibadat Hossain, Arafat Sunny, and Farhad Reza also picked one wicket each while Mukidul Islam was the only bowler who failed to pick any wicket.

The 3rd Match of Bangabandhu T20 Cup season 2020 is scheduled to be held at Shere Bangla National Stadium, Dhaka. The pitch here at this venue is good for batting. It also has a lot of help for the spin bowlers. A total of 180 runs should be a par score.