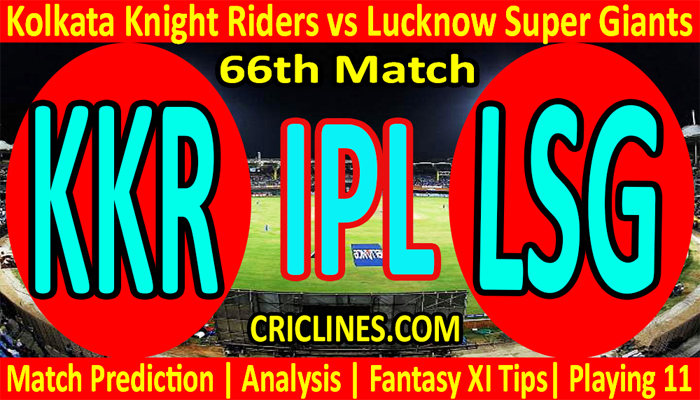 The cricket fans are ready to witness yet another big battle of the IPL 2022. The 66th match of the Indian Premier League 2022 is scheduled to play between Kolkata Knight Riders and Lucknow Super Giants on Wednesday, 18th May 2022 at Dr DY Patil Sports Academy, Mumbai. We are posting safe, accurate, and 100% secure today match prediction of IPL T20 2022 with live IPL socre and ball by ball updates with prediction.

Back to back wins had moved KKR up to the table but we don’t think that they have some chances to move to the playoff of IPL 2022. They had played a total of thirteen matches with just six wins to their name. They had lost seven matches and are situated at the sixth position on the points table. They had beaten Mumbai in their most recent match. On the other side, LSG is the third best performing team of IPL 2022. They were good in the opening matches of this tournament but lost some matches in the middle. At one time, they were leading the points table. They had also played 13 matches at the league matches and had won eight out of these. They had lost five matches and are holding the third position on the table. They are tied in the points with RR but are poor in net run rate. They have to win this match to cement their place in the playoff of IPL 2022.

The batting order of KKR is strong and experianced but we don’t think that they had performed in IPL 2022 as their fans were expecting. Venkatesh Iyer and Ajinkya Rahane are opening the batting inning for KKR but had failed to provide a good opening start to the middle and lower batting order. Nitish Rana, Shreyas Iyer, and Andre Russell are leading the middle batting order while Rinku Singh, Sheldon Jackson, and Pat Cummins are taking care of the lower batting order. These all batters were not good in the previous match against MI where they could manage to score 165 runs in 20 overs. Venkatesh Iyer was the most successful batter with 43 runs to his name on 24 balls with the help of three boundaries and four huge sixes. Nitish Rana also performed well with the bat and scored 43 runs on 26 balls. He also smashed three boundaries and four huge sixes during his inning. Rahane scored 25 runs while Rinku Singh remained not out after scoring 23 runs. No other batter from the side of KKR could even enter into double figure.

Four batters of KKR like Pat Cummins, Sunil Narine, Tim Southee, and Chakaravarthy failed to open the account on the scoreboard. Kolkata won the previous match due to the best and outstanding performance by the bowling department of this team. They defended the target of 166 runs and send the full team of MI back to the pavilion on the total of 113 runs in 17.3 overs. Tim Southee, Pat Cummins, Andre Russell, Sunil Narine, Varun Chakaravarthy, and Venkatesh Iyer are handling the bowling department of KKR. Pat Cummins was the highest wicket-taker from their side with three wickets to his name in three overs against just 22 runs. Andre Russell was also good with the ball. He picked two wickets in 2.3 overs bowled out while he was charged for 22 runs. Tim Southee and Varun Chakaravarthy picked one wicket each while Sunil Narine and Venkatesh Iyer were the bowlers who could not pick any wicket.

We had mentioned above that LSG was good in some opening matches of IPL 2022 but lost the momentum and lost some matches in the middle of this tournament. Their most recent lose came against RR by a huge margin. The bowling department of LSG is experianced and they also have many options to use when needed. Mohsin Khan, Dushmantha Chameera, Avesh Khan, Jason Holder, Ravi Bishnoi, Stoinis, Ayush Badoni, and Krunal Pandya are the bowlers available in the squad of LSG. They were not good in the previous match where they leaked 178 runs in 20 overs. Ravi Bishnoi was the highest wicket-taker from their side who picked two wickets in four overs bowled out against 31 runs. Ayush Badoni, Jason Holder, and Avesh Khan picked one wicket each while Mohsin Khan, Chameera, Krunal Pandya, and Stoinis were the bowlers who could not pick any wicket. LSG has to make some key changes in the bowling department for this match to win this match and we are sure that they will make major changes in the bowling department.

The batting order of LSG is very strong and experianced which is led by KL Rahul and Quinton de Kock. These both openers were not good in some previous matches but we are sure that these batters will give a good opening start to LSG. Ayush Badoni, Deepak Hooda, Krunal Pandya, Marcus Stoinis, Jason Holder, and Dushmantha Chameera are the leading batters of Lucknow. These all are experianced batters and if just one out of the above-mentioned batter perform well, LSG will win this match. Deepak Hooda was the highest run-scorer in the previous match with 59 runs to his name on 39 balls with the help of five boundaries and two huge sixes. Marcus Stoinis was the other batter who put some runs on the board. He scored 27 runs at the strike rate of 158. Krunal Pandya also performed well with the bat and scored 25 runs. Deepak Hooda and Dushmantha Chameera failed to open the account on the scorebaord while Jason Holder and Avesh Khan scored one run each. In our opinion, KL Rahul and Jason Holder will be game chaging players from the side of Lucknow.

KKR vs LSG to Head Matches

Kolkata had played just one match against Lucknow where LSG had won that match with a handsome margin.

Kolkata Knight Riders had won three out of most recent five matches they had played while Lucknow Super Giants had also won three matches out of five recently played matches.

Lucknow Super Giants is overall a stong team when we compare with Kolkata Knight Riders. They have the best players of the t20 foramt of cricket. The batting order of this team is also strong and some well known hitter of t20 format are the part of the squad of this team, so the winning chances of today match for Lucknow Super Giants have been increased. The equation of who will win today cricket match prediction and who will win the cricket match today is mentioned as under.

The toss is going to play an important in the result of each and every match of IPL 2022 as we had observed in the previous matches. According to toss prediction, the team who will win the toss will elect to field first as defending had been dificult in the most recent matches of IPL.

The 66th match of IPL T20, 2022 is going to be held at the Dr DY Patil Sports Academy, Mumbai. We had observed in the previous matches played here that the pitch here at this venue is good for batting in early overs. The track has a good amount of pace and bounce which allow the batsmen for the good cricketing shorts but this groung also have big boundaries which can be a plus point for the bowlers. A score of 190 plus seems to be a par score.

The weather forecast for Mumbai is good this cricket match. There are almost no chances of rain in the region and we are hopeful that we will have a full match to enjoy.

Abhishek Sharma, Umran Malik, and Daniel Sams are the key players to watch in this match.

Dream11 fantasy team lineup prediction for Kolkata Knight Riders vs Lucknow Super Giants 66th Match IPL 2022. After checking the latest players availibity, which players will be part of the both teams, the possible tactics that the two teams might use as we had leaned rom previous seasons of Indian Premier League to make the best possible Dream11 team.

We will update your shortly.

We had provided you the above-mentioned IPL prediction on the basis of our research, understanding, and analysis. These prediction tips are also based the the reports which we have from our different source. You can consider the point we had provided you and the final decision will be yours that you have to make at your own risk.