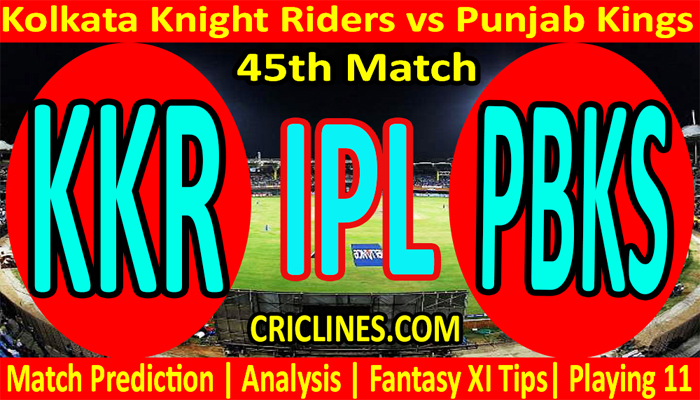 The world is ready to witness yet another big battle of the IPL T20. The 45th Match of the Indian Premier League is scheduled to play between Kolkata Knight Riders and Punjab Kings on Friday, 1st October 2021 at Dubai International Cricket Stadium, Dubai. We are posting safe, accurate, and 100% secure today match prediction for all matches of IPL T20 free.

Kolkata Knight Riders vs Punjab Kings still have a chance to reach the next level of this edition of IPL. Kolkata Knight Riders had won five out of six matches played so far and are holding the 4th position on the points table while Punjab Kings had also played 11 matches with just four wins to their name. They had lost seven matches and are situated at the 6th spot on the table. Both teams had three matches left and almost all matches are must-win for both teams to move to the next level of this tournament.

Kolkata Knight Riders had a brilliant start to this second half of IPL and won three out of four matches played. They had beaten the best performing team of this tournament, Delhi Capitals in their most recent match by the margin of three wickets. The way how the bowling department of Kolkata Knight Riders performed in the previous match was just outstanding. They leaked 127 runs in their inning of 20 overs. Sunil Narine was the most successful bowler from their side who picked two wickets in his four overs bowled out against 18 runs.

Lockie Ferguson and Venkatesh Iyer also had an outstanding performance in the previous match and picked two wickets each while Tim Southee had one wicket to his name. The batting order of Kolkata Knight Riders failed to give the best performance on the pitch which was in the favor of the spin bowlers but they chased the target of 128 runs in 18.2 overs. Nitish Rana was the most successful and highest run-scorer from their side who remained not out after scoring 36 runs on 27 deliveries with the help of two boundaries and the same huge sixes. Shubman Gill scored 30 runs while Sunil Narine smashed the inning of 21 runs on just 10 balls. He smashed one boundary and two huge sixes during his inning.

Punjab Kings had lost their most recent match against Mumbai Indians by the margin of six wickets. The middle batting order of this team once again failed to give the best performance. They could manage to score 135 runs in their inning of 20 overs even after having a good start. Aiden Markram was the most successful and highest run-scorer from their side who scored 42 runs on 29 deliveries with the help of six boundaries during his inning. Deepak Hooda scored 28 runs while KL Rahul could manage to score 21 runs.

The bowling unit of Punjab Kings also failed to give the best performance in the previous match against Mumbai Indians. They failed to defend the target of 136 runs and leaked this target in 19 overs. Ravi Bishnoi was the only successful bowler from their side who picked three wickets in his four overs bowled out while he was charged for 25 runs. Mohammed Shami and Nathan Ellis picked one wicket each while Aiden Markram, Arshdeep Singh, and Harpreet Brar were the bowlers who failed to pick any wicket in the previous match.

There is no doubt that Punjab Kings is a strong and well-balanced team and has a strong batting and bowling department which is in good form. The batting and bowling squad of this team is much stronger at least on papers. According to the match prediction, Punjab Kings is the favorite team who will win this match. There are many factors that make Punjab Kings a favorite team to win this match. Some of the key factors are mentioned as under:

Punjab Kings is overall a strong team than Kolkata Knight Riders. They have the best players of the t20 format. The batting order of this team is also strong and some well-known hitters of the t20 format are part of the squad of this team, so the winning chances of today’s match for Punjab Kings have been increased. The equation of who will win today’s cricket match prediction and who will win the cricket match today is mentioned as under.

The 45th Match of IPL T20, 2021 is going to be held at the Dubai International Cricket Stadium, Dubai. We had observed in the previous matches played here that the pitch here at this venue is good for batting in early overs. We had seen a total score of near about 220 runs in the most recent three matches played here. The track has a good amount of pace and bounce which allows the batsmen for the good cricketing shorts but this ground also has big boundaries which can be a plus point for the bowlers. A score of 180 plus seems to be a par score.

KL Rahul, Lockie Ferguson, and Aiden Markram are the key players to watch in this match.

Dream11 fantasy team lineup prediction for Kolkata Knight Riders vs Punjab Kings 45th Match IPL 2021. After checking the latest players’ availability, which players will be part of both teams, the possible tactics that the two teams might use as we had learned from previous seasons of the Indian Premier League to make the best possible Dream11 team.