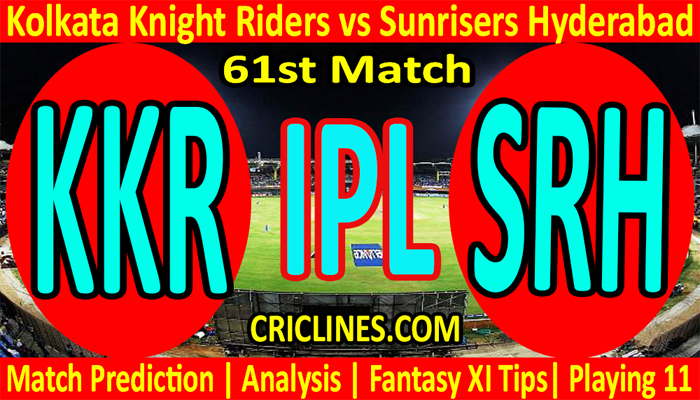 The world is ready to witness yet another big battle of the IPL 2022. The 61st match of the Indian Premier League 2022 is scheduled to play between Kolkata Knight Riders and Sunrisers Hyderabad on Saturday, 14th May 2022 at Maharashtra Cricket Association Stadium, Pune. We are posting safe, accurate, and 100% secure today match prediction of IPL T20 2022 with live IPL score and ball by ball updates with prediction.

KKR is back on the winning track after losing almost six matches in a row. They had now played twelve matches with just five wins to their name. They had lost seven matches and are situated at the seventh position on the table. They are tied in the points with SRH and Punjab but are poor in net run rate than Hyderabad. They had beaten Mumbai in their most recent match. We don’t think that they are in the race for a playoff. On the other side, Sunrisers Hyderabad had played eleven matches with five wins to their name. They had lost six matches and are holding the sixth position on the points table. SRH had lost the last four matches in a row and their most recent loss came against RCB by a huge margin. In our opinion, they are also out from the playoff of IPL 2022. Many IPL prediction providers are going with SRH but our reports confirm that KKR will win this match.

KKR had struggled with the batting order in some previous matches and the most recent match against MI was a big example of it. They could manage to score 165 runs in 20 overs. Venkatesh Iyer and Rahane are opening the batting inning of Kolkata but these batters had failed to provide a good start to the team. Nitish Rana, Shreyas Iyer, and Andre Russell are handling the middle batting order but they also had failed in previous matches. Rinku Singh, Jackson, Pat Cummins, and Sunil Narine are available to handle the lower batting order. Venkatesh Iyer was the most successful batter in the previous match with 43 runs to his name on 24 balls with the help of three boundaries and four huge sixes. Nitish Rana also had 43 runs to his name but he faced 26 balls for this and smashed three boundaries and four huge sixes. Rahane scored 25 runs while Rinku Singh remained not out after scoring 23 runs. Four batters of KKR including Pat Cummins, Sunil Narine, Southee, and Varun Chakravarthy were the batters who could not open the account on the scoreboard.

We think that the management of KKR needs some make some key changes in the batting order for the final playing eleven of this match. The bowling department of Kolkata had been good in IPL 2022 than the batting order. KKR had won most matches due to the best bowling performances. The previous match against Mumbai is a big example of it where they defended the target of 166 runs and send the full team of MI back to the pavilion on a total of 113 runs in 17.3 overs. Tim Southee and Pat Cummins are leading the bowling department with Andre Russell, Sunil Narine, Varun Chakravarthy, and Venkatesh Iyer and these all bowlers are performing well. Pat Cummins was the most successful bowler in the previous match with three wickets to his name in four overs against 22 runs. Pat Cummins also performed well and picked two wickets in 3.2 overs bowled out while he was charged for 22 runs. Tim Southee and Varun Chakravarthy picked one wicket each while Venkatesh Iyer and Sunil Narine were the bowlers who could not pick any wicket. We think that the KKR doesn’t need to make any changes in the bowling department.

SRH had lost momentum and had failed to give the best performance in any department of the game. They had failed in batting, bowling, and even fielding. The bowling department of Hyderabad was very poor in the previous match against RCB where they leaked 192 runs in 20 overs. J Suchith and Bhuvneshwar Kumar are leading the bowling department with Fazalhaq Farooqi, Kartik Tyagi, Umran Malik, and Abhishek Sharma but none of the above-mentioned bowlers had been good so far in IPL 2022. Many of us were expecting that Umran Malik will perform well in IPL but he had not been good. His bowling speed in good but had failed to maintain the line and length. J Suchith was the only successful bowler in the previous match with two wickets to his name in four overs against 30 runs. Kartik Tyagi picked one wicket but he leaked a lot of runs. He was charged for 42 runs in four overs. Umran Malik, Bhuvneshwar Kumar, Fazalhaq Farooqi, and Umran Malik were the bowlers who could not pick any wicket.

Fazalhaq Farooqi leaked 47 runs in four overs while Umran Malik was charged for 25 runs in just two overs. The batting order of SRH is also facing some issues since some previous matches. The opening pair of Hyderabad Abhishek Sharma and Kane Williamson totally failed in the previous match and both openers came back to the pavilion without scoring any runs. Rahul Tripathi, Aiden Markram, and Nicholas Pooran are taking care of the middle batting order and they are performing well but their lower batting order like Jagadeesha Suchith, Shashank Singh, Kartik Tyagi, and Bhuvneshwar Kumar had also failed in IPL 2022. Kartik Tyagi and Umran Malik were the other batters who could not open the account on the scoreboard. Rahul Tripathi was the only successful batter from the side of SRH with 53 runs to his name on 37 balls with the help of six boundaries and two huge sixes. Aiden Markram also performed well with the bat and scored 21 runs while Nicholas Pooran had just 19 runs to his name. The management of SRH should take some urgent actions and should make some key changes in the batting and bowling departments for this match otherwise, the result will be the same as in previous matches.

KKR had faced SRH in 22 matches where they had won 14 matches while Hyderabad had won just eight matches.

Kolkata Knight Riders had won two out of the most recent five matches they had played while Sunrisers Hyderabad had won just one match out of five recently played matches.

Kolkata Knight Riders is overall a strong team when we compare with Sunrisers Hyderabad. They have the best players in the t20 format of cricket. The batting order of this team is also strong and some well-known hitters of the t20 format are part of the squad of this team, so the winning chances of today’s match for Kolkata Knight Riders have been increased. The equation of who will win today’s cricket match prediction and who will win the cricket match today is mentioned as under.

The 61st match of IPL T20, 2022 is going to be held at the Maharashtra Cricket Association Stadium, Pune. We had observed in the previous matches played here that the pitch here at this venue is good for batting in early overs. The track has a good amount of pace and bounce which allows the batsmen to the good cricketing shorts but this ground also have big boundaries which can be a plus point for the bowlers. A score of 190 plus seems to be a par score.

Pat Cummins, Andre Russell, and Rahul Tripathi are the key players to watch in this match.

Dream11 fantasy team lineup prediction for Kolkata Knight Riders vs Sunrisers Hyderabad 61st Match IPL 2022. After checking the latest player’s availability, which players will be part of both teams, the possible tactics that the two teams might use as we had learned from previous seasons of Indian Premier League to make the best possible Dream11 team.