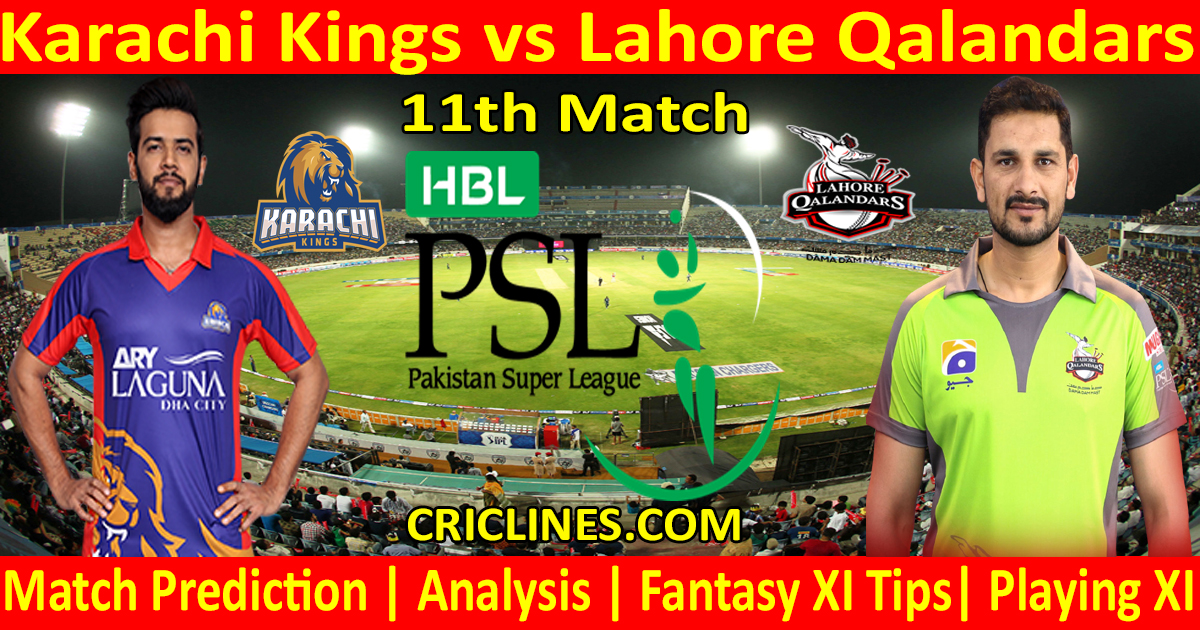 The cricket fans are ready to witness yet another big battle of PSL T20. The 11th Match of Pakistan Super League 2021 is scheduled to play between Karachi Kings and Lahore Qalandars on Sunday, 28th February 2021 at National Stadium, Karachi. We are posting safe, accurate, and secure today match prediction for all matches of PSL free.

Three wins in two matches had put Karachi Kings on the top of the points table of this season six of the Pakistan Super League. We had observed that the batting order of the Karachi Kings had played a key role for every win of this team as compared to the bowling department who had leaked plenty of runs in almost every match as they leaked 195 runs in their previous match against Multan Sultans. The key bowlers of the Kings had failed to give an early breakthrough to the team. Arshad Iqbal, Daniel Christian, Waqas Maqsood, Mohammad Amir, Mohammad Nabi, the skipper, Imad Wasim had not given any best performance when it comes to bowling. Arshad Iqbal picked two wickets in the previous match against Multan Sultans by against 36 runs in four overs.

The batting order of Karachi Kings had performed well in almost all matches and they are also in superb form. The opening pair of the Kings, Babar Azam and Sharjeel khan are in outstanding form. They had a record partnership for the first wickets of 176 runs which is a record. Babar Azam had was low in the strick rate in some previous matches, improved his strick rate in the most recent match against Multan Sultans, and put 90 runs on the board on just 60 balls with the help of 13 boundaries and one six. Joe Clarke scored some runs in the very first match of the PSL T20 but failed to score runs in the second match. He smashed the inning of 54 runs in just 26 deliveries. Colin Ingram, Mohammad Nabi, and the skipper, Imad Wasim, all have the ability of run-scoring in the middle and last overs.

Lahore Qalandars had also won two out of three matches but due to low run-rate, they are holding the 4th position on the points table. The batting order of the Qalandars is strong and also in good form but they failed to put some big runs on the board in the most recent match against Multan Sultans. Mohammad Hafeez continued his good form in the previous match and scored 60 runs on 35 balls with the help of three boundaries and five sixes but unfortunately, he was run-out Usman Qadir. Fakhar Zaman failed once again after smashing the inning of 81 runs in the earlier match and could manage to score just seven runs. Joe Denly also put some runs on the board. He scored 31 runs while Samit Patel had 26 runs to his name. Ben Dunk had almost failed to give his best performance in all three matches played so far.

The bowling department of Lahore Qalandars had performed well overall in the all previously played matches. Shaheen Afridi had given an early breakthrough to the Qalandars in almost each and every match but Haris Rauf had failed to perform as per our expectations. Salman Mirza had been an economical bowler but had failed to pick wickets. Samit Patel, Ahmed Daniyal, and David Wiese had also failed to get their team over the line. As Rashid Khan had left the team due to his international duty, Shaheen Afridi and Haris Rauf had to fill his place.

The 11th Match of Pakistan Super League season 2021 is scheduled to be held at National Stadium, Karachi. The pitch here at this venue is flat good for batting as there is no bounce and pace. Outfield on this venue is very fast and the ball will travel to the boundary very quickly. It also has a lot of help for the spin bowlers but almost all teams in this tournament have a strong batting order so this does not matter. According to the cricket match prediction, a total of 180 runs should be as a par score.

While we had a deep look at the squad, we think that Karachi Kings is going to perform well in this season of the PSL T20 as they have a couple of players who can change the game. In this match, the batting and bowling department of the Sultans is much stronger as compared to the United. We also have reports from different sources for the win of the Sultans.