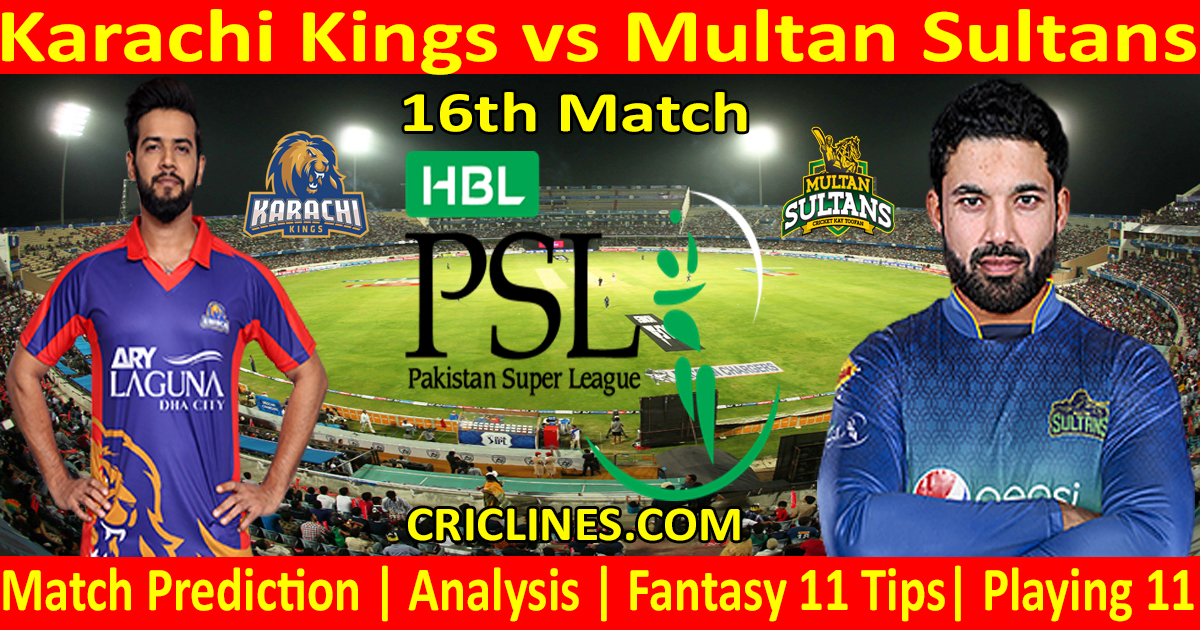 The world is ready to witness yet another big battle of PSL T20. The 16th Match of Pakistan Super League 2021 is scheduled to play between Karachi Kings and Multan Sultans on Friday, 5th March 2021 at National Stadium, Karachi. We are posting safe, accurate, and secure today match prediction for all matches of PSL free.

The defending champions, Karachi Kings had performed well in the previous matches played so far. Three wins in five matches had put the Kings on the top of the points table. The batting order of Karachi Kings had proved that they are the strongest among all other teams of this tournament. The opening pair of the Kings, Babar Azam and Sharjeel Khan had been outstanding so far. Mohammad Nabi is the other batsmen who had put some runs in almost each and every match of this tournament. Joe Clarke also had shown his strength in this tournament and Colin Ingram is the other batsman who had shown some hard-hitting in the previous matches. Daniel Christian also had performed well in all matches so far. Karachi Kings had batting till the 8th wicket which shows how the batting of the Kings is strong.

The bowling department of the Karachi Kings also had performed well in this season six of the Pakistan Super League. Mohammad Amir had taken an early wicket in almost each and every match of this tournament. Mohammad Ilyas also had given his best performance so far. Abbas Afridi was tested for the first time in the history of PSL and he gave the best performance. He picked two wickets in his four overs bowled out against just 27 runs. Arshad Iqbal and Daniel Christian also had performed well in the previous matches. Mohammad Nabi also had performed well with the ball in this tournament so far. The skipper, Imad Wasim tried to bowl in the previous match but he was charged for 16 runs in his only over bowled out.

Multan Sultans had disappointed its fans around the world during this season of PSL T20. A strong and experienced team who have the players like Shahid Afridi, Imran Tahir, James Vince, Rilee Rossouw, Carlos Brathwaite, and Sohaib Maqsood in the squad, had won just one out of five matches played so far. The batting order of this team had almost failed to perform well. The skipper, Mohammad Rizwan is the one and only batsmen from their side who had scored runs in almost all matches. He is the highest run-scorer in this season six of the Pakistan Super League but he had not the support of any other player. The top and middle batting order of the Sultans had almost failed to give their best performance.

Multan Sultans had been struggling when it comes to the bowling department. Shahnawaz Dhani is the only bowler from their side who had been consistent in wicket-taking but he also had leaked plenty of runs. Sohail Khan, Imran Khan, Carlos Brathwaite, and Khushdil Shah had almost failed to perform well in this tournament. Imran Tahir was given a chance in the previous match but he also failed to give his best performance. He picked two wickets in his four overs bowled out while he was charged for 29 runs. Shahid Afridi played in the first four matches but failed to get the Sultans over the line. Half of the matches of Multan Sultans had been played and now, they have no chance to repeat the mistakes and have to give an outstanding performance in up-coming matches.

The toss had played a key role in the decision of all previously played matches of Pakistan Super League season six. We had seen in the previous editions of this tournament that chase is the best option for the both teams at the venue of Karachi. Almost 85% of matches had been won by the bowling first. According to our toss prediction, the team who will win the toss may choose to field first.

The 16th Match of Pakistan Super League season 2021 is scheduled to be held at National Stadium, Karachi. The pitch here at this venue is flat good for batting as there is no bounce and pace. Outfield on this venue is very fast and the ball will travel to the boundary very quickly. It also has a lot of help for the spin bowlers but almost all teams in this tournament have a strong batting order so this does not matter. According to the cricket prediction, a total of 180 runs should be a par score.