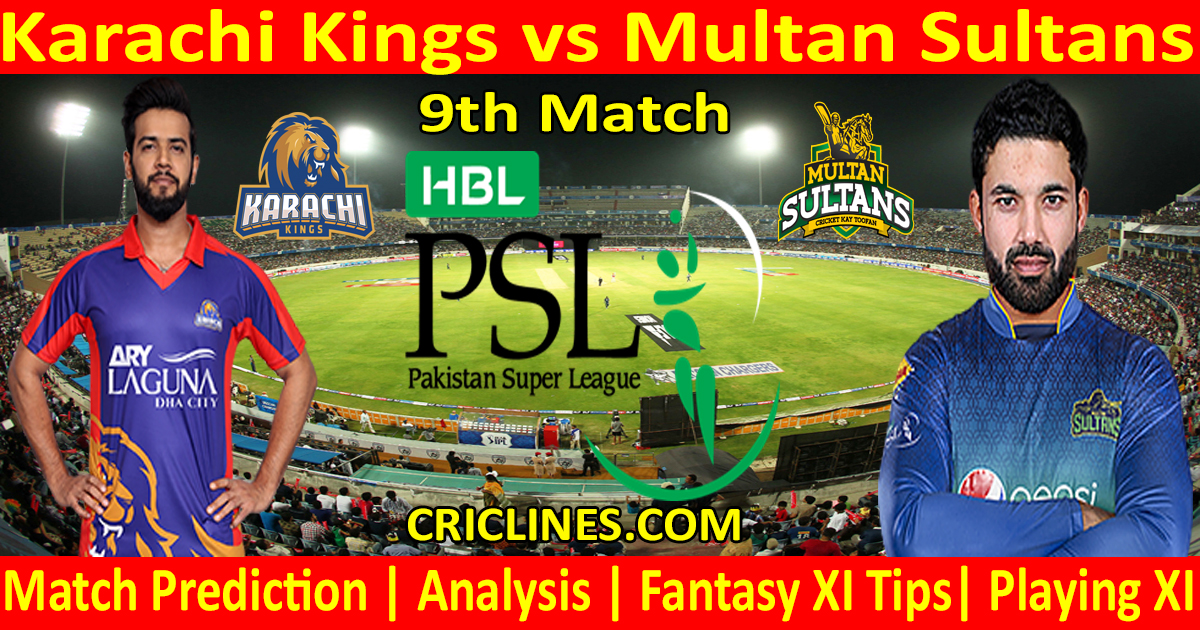 The cricket fans are ready to witness yet another big battle of PSL T20. The 9th Match of Pakistan Super League 2021 is scheduled to play between Karachi Kings and Multan Sultans on Saturday, 27th February 2021 at National Stadium, Karachi. We are posting safe, accurate, and secure today match prediction for all matches of PSL free.

After having a good start to season six of the Pakistan Super League, Karachi Kings won the second match that they must win. The way how the batting order of the Karachi Kings performed in the previous match was just outstanding. They had an opening wicket partnership of 176 runs which is a record in the history of PSL. Sharjeel Khan scored his third century of Pakistan Super League in that match. He scored 105 runs on 59 deliveries with the help of nine boundaries and eight sixes. Babar Azam also had an outstanding performance with the bat. He scored 62 runs. We had observed that the strick rate of Babar Azam had been down since some previous matches. Joe Clarke, Colin Ingram, Mohammad Nabi, Daniel Christian, and Imad Wasim, all can bat well for the Kings.

Karachi Kings must win the previous match against Islamabad United if their bowling unit gives a bit better performance but they failed to do so. Seven bowlers were used by the skipper, Imad Wasim but no bowler can get the Kings over the line. Mohammad Nabi was given the bowling in that match for the first time and he gives his best. He picked one wicket against 36 runs in his four overs bowled out. Arshad Iqbal, Waqas Maqsood, Mohammad Amir, and Imad Wasim picked one wicket each. Aamer Yamin and Daniel Christian failed to pick any wicket. Mohammad Amir leaked 44 runs in his four overs while Aamer Yamin leaked 29 runs in just one over bowled out.

Multan Sultans lost two early matches but they bounced back strongly in the third match against Lahore Qalandars and won that match with a handsome margin of seven wickets. Sohail Khan replaced Sohail Tanveer who performed well. He leaked 24 runs in his four overs bowled out but failed to pick any wicket. Carlos Brathwaite proved the most successful bowler from the Sultans side who picked two wickets in his four overs bowled out against just 20 runs. Shahnawaz Dhani also picked two wickets in his four overs against 39 runs while Usman Qadir had one wicket to his name. Shahid Afridi proved the most expensive bowler as he leaked 41 runs and remained wicketless.

The new skipper of the Multan Sultans, Mohammad Rizwan is in the best form of his life and he showed this in this match. He put 76 runs on the board on just 49 deliveries with the help of 12 boundaries. Now, he is the highest run-scorer of PSL 6 so far with a total of 188 runs to his name. Sohaib Maqsood also had got his form back and scored 61 runs in no time. He faced just 42 deliveries and smashed seven boundaries and two sixes. Chris Lynn and James Vince failed to give the best performance in the previous match. Multan Sultans have some well-known batsmen of t20 format of cricket which can play a key role for Multan Sultans at any stage of the game.

The 9th Match of Pakistan Super League season 2021 is scheduled to be held at National Stadium, Karachi. The pitch here at this venue is flat good for batting as there is no bounce and pace. Outfield on this venue is very fast and the ball will travel to the boundary very quickly. It also has a lot of help for the spin bowlers but almost all teams in this tournament have a strong batting order so this does not matter. According to the cricket match prediction, a total of 180 runs should be a par score.

While we had a deep look at the squad, we think that Karachi Kings is going to perform well in this season of the PSL T20 as they have a couple of players who can change the game. In this match, the batting and bowling department of the Sultans is much stronger as compared to the United. We also have reports from different sources for the win of the Sultans.