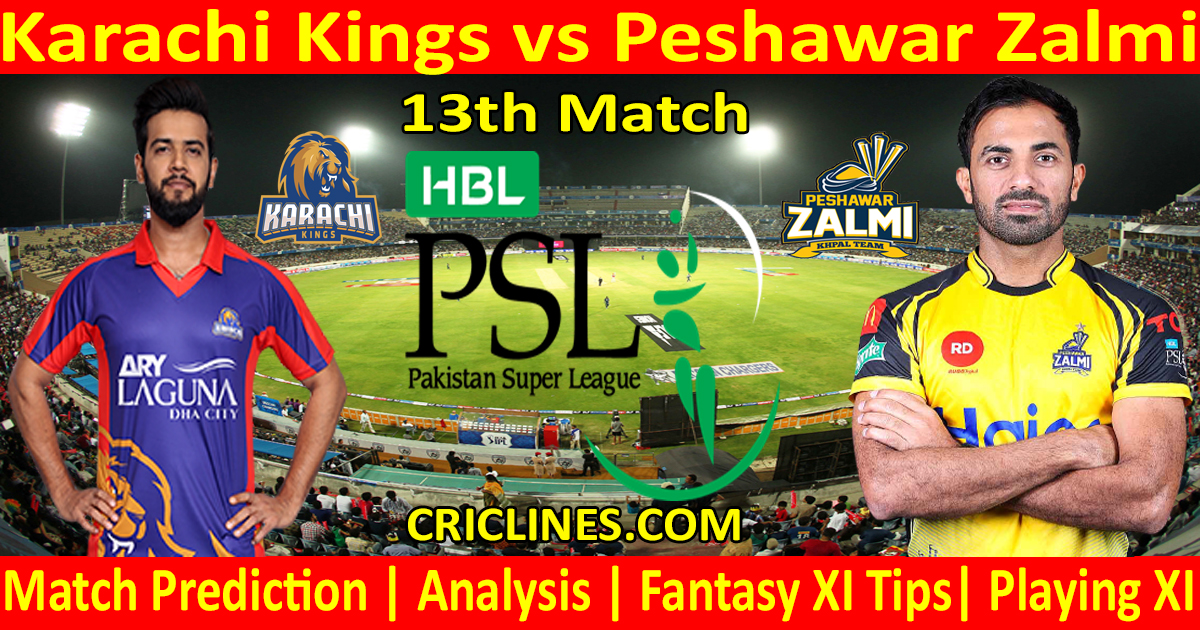 The cricket fans are ready to witness yet another big battle of PSL T20. The 13th Match of Pakistan Super League 2021 is scheduled to play between Karachi Kings and Peshawar Zalmi on Wednesday, 3rd March 2021 at National Stadium, Karachi. We are posting safe, accurate, and secure today match prediction for all matches of PSL free.

The defending champions, Karachi Kings had won two out of four matches played so far and are holding the 3rd position on the points table of Pakistan Super League season six. They had lost their most recent match against Lahore Qalandars by the margin of six wickets. The top batting order of the Kings was rocked by Qalandars and their key batsmen Joe Clarke, Colin Ingram, and Babar Azam failed to enter into double-figure. Sharjeel Khan put some runs on the board. He scored 64 runs on 39 deliveries with the help of five boundaries and six huge sixes. He was given a chance as his easy catch was dropped by the Qalandars. Mohammad Nabi also played a superb inning of 57 runs. Joe Clarke, Babar Azam, and Mohammad Nabi are in good batting form for the Kings.

There is no doubt that the bowling department of Karachi Kings is strong and they also had proved it. Mohammad Amir had given early breakthrough in almost all matches and he was also outstanding against Lahore Qalandars. Arshad Iqbal had given his best performance in almost all matches but he failed to perform against Lahore Qalandars. The other bowlers of Karachi Kings like Arshad Ilyas, Daniel Christian, Mohammad Nabi, and Waqas Maqsood had been good throughout the tournament but unfortunately, they failed to stop the batting order of Lahore Qalandars from scoring the runs in the middle and last overs. The skipper, Imad Wasim is not bowling in some previous matches but we know that he is a good spinner and also his wicket-taking abilities.

After losing the first match of this season of Pakistan Super League, Peshawar Zalmi had won three matches in a row and now, they are leading the points table. Zalmi is one of the most exciting teams of this tournament and is also unpredictable. They also have some best finishers in their squad which is a plus point. The performance of the bowling department of Zalmi had been interesting. The skipper, Wahab Riaz leaked more than a hundred runs in the two matches but the way how they bowled against Islamabad United in the previous match, was just outstanding. He picked four wickets in his four overs against just 17 runs. Mohammad Imran, Saqib Mahmood, Mujeeb ur Rehman, and Umaid Asif are still to prove.

Imam ul Haq is the only batter from the Zalmi side who had failed to put some runs on the board with a massive strick rate. The top batting order of Zalmi is also good. Kamran Akmal and Tom Kohler-Cadmore are in good form and this is a good sign for this team. The middle-order batting lineup of the Peshawar Zalmi is strong as compared to the other teams of this tournament and they had proved this in the previous matches. Sherfane Rutherford, Haidar Ali, Shoaib Malik, and even Wahab Riaz have the hard-hitting capability in the middle and last overs. The bowling unit of Peshawar Zalmi had to give the best performance against the strong batting order of the Kings in this match.

The 13th Match of Pakistan Super League season 2021 is scheduled to be held at National Stadium, Karachi. The pitch here at this venue is flat good for batting as there is no bounce and pace. Outfield on this venue is very fast and the ball will travel to the boundary very quickly. It also has a lot of help for the spin bowlers but almost all teams in this tournament have a strong batting order so this does not matter. According to the live cricket score, a total of 180 runs should be a par score.

The weather forecast in Karachi is good for a cricket match. The forecast is predicting almost no chances of rain on match day and we will have a full match to watch.