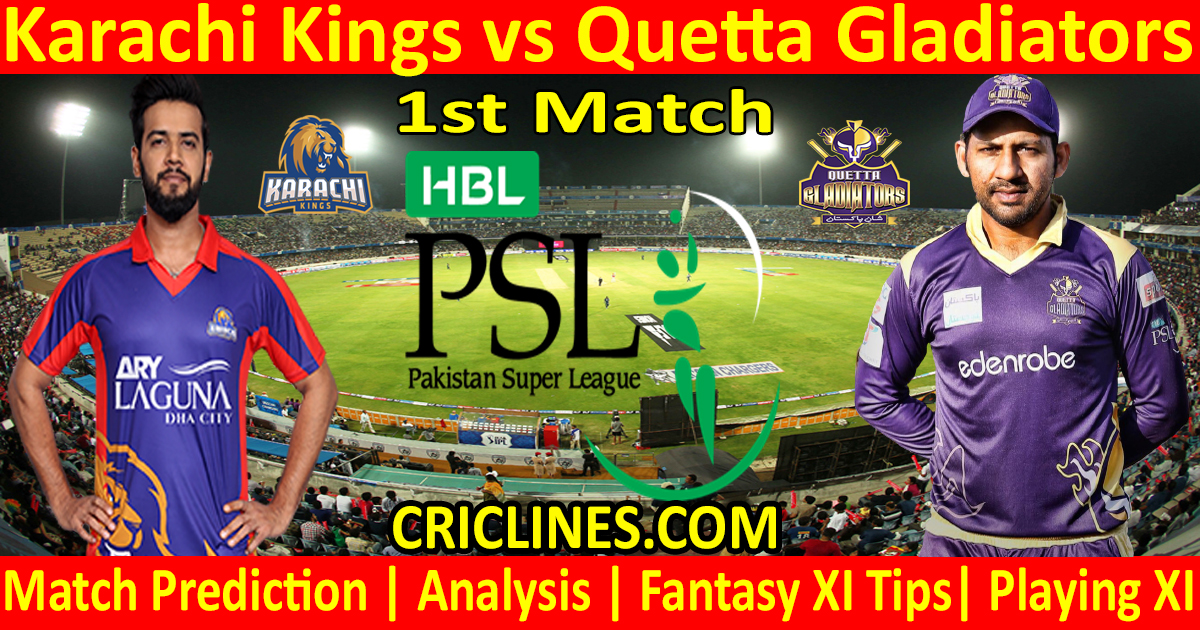 The cricket fans are ready to witness yet another big battle of PSL T20. The 1st match of Pakistan Super League 2021 is scheduled to play between Karachi Kings and Quetta Gladiators on Saturday, 20th February 2021 at National Stadium, Karachi. We are posting safe, accurate, and secure today match prediction for all matches of PSL free.

Karachi Kings are the defending champions of this edition of the Pakistan Super League. They were the second-best performing team of the previous season of PSL T20. They won five out of 10 matches played at the league stage. They lost four matches while their one match was ended without any result. They were holding the 2nd position on the points table after the end of the league stage matches. They won the qualifier match against Multan Sultans in the super over and made their way to the final where they beat Lahore Qalandar in the final match with the margin of five wickets. The regular captain of this team, Imad Wasim is going the lead during this edition of the PSL T20. Some key changes had been made in the final squad of this team. Mohammad Nabi is the latest edition in the squad of the Kings who is one of the best all-rounders around the world.

Quetta Gladiators had won the maximum titles of Pakistan Super League but they failed to perform well in the previous edition. They were the second-worst performing team of the previous season of the PSL T20. They could manage to win just four out of 10 matches played at the league stage. The five matches while their one match was ended with no result. They were laying at the second position from the bottom of the points table after the end of the league stage matches. Quetta Gladiators had picked some big names of cricket in the auction like Chris Gayle. Chris Gayle will be playing for the 2nd time in PSL. The first time he played for Lahore Qalandar where he failed to score some big runs. It will be interesting to see him in the action as he is in good form. He had smashed the inning of 84 runs in just 22 balls in T10 League.

We don’t think that the batting order of Quetta Gladiators is strong as compared to the other teams of this tournament. Chris Gayle, Usman Khan, and Saim Ayub are in the top order batting lineup. Some batting all-rounder is part of the squad of Gladiators. Cameron Delport, Azam Khan, Tom Banton, and the skipper, Sarfaraz Ahmed can bat well in the death overs. Azam Khan is in good form as we had observed in the recent season of the T10 League. Mohammad Nawaz and Ben Cutting can also bat. The strength of Quetta Gladiators is bowling. Some well-known as best bowlers of the shorter format of cricket are the part of the squad of this team. Mohammad Hasnain, Naseem Shah, Anwar Ali, Usman Shinwari, Qaid Ahmad, Dale Steyn, Abdul Nasir, Arish Ali Khan, and Zahid Mahmood will be handling the bowling department of the Gladiators. Zahid Mahmood had his debut in international cricket for Pakistan against South Africa in the third t20 match where he gave his best performance and picked three wickets in no time.

The toss is going to play a key role in the decision of all matches of the Pakistan Super League. We had seen in the previous editions of this tournament that chase is the best option for both teams. According to our toss prediction, the team who will win the toss may choose to field first.

The 1st match of Pakistan Super League season 2021 is scheduled to be held at National Stadium, Karachi. The pitch here at this venue is good for batting. It also has a lot of help for the spin bowlers. As per cricket match prediction, a total of 190 runs should be as a par score.