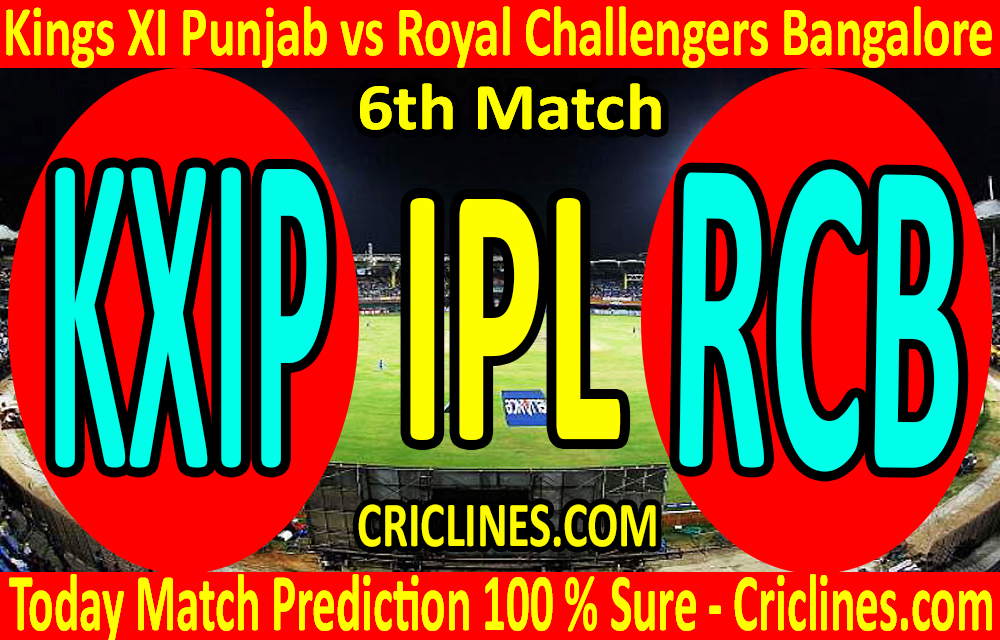 The world is ready to witness yet another big battle of the Indian Premier League. The 6th Match match of Dream11 IPL T20 2020 is scheduled to play between Kings XI Punjab and Royal Challengers Bangalore on Thursday, 24 September 2020 at Dubai International Cricket Stadium, Dubai. We are posting safe, accurate, and secure today match prediction for all matches of IPL T20 free.

Kings XI Punjab performed well in the opening match of this season of the Indian Premier League but failed to register their first win. They lost the first match against Delhi Capitals which they could easily win. The match was tied and the decision of this match was made in the super over as they failed to score just one run on the last three deliveries of their inning. They won the toss and decided to field first in their very opening match. The performance of their bowling unit was outstanding in the early overs. They sent the three best batsmen of the Delhi back to the pavilion on a total of just 13 runs. They leaked 157 runs in their inning of 20 overs. Mohammed Shami was the most successful and highest wicket-taker from their side in the previous match who picked three wickets in his four overs bowled out against just 15 runs. Sheldon Cottrell also had a good performance with the ball. He picked two wickets in his four overs bowled out while he was charged for 24 runs. Chris Jordan and K Gowtham were the bowlers who failed to pick any wicket in the previous match while Ravi Bishnoi had one wicket to his name.

The batting order of Kings XI Punjab performed well in the previous match but failed to chase the target of 158 runs. They could also manage to score 157 runs in their inning of 20 overs. They had a good opening start of 30 runs but they lost their key four-wicket while reaching the score of 35 runs. Mayank Agarwal was the most successful and highest run-scorer from their side who scored a total of 89 runs on just 60 deliveries with the help of seven boundaries and four sixes. The skipper, Lokesh Rahul also had a good performance with the bat. He scored 31 runs on 19 balls and smashed two boundaries and one six. Krishnappa Gowtham scored 20 runs on 14 deliveries while Sarfaraz Khan had 12 runs to his name. Karun Nair and Glenn Maxwell scored just one run each and Nicholas Pooran failed to open his account on the scoreboard.

Royal Challengers Bangalore changed their history of losing the first match of Indian Premier League and won their opening match of this tournament against Sunrisers Hyderabad with a margin of 10 runs. They lost the toss and were asked to bat first. The way how their batting order performed in that match was just outstanding. They scored a total of 163 runs in their 20 overs inning. Devdutt Padikkal who was the debutant of Indian Premier League had an outstanding performance with the bat. he was the most successful and highest run-scorer from their side who scored 56 runs on 42 deliveries with the help of eight boundaries. AB de Villiers also had a superb performance with the bat in the opening match of Dream11 IPL. He smashed the inning of 51 runs on just balls and smashed four boundaries and two huge sixes. Aaron Finch scored 29 runs in the previous match while the skipper, Virat Kohli had 14 runs to his name. Shivam Dube and Josh Philippe remained not out till the end of their inning.

The way how the bowling unit of Royal Challengers Bangalore performed in the previous match was just outstanding. They defended the target of 164 runs and leaked 153 runs in their inning of 20 overs. They were nowhere in the game till the first half of their bowling inning but they made their comeback in the second half. They leaked just 38 runs in the last 10 overs of their inning. Yuzvendra Chahal was the most successful bowler from their side who picked three wickets in his four overs bowled out against just 18 runs. Shivam Dube also had a good performance with the bat. He picked two wickets in his three overs bowled out against 15 runs. Navdeep Saini also picked two wickets but the was charged for 25 runs in his four overs bowled out. Dale Steyn picked one wicket in his 3.3 overs bowled out while he leaked 33 runs. Umesh Yadav was the bowler from their side who leaked plenty of runs. He was charged for 48 runs in his four overs bowled out. He failed to pick any wicket.

Royal Challengers Bangalore is full of experienced and young players in the t20 format. The batting order of this team is also strong and some well-known hitter of t20 format is the part of the squad of this team, so the winning chances of today match for Kings XI Punjab have been increased. The equation of who will win today’s cricket match prediction and who will win the cricket match today is mentioned as under.

The toss is going to play an important role in the result of each and every match of the Indian Premier League as we had observed in the previous matches. According to our toss prediction, the team who will win the toss will elect to field first as there is some rain expected and can make the batting a bit difficult.

The 6th Match match of the Indian Premier League is going to be held at the Dubai International Cricket Stadium, Dubai. We had observed in the previous matches played here that the pitch here at this venue is good for batting. The track is slower than the others we have seen and helps the spinners quite a bit. We are hoping that the surface is bound to get slower and be a bit more difficult for batting in this match. A score of 190 is going to be tough to chase.

Dream11 fantasy team lineup prediction for Kings XI Punjab vs Royal Challengers Bangalore 6th Match match IPL 2020. After checking the latest players’ availability, which players will be part of both teams, he possible tactics that the two teams might use as we had leaned from previous seasons of Indian Premier League to make the best possible Dream11 team.