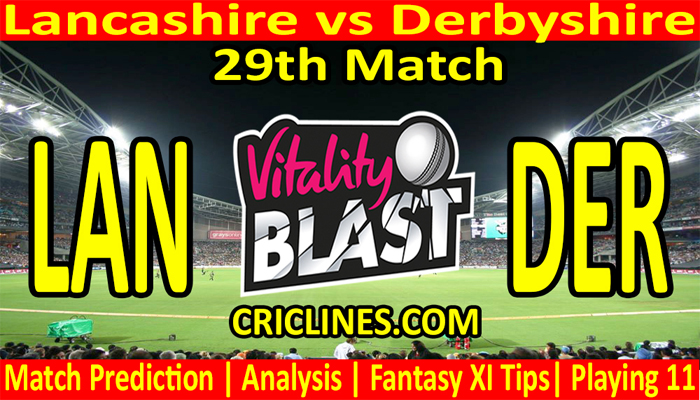 The world is ready to witness yet another big battle of Vitality T20 Blast. The 29th Match of Vitality T20 Blast 2022 is scheduled to play between Lancashire and Derbyshire on Wednesday, 1st June 2022 at Emirates Old Trafford, Manchester. We are posting safe, accurate, and 100 % secure today match prediction for all matches of T20 Blast free.

Lancashire had been good in the opening matches of the T20 Blast. They had played two matches with one win while their one match was tied. They are holding the third spot on the points table of the North Group. On the other side, Derbyshire also had played two matches but they had lost one match and had won one match. They are in the 7th position on the points table. We are in the early matches of the Vitality T20 Blast and the teams will take some time to get the momentum.

The opening match of Lancashire was tied but they won the second match against Worcestershire. They have a strong batting order in the side which is also in good form. Tim David had performed well recently in IPL 2022 and was also good in this match. He proved the highest run-scorer with 60 runs to his name on just 25 balls with the help of four boundaries and the same huge sixes. Keaton Jennings and Philip Salt are opening the batting inning for Lancashire and these are experienced batters and can provide a good opening start in the next matches. Dane Vilas, Steven Croft, and Liam Livingstone are handling the middle batting order of Lancashire.

Liam Livingstone is the other batter who was part of IPL 2022 and proved good as compared to the previous editions. Salt scored 29 runs while Liam Livingstone had 26 runs to his name in the previous match. The bowling department of Lancashire is also strong and experienced which is led by Richard Gleeson, Luke Wood, Tom Hartley, Matthew Parkinson, Liam Livingstone, and Danny Lamb. Richard Gleeson proved the most successful bowler in the most recent match with five wickets to his name in four overs against just 33 runs. Luke Wood and Matthew Parkinson picked one wicket each while Danny Lamb, Liam Livingstone, and Tom Hartley, were the bowlers who could not pick any wicket.

Derbyshire beat Leicestershire with a handsome margin of 70 runs after losing their first match against Warwickshire. The batting order of Derbyshire is led by Shan Masood and L Reece and both batters provided a good opening start. Harry Came, W Madsen, Brooke Guest, Leus du Plooy, and Hayden Kerr are available to handle the middle and lower batting order. Shan Masood was the highest run-scorer in the previous match with 53 runs to his name on 43 balls with the help of four boundaries. Leus du Plooy was the other batter who performed well with the bat and scored 38 runs while L Reece and Hayden Kerr scored 19 runs each.

We think that the batting order of Derbyshire is not strong enough and they should test some batters from the bench strength. Derbyshire won the previous match due to the outstanding performance of their bowling department. They defended the target of 160 runs and send the full team of Leicestershire back to the pavilion on a total of 89 runs in 15.3 overs. Hayden Kerr, Wayne Madsen, Mark Watt, Matt McKiernan, George Scrimshaw, and Samuel Conners are taking care of the bowling department of DER. Hayden Kerr was the most successful bowler in the previous match with two wickets to his name in 1.3 overs against just six runs. Matt McKiernan also picked two wickets while he was charged for 17 runs in three overs. Wayne Madsen, Mark Watt, George Scrimshaw, and Samuel Conners picked one wicket each. The bowling department of Derbyshire is performing well and we don’t think that they need to make any changes in the bowling squad for this match.

The 29th match of Vitality T20 Blast is going to be played at Emirates Old Trafford, Manchester. The pitch here at this stadium is expected to be flat and much favored for batting. It has a decent amount of pace and bounces in it. We may have some high-scoring matches here. The pitch may also have some help in it for the seamers.

The weather forecast for Manchester is good for a cricket match. There are some chances of rain during this match but we are hoping for a full match to see without any disturbance.

Check out the Dream11 fantasy prediction for the 29th Match of the finals day in Vitality T20 Blast, between Lancashire and Derbyshire.