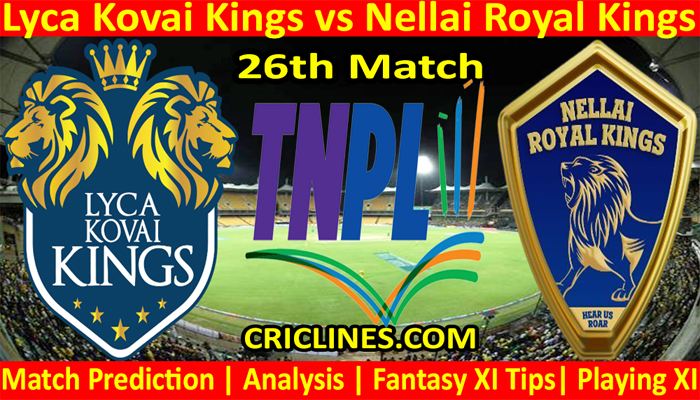 The cricket fans are ready to witness yet another big battle in the TNPL T20 League. The 26th match of Tamil Nadu Premier League 2022 is scheduled to play between Lyca Kovai Kings and Nellai Royal Kings on Saturday 23rd July 2022 at SCF Cricket Ground, Salem. We are posting safe, accurate, and secure today match prediction of TNPL.

Lyca Kovai Kings had won their previous match against IDream Tiruppur Tamizhans with a handsome margin of nine wickets. You sould remember that LKK had won three out of most recent four matches but they are going to face the team that had not lost any match in this tournamnet. They were not good in the first half of TNPL 2022 but they are coming back to good form at the right time. J Suresh Kumar is the leading run-scorer from the side of Lyca Kovai Kings who had scored 277 runs in the previus matches. He also had hit more fours and sixes than the other batter in TNPL 2022. We had seen that the batting order of Lyca Kovai Kings had been good in Tamil Nadu Premier League season seven. They were also good in the previous match against Chepauk Super Gillies where they scored a total of 170 runs in 20 overs. They had a poot start but the middle order of this team performed well.

The role of the skipper, Shahrukh Khan had been important in almost all previous matches. He was the most successful batter in the most recent match with 51 runs to his name on just 28 balls with the help of two boundaries and five huge sixes. Suresh Kumar was the other batter with some runs to his name. He scored 31 runs while Abhishek Tanwar smashed the inning of 28 runs on just 12 balls with the help of two boundaries and the same huge sixes. Sai Sudharsan scored 27 runs in the previous match. A Venkataraman is opening the batting inning with Suresh Kumar but he had totally failed in almost all matches. Lyca Kovai Kings lost the previous match due to the worst performance by their bowling department. They failed to defend a handsome target of 171 runs and leaked this target in 18.5 overs. N Selva Kumaran, Abhishek Tanwar, R Divakar, S Ajith Ram, Balu Surya, and Shahrukh Khan are handling the bowling department of LKK. Abhishek Tanwar proved the highest wicket-taker in the previous match picking three wickets in 3.5 overs against just 20 runs. S Ajith Ram and Balu Surya picked one wicket each while Shahrukh Khan, R Divakar, and N Selva Kumaran were the bowlers who failed to pick any wicket in the previous match.

Nellai Royal Kings are still the unbeaten team in Tamil Nadu Premier League after playing sixes matches. Nellai Royal Kings had been good in almost each and every department of the game. The batters of this team had performed well while the bowling department of NRK had also performed well till now. The bowling department of Nellai Royal Kings is very strong and experienced and they destroyed the batting order of IDream Tiruppur Tamizhans. They leaked 117 runs in 20 overs. Athisayaraj Davidson, K Easwaran, Sanjay Yadav, M Rooban Raj, Baba Aparajith, and NS Harish are the leading bowlers of NRK. K Easwaran was the most successful bowler in the previous match with three wickets to his name in three overs against just 11 runs. NS Harish was the other bowler who was just good with the ball. He picked two wickets in his four overs while he was charged for 24 runs.

Baba Aparajith, M Rooban Raj, and Sanjay Yadav picked one wicket each while Athisayaraj Davidson was the only bowler from the side of Nellai Royal Kings who could not manage to pick any wicket. The batting order of NRK is also doing well in this tournament. NS Harish and Laxmesha Suryaprakash are opening the batting inning for NRK with Baba Aparajith, Sanjay Yadav, Baba Indrajith, and G Ajitesh available to handle the middle and lower batting order. Baba Aparajith was the most successful batter in the previous match who scored 63 runs on 46 balls with the help of six boundaries and two huge sixes. Laxmesha Suryaprakash scored 28 runs while G Ajitesh remained not out after scoring 10 runs in the most recent match.

The toss is going to play an important role in the decision of all previously played matches of Tamil Nadu Premier League. We had seen in the previous editions of this tournament that chase is the best option for the both teams at the venue of Chennai. Almost 70% matches had been won by the bowling first. According to toss prediction, the team who will win the toss may choose to field first.

The 26th Match match of Tamil Nadu Premier League season 2022 is scheduled to be held at SCF Cricket Ground, Salem. The pitch here at this venue is flat and good for battting as there is no bounce and pace. Out-field on this venue is very fast and the ball will travel to the boundary very qualicky. It also have a lot of help for the spin bowlers vut almost all team in this tournament have a strong batting order so this does not matter. According to the live cricket score, a total of 180 runs should be a par score.

While we had a deep look at the squad, we think that Nellai Royal Kings is going to perform well in this match the TNPL T20 season 7 as they have a couple of players who can change the game. In this match, the batting department of the Nellai Royal Kings is much stronger as compared to the Lyca Kovai Kings. We also have reports from different sources for the win of the DDS.

We had provided you the above-mentioned today prediction on the basis of our research, understanding, and analysis. You can consider the point we had provided you and finally, the decision will be yours that you have to make.