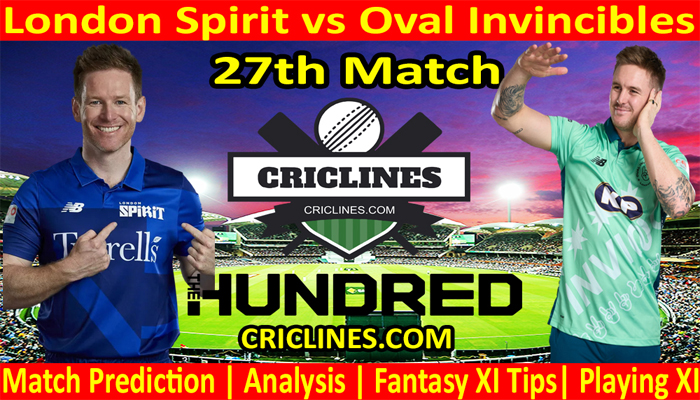 London Spirit had been just outstanding in this edition of The Hundred League. They are the best-performing team in this tournament right now. They had played six matches with five wins to their name. They had lost just one match and are leading the points table. On the other side, Oval Invincibles had performed average in this tournament. They had also played three matches with three wins and the same losses. They are situated at the fifth position on the points table.

The most recent win of London Spirit came against Welsh Fire with a margin of 17 runs. The performance of their batting order was good but not very impressive. They scored 156 runs in their inning of 100 balls. Lawrence was the most successful and highest run-scorer from their side who scored 43 runs on 26 balls with the help of one boundary and three huge sixes. Ben McDermott and A Rossington scored 32 runs each while Pollard remained not out after scoring 25 runs. He faced 17 balls and smashed two boundaries and one huge six during his inning. The skipper, Eoin Morgan failed to open the account on the scoreboard.

The bowling department of London Spirit also performed well and defended the target of 157 runs. They leaked 139 runs in their 100 balls inning. Daniel Lawrence was the most successful bowler from their side who picked four wickets in his 20 balls against just 20 runs. Chris Wood also picked four wickets while he was charged for 28 ruins in his 20 balls. Jordan Thompson picked one wicket while Liam Dawson, Nathan Ellis, and Mason Crane were the bowlers who failed to pick any wicket in the previous match.

Oval Invincibles had lost their most recent match against Birmingham Phoenix by the margin of 10 runs. Their bowling department failed to give the best performance in the previous match where they leaked 166 runs in their inning of 100 balls. M Milnes was the highest wicket-taker from their side who picked three wickets in 20 balls while he was charged for 32 runs. Sunil Narine picked two wickets while Mohammad Hasnain had one wicket to his name in 15 balls against 25 runs.

Sam Curran, Tom Curran, and Nathan Sowter were the bowlers who could not manage to pick any wicket. The performance of the batting order of Oval Invincibles was good but they could not chase the target of 167 runs and scored 156 runs in their 100 balls inning. Jordan Cox was the most successful and highest run-scorer from their side scoring 32 runs while Sam Curran and Tom Curran scored 30 runs each. Jason Roy was also good in the previous match with the bat and scored 21 runs.

London Spirit is full of experienced and young players of the t20 format. The batting order of this team is also strong and some well-known hitters of the t20 format are part of the squad of this team, so the winning chances of today’s match for the London Spirit have been increased. The equation of who will win today’s cricket match prediction and who will win the cricket match today is mentioned as under.

The 27th Match match of The Hundred League 2022 is going to be held at Lord’s, London. We had observed in the previous matches played here that the pitch here at this venue is good for batting. The track is slower than the others we have seen and helps the spinners quite a bit. We are hoping that the surface is bound to get slower and be a bit more difficult for batting in this match. A score of 185 is going to be tough to chase in this match.

Who Will Win London Spirit vs Oval Invincibles, 27th Match The Hundred League-2022