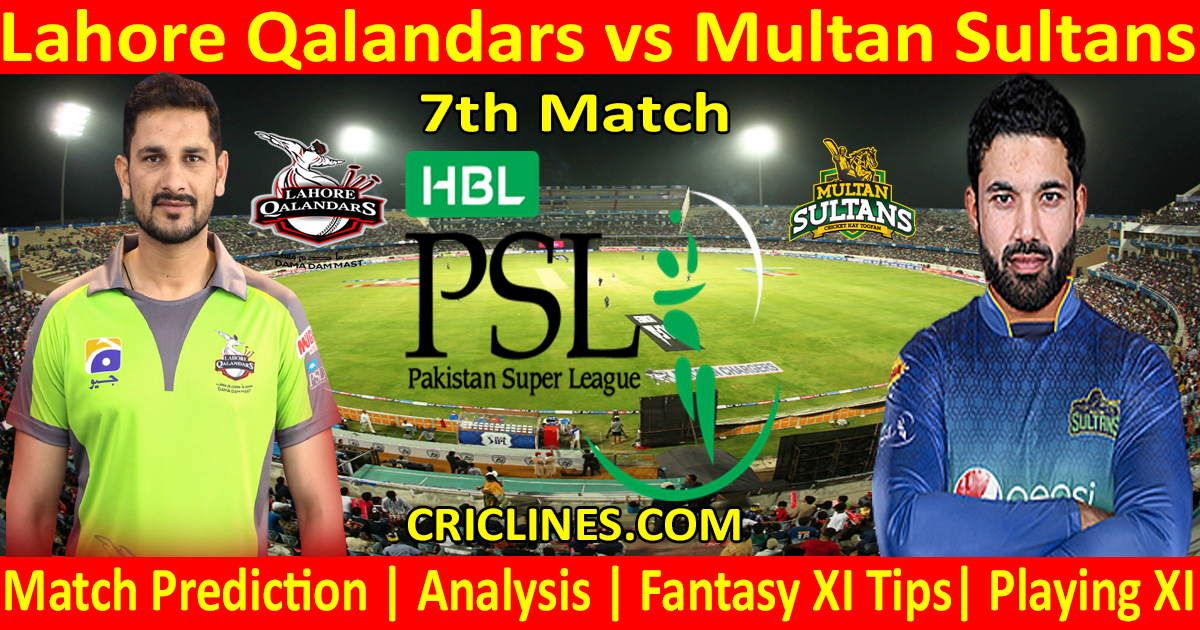 The cricket fans are ready to witness yet another big battle of PSL T20. The 7th Match of Pakistan Super League 2021 is scheduled to play between Lahore Qalandars and Multan Sultans on Friday, 26th February 2021 at National Stadium, Karachi. We are posting safe, accurate, and secure today match prediction for all matches of PSL free.

Back-to-back wins had put Lahore Qalandars on the top of the points table. After beating Peshawar Zalmi in their opening match, they had beaten the Quetta Gladiators in the 2nd match. The bowling department of Lahore Qalandars had performed well in both opening matches. Shaheen Afridi had succeeded to give an early breakthrough in both matches. Haris Rauf also gives his best performance and picked three wickets but he was charged for 38 runs in his four overs. Ahmed Daniyal is the other bowler who is performing for Lahore Qalandars. Hafeez was given two overs to bowl and he leaked just 11 runs but failed to pick any wicket. Rashid Khan had performed well in both matches but we are not sure that he will be available for selection as he has to go to his national duty. David Wiese was also tested in the second match by Qalandars and he performed well.

Lahore Qalandars had got their key batsmen back to the form. Fakhar Zaman was struggling to get his form back and he was also dropped by PCB for the tour of the home series against South Africa. He had got his form back and scored 82 runs on the strike rate of 150 plus. Mohammad Hafeez, who performed well in the recent edition of the T10 League, continued his good form and smashed an inning of 73 runs on just 33 deliveries with the help of five boundaries and six huge sixes. A good thing for Lahore Qalandars is that they had got their top-order batting line up back to the form.

Multan Sultans had lost both opening matches of season six of the Pakistan Super League even having some big totals on the board. The batting order of the Sultans had been good in the previous matches. The skipper, Mohammad Rizwan is in the best form of his life. He scored 71 runs in the first match and 41 runs in the second match against Zalmi. James Vince is the other batsman who had shown some power hitting in the previous match. Even having the batsmen like Chris Lynn, Sohaib Maqsood, Rilee Rossouw, Khushdil Shah, and Shahid Afridi, Multan had failed to put some points on the board. We think that this is not the fault of the batting, it is the bowling which was the reason that Sultans had lost both early matches.

The bowling unit of Multan Sultans had totally failed to perform well in both matches that they had played so far. They failed to defend a target of 194 runs which is a huge question mark on the performance of their bowling department. Sohail Tanvir was the reason for the loss in the first match and he also leaked plenty of runs in the second match. He was charged for 40 runs in his four overs bowled out and remained wicketless. Shahnawaz Dhani, who is the emerging player of the Sultans, performed well in his three overs and picked two wickets but he was smashed a lot of runs in his last over by Haidar Ali and Shoaib Malik. Usman Qadir gave a break throw to the Sultans but they failed to cash this opportunity. Shahid Afridi and Carlos Brathwaite also failed in the second match.

The 7th Match of Pakistan Super League season 2021 is scheduled to be held at National Stadium, Karachi. The pitch here at this venue is flat good for batting as there is no bounce and pace. Outfield on this venue is very fast and the ball will travel to the boundary very quickly. It also has a lot of help for the spin bowlers but almost all teams in this tournament have a strong batting order so this does not matter. According to the live cricket score, a total of 180 runs should be a par score.

While we had a deep look at the squad, we think that Lahore Qalandars is going to perform well in this season of the PSL T20 as they have a couple of players who can change the game. In this match, the batting and bowling department of the Sultans is much stronger as compared to the United. We also have reports from different sources for the win of the Sultans.