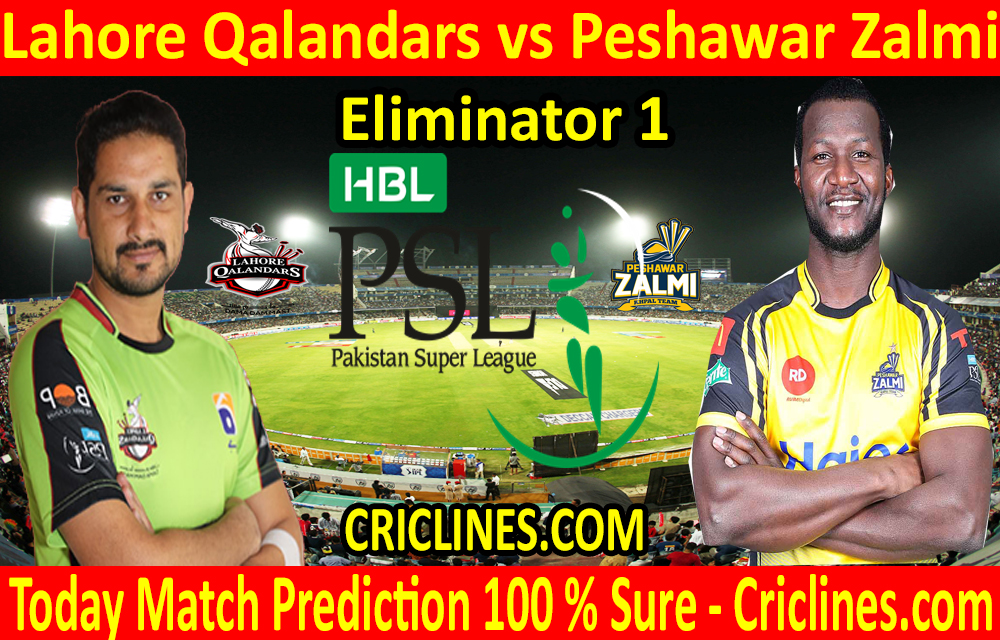 The world is ready to witness yet another big battle of PSL T20. The Eliminator 1 match of Pakistan Super League 2020 is scheduled to play between Peshawar Zalmi and Lahore Qalandars on Saturday, 14th November 2020 at National Stadium, Karachi. We are posting safe, accurate, and secure today match prediction for all matches of PSL free.

Lahore Qalandars had qualified for the playoff of Pakistan Super League for the first time in their history of five years. The performance of this team had been average in this tournament. They played a total of 10 matches with five wins to their name. They lost five matches and are holding the 3rd position on the points table. They won their last league stage match against Multan Sultans with a handsome margin of nine wickets. They won the toss and decided to field first. Their bowling unit failed to give the best performance in that match. They leaked 184 runs in their inning of 20 overs. Shaheen Afridi was the only successful bowler from their side who picked two wickets in his two overs bowled out while he was charged for 23 runs. David Wiese also had a good performance with the ball. He picked two wickets in his four overs bowled against 24 runs.

Mohammad Hafeez picked one wicket in his four overs bowled out while he leaked 22 runs. Dilbar Hussain, Samit Patel, Haris Rauf, and Raja Farzan were the bowlers who failed to pick any wicket in the previous match. The way how the batting order of Lahore Qalandars performed in the previous match was just outstanding. They chase the target of 185 runs in just 18.5 overs with nine wickets in hand. Chris Lynn was the most successful and highest run-scorer from their side who scored 113(55) runs with the help of 12 boundaries and eight huge sixes. He also remained not out till the chase of the target. Fakhar Zaman also had a superb performance with the bat. He scored 57(35) runs and smashed seven boundaries and two sixes. The skipper, Sohail Akhtar remained not out after scoring 19 runs.

Peshawar Zalmi had failed to give their best performance in this season of the Indian Premier League but they qualified for the playoffs. Their performance was not impressive in this tournament. Like all other teams, they also played a total of 10 matches at the league stage with just four wins to their name. They lost five matches while their one match was ended with no result. They are holding the 4th position on the points table after the end of league stage matches. They were beaten by Multan Sultans in their most recent match by the margin of three runs. They won the toss and decided to field first. The performance of their bowling unit was good in that match. They leaked 154 runs in their inning of 20 overs. Rahat Ali was the most successful and highest wicket-taker from their side who picked three wickets in his four overs bowled out while he was charged for 24 runs.

Hasan Ali, Aamir Khan, and the skipper, Wahab Riaz picked one wicket each while Shoaib Malik and Hammad Azam were the bowlers who failed to pick any wicket. Peshawar Zalmi lost the previous match due to the worst performance by their batting order. They failed to chase the target of 155 runs and could manage to score 151 runs in their inning of 20 overs. Imam-ul-Haq was the only successful bowler from their side who scored 56(41) runs with the help of four boundaries and two sixes. Shoaib Malik also had a good performance with the bat. He scored 30 runs while Umar Amin had 29 runs to his name. Hasan Ali and Haidar Ali could manage to score one run each while Kamran Akmal had two runs to his name.

The toss had played a key role in the decision of all matches of the Pakistan Super League. We had seen in the previous matches that chase is the best option for both teams. According to our toss prediction, the team who will win the toss may choose to bat first.

The Eliminator 1 of Pakistan Super League season 2020 is scheduled to be held at National Stadium, Karachi. The pitch here at this venue is good for batting. It also has a lot of help for the spin bowlers. A total of 190 runs should be a par score.