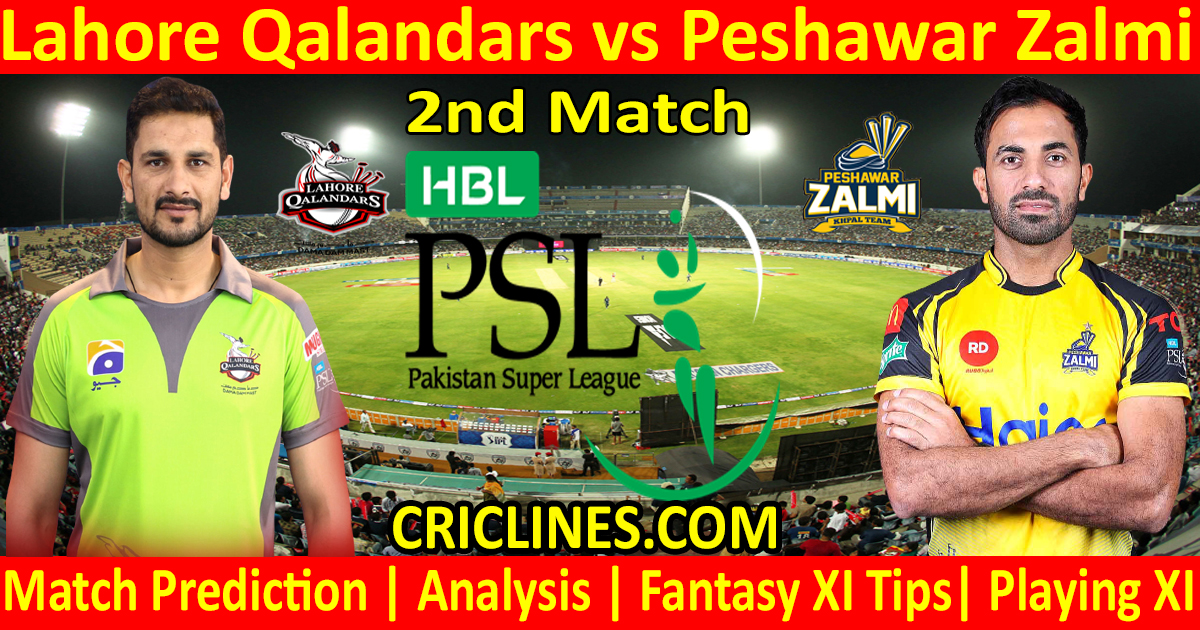 The world is ready to witness yet another big battle of PSL T20. The 2nd Match of Pakistan Super League 2021 is scheduled to play between Lahore Qalandars and Peshawar Zalmi on Sunday, 21st February 2021 at National Stadium, Karachi. We are posting safe, accurate, and secure today match prediction for all matches of PSL free.

Lahore Qalandars broke the history of laying at the bottom of the points table in the previous season of the Pakistan Super League and ended the last edition as a runner-up team. Lahore Qalandars had picked the best set of batting and bowling from the auctions. We can say that Lahore Qalandar is very rich when it comes to the bowling department. Dilbar Hussain, Haris Rauf, and Shaheen Shah Afridi are going to lead the bowling unit of the Qalandars. One of the strongest picks for the Qalandars was Rashid Khan who is going to play in the PSL T20 for the first time. We know how Rashid Khan can perform in the t20 format of cricket. He does not leak many runs and also knowns as a wicket-taker bowler. He had given his best performance in the recent season of the Big Bash League.

Lahore Qalandars have many choices for the fifth bowlers. They can pick one from Samit Patel, Mohammad Hafeez, and David Wiese. Like bowling, Lahore Qalandars are also rich when it comes to the batting department. Mohammad Hafeez was dropped from the national squad for the South Africa tour and now, he had to prove the selectors wrong by giving the best performance. Fakhar Zaman will also get noticed as he is not playing international cricket for a long time. He had to work hard and had to take his place back as the opening batsman of the national team of Pakistan. Joe Denly and Sohail Akhtar will be leading the batting order of Qalandars. The skipper, Sohail Akhtar had given his best performance in the recent season of the T10 League and he is in tremendous form which can be beneficial for the Qalandars. Lahore Qalandars also have some best all-rounders which is a plus point for this team.

Peshawar Zalmi is one of the most successful teams of Pakistan Super League but their performance was not impressive in the previous edition. They were laying at the 4th position on the points table after the end of the league stage matches and were beaten by the Lahore Qalandars in the eliminator one match. The squad of Zalmi is well-balanced for this season of PSL T20. Wahab Riaz is going to lead the bowling unit of this team. We know that Wahab Riaz leaks many runs but he is also a wicket taker bowler. Mujeeb ur Rahman and Mohammad Irfan are the other bowlers for the Zalmi. Mujeeb ur Rahman has a decent record while bowling in power-play overs but we don’t think that he is going to be successful against the strong batting order of Lahore Qalandars.

The all-rounding squad of Peshawar Zalmi is well known and experienced. Shoaib Malik, Ravi Bopara, Amad Butt are the best addition for Zalmi in the middle overs. The batting order of Peshwar Zalmi looks much stronger as compared to Lahore Qalandars at least on papers. David Miller is going to lead the batting order of Peshawar Zalmi with the opening batsman of the national team of Pakistan Haidar Ali. David Miller had given his best performance against Pakistan recently on the same venue and he knows the behavior of the pitch very well. A lot of giants batsmen of t20 cricket like Faf du Plessis, Ravi Bopara, Shoaib Malik, Kamran Akmal, Imam ul Haq, and Sherfane Rutherford create the difference between Peshwar Zalmi and other teams. Kamran Akmal had a decent record while playing the PSL while Haidar Ali is known as a hard-hitter which is a great advantage for the Zalmi.

Lahore Qalandars is overall a strong team as compared to the Peshawar Zalmi especially when it comes to bowling. The batting and bowling squad of the Kings is strong at least on papers, so the winning chances of today match for Lahore Qalandars have been increased. The equation of winning chances of both teams for today match is mentioned as under.

The toss is going to play a key role in the decision of all matches of the Pakistan Super League. We had seen in the previous editions of this tournament that chase is the best option for both teams. According to our toss prediction, the team who will win the toss may choose to field first.

The 2nd match of Pakistan Super League season 2021 is scheduled to be held at National Stadium, Karachi. The pitch here at this venue is flat good for batting. Outfield on this venue is very fast and the ball will travel to the boundary very quickly. It also has a lot of help for the spin bowlers but almost all team in this tournament have a strong batting order so this does not matter. According to the live cricket score, a total of 180 runs should be a par score.

Lahore Qalandars will be a favorite team at the opening of this match. We will have to wait till the toss. If Peshawar Zalmi wins too, they will surely elect to field first. We will go with the Peshwar Zalmi. You should connected with us on our telegram channel where we will give you tips during the match.