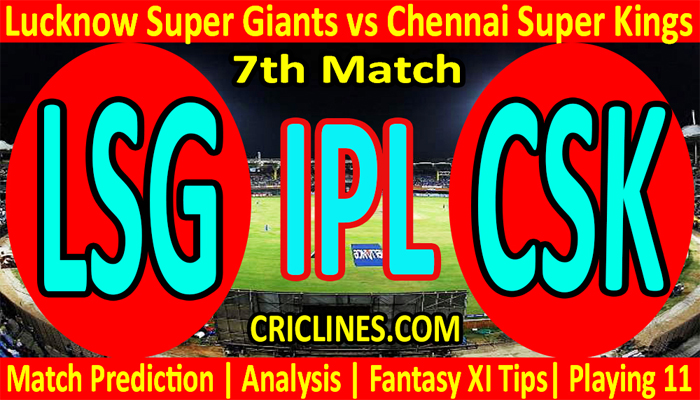 The cricket fans are ready to witness yet another big battle of the IPL 2022. The 7th match of the Indian Premier League 2022 is scheduled to play between Lucknow Super Giants and Chennai Super Kings on Thursday, 31st March 2022 at Brabourne Stadium, Mumbai. We are posting safe, accurate, and 100% secure today match prediction for all matches of IPL T20 free.

Almost all teams of IPL had played at least one match. Lucknow Super Giants picked some best and most experienced players from IPL 2022 auctions but failed to have a kick start to this one of the biggest cricket leagues in the world. They lost their first match against Gujarat Titans. The defending champions changed their squad for this tournament and even at the last moment, they also changed their captain. They lost their opening match against KKR.

Lucknow Super Giants are the newest edition in the family of IPL. They had picked experienced team management and also the best and experienced players of T20 cricket from all over the world in IPL auctions 2022 but can’t have a winning start. There is no doubt that the batting order of LSG is strong but they failed to give the performance many of us were expecting. They lost their four key batters on a total of just 29 runs. KL Rahul, Quinton de Kock, Evin Lewis, and Manish Pandey are the key batters of Lucknow but they totally failed. We saw some good batting by the lower batting order of LSG who put a defendable total on the board.

Deepak Hooda and Ayush Badoni had a partnership of 87 runs for the fifth wicket and both batters scored the fifties. Deepak Hooda scored 55 while Ayush Badoni had 54 runs to his name. The bowling unit of Lucknow Super Giants performed well but they failed to defend a low total on a batting favored pitch. Dushmantha Chameera proved the most successful bowler who picked two wickets in his three overs bowled out against just 22 runs. Avesh Khan picked one wicket but he leaked plenty of runs. He was charged for 33 runs in 3.4 overs bowled out. Krunal Pandya and Deepak Hooda picked one wicket each while Mohsin Khan and Ravi Bishnoi failed to pick any wicket.

Defending champions, Chennai Super Kings were beaten by the runner-up team of the previous edition of IPL, Kolkata Knight Riders in the opening match of IPL 2022. CSK had made some major changes in their squad for IPL 2022 and had picked some best batters like Devon Conway, Robin Uthappa, and Ruturaj Gaikwad but these all batters failed to put a big total on the board. They scored 131 runs in their 20 overs. The legend of CSK, MS Dhoni was the highest run-scorer who remained not out after scoring 50 runs. He faced 38 balls and smashed seven boundaries and one huge six during his inning.

Robin Uthappa scored 28 runs while the new skipper of Chennai, Ravindra Jadeja could manage to score 26 runs. The bowling unit of Chennai Super Kings is also strong and experienced and they also performed well in the previous match but failed to defend a low target on the board. They leaked the target of 132 runs in 18.3 overs. Dwayne Bravo was the most successful and highest wicket-taker from the side of CSK who picked three wickets in his four overs bowled out against just 20 runs. Mitchell Santner picked one wicket. There is an interesting point that the two legends of team India Virat Kohli and MS Dhoni had left the captaincy of their teams but their performances had been improved individually.

This will be the first match ever which is going to be held between Lucknow and Chennai.

Lucknow Super Giants had played just one match in the history of IPL which they had lost while Chennai Super Kings had won three out of five recently played matches.

Chennai is overall a strong team when we compare it with Lucknow Super Giants. They have the best players in the t20 format of cricket. The batting order of this team is also strong and some well-known hitters of the t20 format are part of the squad of this team, so the winning chances of today’s match for Chennai Super Kings have been increased. The equation of who will win today’s cricket match prediction and who will win the cricket match today is mentioned as under.

The 7th match of IPL T20, 2022 is going to be held at the Brabourne Stadium, Mumbai. We had observed in the previous matches played here that the pitch here at this venue is good for batting in early overs. We had seen a total score of near about 400 runs in the first match of this tournament. The track has a good amount of pace and bounce which allows the batsmen for good cricketing shorts but this ground also has big boundaries which can be a plus point for the bowlers. A score of 180 plus seems to be a par score.

MS Dhoni, Dwayne Bravo, and Rahul Tewatia are the key players to watch in this match.

Dream11 fantasy team lineup prediction for Lucknow Super Giants vs Chennai Super Kings 7th Match IPL 2022. After checking the latest player’s availability, which players will be part of both teams, the possible tactics that the two teams might use as we had learned from previous seasons of Indian Premier League to make the best possible Dream11 team.