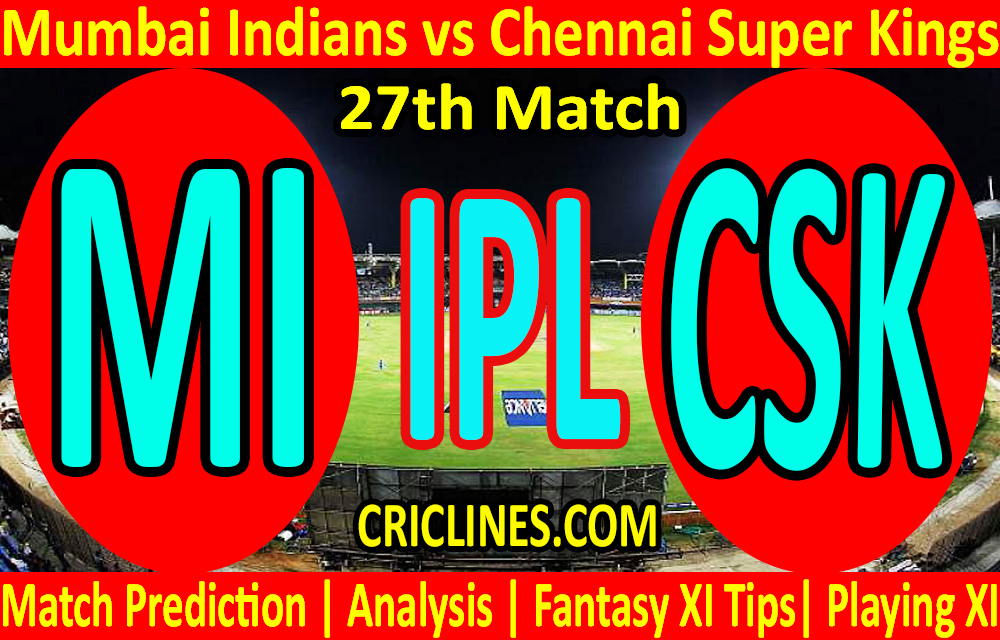 The cricket fans are ready to witness yet another big battle of the IPL T20. The 27th Match of the Indian Premier League is scheduled to play between Mumbai Indians and Chennai Super Kings on Saturday, 1st May 2021 at Arun Jaitley Stadium, Delhi. We are posting safe, accurate, and 100% secure today match prediction for all matches of IPL T20 free.

Mumbai Indians had faced some issues in the early stage of this tournament. They had won just three out of six matches played so far and are holding the 4th position on the table. Now they are going to face Chennai Super Kings who is the second most successful team of all seasons of IPL. It had been interesting to see both teams in the competition and this match also decided the most powerful contenders for the title of IPL 2021. Mumbai Indians dropped Ishan Kishan in the previous match against Rajasthan Royals and gave a chance to Nathan Coulter Nile but he failed to pick any wicket in the match. Jasprit Bumrah and Trent Boult are leading the bowling department of this team in almost all matches they had played. These both are the bowlers who make a big difference between other teams. Rahul Chahar had been outstanding in this tournament and is one of the leading taking takers and also had been the economical bowler. The form of Krunal Pandya had been average.

The batting order of Mumbai Indians had been good in the last couple of matches. Krunal Pandya was promoted up to the order in batting and he proved this decision good. Quinton de Kock was struggling in some previous matches but he came back strongly and scored 70 runs in the previous match against Rajasthan Royals with a strike rate of 144. He smashed six boundaries and two sixes during his inning. He is the one who had played for Delhi and will be well known with the conditions of Delhi. He can play a key role in this match for Mumbai Indians in this match. No one can doubt that Rohit Sharma is a well good batsman when it comes to t20 cricket but he had not performed as many of us were hoping. Suryakumar Yadav is the other batsman who had failed to convert his good start to a good total. Whenever he sets up on the crease, he gets out. We think that Suryakumar Yadav and Rohit Sharma had to improve their showing for the team. Pandya brothers and Kieron Pollard are available to handle the middle batting order but we think that they need a proper batsman in the middle order.

Chennai Super Kings are in the best form and are winning matches consistently. They had won five out of six matches played so far and are leading the points table when we are writing this. The form of the batting order of Chennai Super Kings is tremendous nowadays and they are aggressive in batting. Ruturaj Gaikwad scored some runs in the most recent match against Sunrisers Hyderabad and will be confident. Faf du Plessis is scoring runs in almost all matches he had played. He scored 56 runs in the previous match with a strike rate of 144 with the help of six boundaries. Moeen Ali is batting at the third position and also had shown some power hitting as well. Ravindra Jadeja had cemented his place at number five as a batsman but had not found a good partner at the other end. He is the best power hitter on the ball and had scored runs at the highest strike rate. The form of MS Dhoni and Suresh Raina had not been consistent. We think that this team can face a lot of trouble if they lose two wickets early.

The bowling department of Chennai Super Kings had performed well in the previously played matches but we think that they are going to struggle in this match. Deepak Chahar had performed well with the new ball but we had seen that when the ball stops swinging, he had leaked plenty of runs. The same situation applies to Sam Curran. He had been good with the new ball and also had picked wickets but once the ball gets old, he had leaked runs. Both bowlers need to pick a couple of early wickets of Mumbai Indians to restricted them on a low total. Shardul Thakur is the other bowler who had leaked runs in the middle overs. We think that he needs to improve his skills if he gets a chance in the final playing eleven. Moeen Ali, Lungi Ngidi, and Ravindra Jadeja are also available to bowl in the middle overs but they are not who can stop the batting order of Mumbai Indians from run scoring. We think that Imran Tahir much gets a chance in the final playing eleven for this match.

Mumbai Indians had won four out of five most recent matches played while Chennai Super Kings had won five out of five recently played matches.

Mumbai Indians is overall a strong team than Chennai Super Kings. They have the best players in the t20 format. The batting order of this team is also strong and some well-known hitter of t20 format is part of the squad of this team, so the winning chances of today match for Mumbai Indians have been increased. The equation of who will win today cricket match prediction and who will win the cricket match today is mentioned as under.

The 27th Match of IPL T20, 2021 is going to be held at the Arun Jaitley Stadium, Delhi. We had observed in the previous matches played here that the pitch here at this venue is good for batting in early overs. The track has a good amount of pace and bounce which allows the batsmen for the good cricketing shorts but this ground also has big boundaries which can be a plus point for the bowlers. A score of 190 plus seems to be a par score.

Dream11 fantasy team lineup prediction for Mumbai Indians vs Chennai Super Kings 27th Match IPL 2021. After checking the latest player’s availability, which players will be part of both teams, the possible tactics that the two teams might use as we had learned from previous seasons of the Indian Premier League to make the best possible Dream11 team.