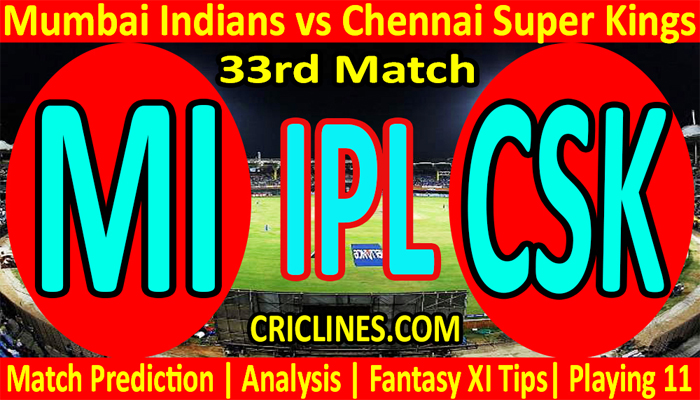 The world is ready to witness yet another big battle of the IPL 2022. The 33rd match of the Indian Premier League 2022 is scheduled to play between Mumbai Indians and Chennai Super Kings on Thursday, 21st April 2022 at Dr. DY Patil Sports Academy, Mumbai. We are posting safe, accurate, and 100% secure today match prediction of IPL T20 2022.

Mumbai is five times the title winner of IPL and this had happened for the first time in the history of IPL that they had lost six matches in a row. There are many reasons behind this. The key reason is that they did not pick a good combination of batting and bowling in the IPL 2022 auctions. The batting and bowling departments of MI had totally failed to give the best performance in IPL 2022. The most recent loss of Mumbai came against Lucknow Super Giants. On the other hand, CSK is the other team that had totally failed to perform well in IPL 2022. They are the second-worst performing team right now. They had just one out of six matches they had played. They had lost five matches and are laying at the second position from the bottom of the points table. This match is going to be very interesting as both teams failed to perform in IPL 2022. In IPL prediction, we don’t think that MI will register its first win in IPL 2022.

MI had been struggling with their batting and bowling departments in IPL 2022. The new bowling squad of MI had totally failed and we think that they must test their bench strength before it is too late. Tilak Varma and Jaydev Unadkat are leading the bowling department with M Ashwin, Jasprit Bumrah, and Tymal Mills while they are using Fabian Allen as the sixth bowling option. Tilak Varma bowled out just one over in the previous match. They leaked 199 runs in 20 overs. Unadkat was the only successful bowler with two wickets to his name in four overs against 32 runs. M Ashwin picked one wicket in four overs against 33 runs. Fabian Allen also picked one wicket but he leaked a lot of runs. He was charged for 46 runs in four overs. Tilak Varma, Jasprit Bumrah, and Tymal Mills were the bowlers who failed to pick any wicket in the previous match against LSG. Tymal Mills was charged for 54 runs in just three overs.

The batting order of Mumbai had not been good in IPL 2022 but they performed well in the previous match against Lucknow even though they could not chase the target of 200 runs. They scored 181 runs in 20 overs. Ishan Kishan and Rohit Sharma are opening the batting inning for Mumbai but they had not provided a good opening start. Dewald Brevis, Suryakumar Yadav, Tilak Varma, Kieron Pollard, and Fabian Allen are handling the top and middle batting order of Mumbai. Suryakumar Yadav was the most successful batter with 37 runs to his name. He faced 27 balls and smashed three boundaries during his inning. Dewald Brevis was the other batter from the side of MI who smashed the inning of 31 runs on just 13 balls with the help of six boundaries and one huge six. Tilak Varma scored 26 runs while Kieron Pollard had 25 runs to his name. He smashed two sixes and one boundary during his inning. We think that MI is seeking a solution for the middle batting order and bowling department. They will test some new players from their bench strength.

CSK lost the previous match against Gujarat after registering their very first win over RCB. The key problem of Chennai had been the batting order. They had not scored a defendable total in any match of IPL 2022 except for their match against RCB. We are not saying that the batting order of CSK is weak. They have the batters like Ruturaj Gaikwad, Robin Uthappa, Moeen Ali, Ambati Rayudum, Shivam Dube, and even Ravindra Jadeja. They don’t need to change their final playing eleven but need to use the players in a good way. They scored 169 runs in 20 overs in the previous match against GT. Ruturaj Gaikwad was the most successful batter from their side who scored 73 runs on just 48 balls with the help of five boundaries and the same huge sixes. Rayudu was the other batter who put some runs on the board. He scored 46 runs on 31 balls and smashed four boundaries and two huge sixes. Ravindra Jadeja remained not out after scoring 22 runs while Shivam Dube had 19 runs to his name.

Robin Uthappa and Moeen Ali totally failed in the previous match. The bowling department of CSK also failed to give the performance many of us were expecting. Chennai had lost too many matches in IPL 2022 and the key reason is the worst performance of their bowling department. We think that they need to make some changes in the bowling department for this match. Mukesh Choudhary, Chris Jordan, Mahesh Theekshana, Dwayne Bravo, Moeen Ali, and Ravindra Jadeja are taking care of the bowling department of CSK. Dwayne Bravo was the most successful bowler with three wickets to his name in four overs against 23 runs. Mahesh Theekshana also performed well with the ball and picked two wickets in his four overs bowled out against just 24 runs. Mukesh Choudhary and Ravindra Jadeja picked one wicket each Chris Jordan and Moeen Ali were the bowlers who failed to pick any wicket. Will the management of CSK make some changes in the bowling department for this match? the time will tell us.

MI had faced Chennai in 34 matches where they had won 20 matches while Chennai had won 14 matches.

Mumbai Indians had not won any match out of the most recent five matches they had played while Chennai Super Kings had won just one out of five recently played matches.

Mumbai Indians is overall a strong team when we compare with Chennai Super Kings. They have the best players in the t20 format of cricket. The batting order of this team is also strong and some well-known hitters of the t20 format are part of the squad of this team, so the winning chances of today’s match for Mumbai Indians have been increased. The equation of who will win today’s cricket match prediction and who will win the cricket match today is mentioned as under.

The 33rd match of IPL T20, 2022 is going to be held at the Dr. DY Patil Sports Academy, Mumbai. We had observed in the previous matches played here that the pitch here at this venue is good for batting in early overs. The track has a good amount of pace and bounce which allows the batsmen to the good cricketing shorts but this ground also have big boundaries which can be a plus point for the bowlers. A score of 190 plus seems to be a par score.

Dwayne Bravo, Ishan Kishan, and Rayudu are the key players to watch in this match.

Dream11 fantasy team lineup prediction for Mumbai Indians vs Chennai Super Kings 33rd Match IPL 2022. After checking the latest player’s availability, which players will be part of both teams, the possible tactics that the two teams might use as we had learned from previous seasons of the Indian Premier League to make the best possible Dream11 team.

We had provided you with the above-mentioned today’s prediction on the basis of our research, understanding, and analysis. These prediction tips have also based on the reports which we have from our different sources. You can consider the point we had provided you and the final decision will be yours.