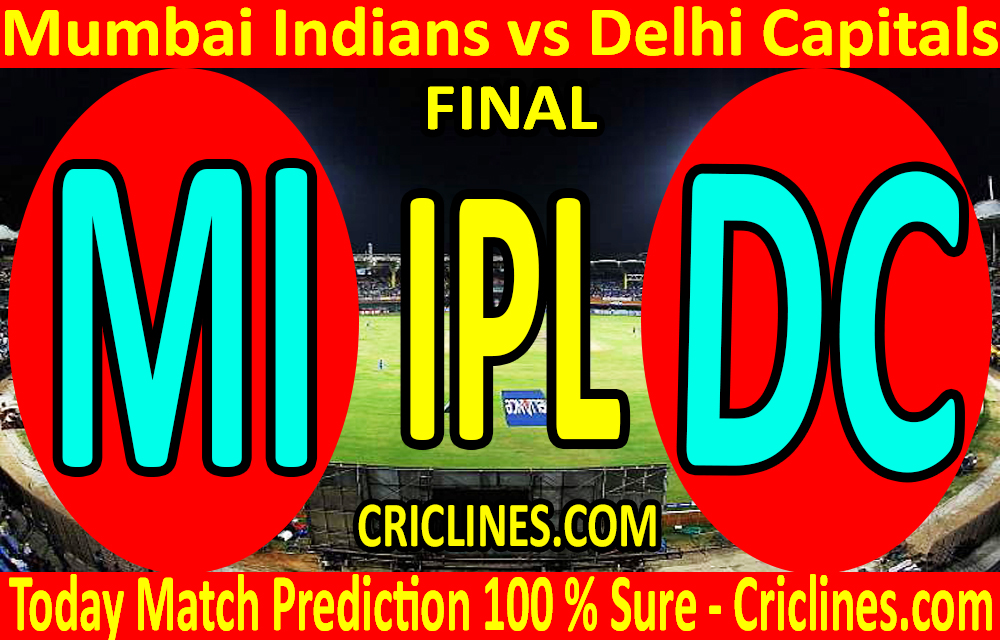 The cricket fans are ready to witness yet another big battle of the Indian Premier League. The Final of Dream11 IPL T20 is scheduled to play between Mumbai Indians and Delhi Capitals on Tuesday, 10th November 2020 at Dubai International Cricket Stadium, Dubai. We are posting safe, accurate, and 100% secure today match prediction for all matches of IPL T20 free.

The defending champions, Mumbai Indians are in a strong position to defend their title. They were the best team at the league stage and also had won the most of their played matches. They won nine of 14 matches at the league stage. They beat DC in the first qualifier match with a handsome margin of 57 runs. They lost the toss and were asked to bat first. The way how their batting order performed in that match was just outstanding. They scored a total of 200 runs in their inning of 20 overs. Ishan Kishan was the most successful and highest run-scorer from their side who scored 55(30) and smashed four boundaries and three huge sixes. He remained not out till the end of the inning. Suryakumar Yadav also had an outstanding performance with the bat. He scored 51(38) with the help of six boundaries and two sixes. de Kock also had a superb performance with the bat. He scored 40(25) and smashed five boundaries and one six. Hardik Pandya remained not out after scoring 37(14) with the help of six huge sixes. Pollard and the skipper, Rohit Sharma failed to open the account on the scoreboard.

Like the batting, the bowling unit of Mumbai Indians also performed well in the previous match. They defended the target of 201 runs and leaked 143 runs in their inning of 20 overs. Jasprit Bumrah was the most successful and highest wicket-taker from their side who picked four wickets in his four overs bowled out while he was charged for just 14 runs. Trent Boult also had a good performance with the ball. He picked two wickets in his two overs bowled out against nine runs. Krunal Pandya and Kieron Pollard picked one wicket each in the previous match. Rahul Chahar and Nathan Coulter-Nile were the bowlers who failed to pick any wicket in the previous match.

Delhi Capitals is the second-best performing team of this season of the Indian Premier League. They won eight out of 14 matches at the league stage and ended at the second position on the points table after the end of league stage matches. They failed to avail the first chance to qualify for the final as they were beaten by Mumbai Indians in Qualifier 1 but availed to a second chance. They won the eliminator match against Sunrisers Hyderabad with a margin of 17 runs. They won the toss and decided to bat first. The performance of their batting order was impressive in that match. They scored a total of 189 runs in their inning of 20 overs. Almost all batsmen from their side put some runs on the board. Shikhar Dhawan was the most successful and highest run-scorer from their side who scored 78(50) runs with the help of six boundaries and two sixes. Shimron Hetmyer also had an outstanding performance with the bat. He remained not out after scoring 42(22) with the help of four boundaries and one six. He remained not out till the end of the inning.

Marcus Stoinis also had an outstanding performance with the bat. He scored 38(27) runs and smashed five boundaries and one six. The skipper, Shreyas Iyer could manage to score 21 runs. The bowling unit of Delhi Capitals failed to give their best performance in the previous match but they defended the target of 190 runs. They leaked 172 runs in their inning of 20 overs. Almost all bowlers from their side performed well in the previous match. Kagiso Rabada was the most successful and highest wicket-taker from their side who picked four wickets in his four overs bowled out against 29 runs. Marcus Stoinis also had a good performance with the ball. He picked three wickets in his three overs bowled out against 26 runs. Axar Patel picked one wicket while Ravichandran Ashwin, Anrich Nortje, and Praveen Dubey were the bowlers who failed to pick any wicket.

Mumbai Indians had performed well in the most recent matches and are in good form. This is also overall a strong team as compared to the Delhi Capitals at least on papers and also had performed well in this tournament so far. According to our IPL prediction, Mumbai Indians are the favorite team that will win this match. There are many factors that make Mumbai Indians a favorite team to win this match. Some of the key factors are mentioned as under:

The Final of the Indian Premier League is going to be held at the Dubai International Cricket Stadium, Dubai. We had observed in the previous matches played here that the pitch here at this venue is good for batting. The track is slower than the others we have seen and helps the spinners quite a bit. We are hoping that the surface is bound to get slower and be a bit more difficult for batting in this match. A score of 185 is going to be tough to chase.

Dream11 fantasy team lineup prediction for Mumbai Indians vs Delhi Capitals Final IPL 2020. After checking the latest players’ availability, which players will be part of both teams, he possible tactics that the two teams might use as we had leaned from previous seasons of Indian Premier League to make the best possible Dream11 team.