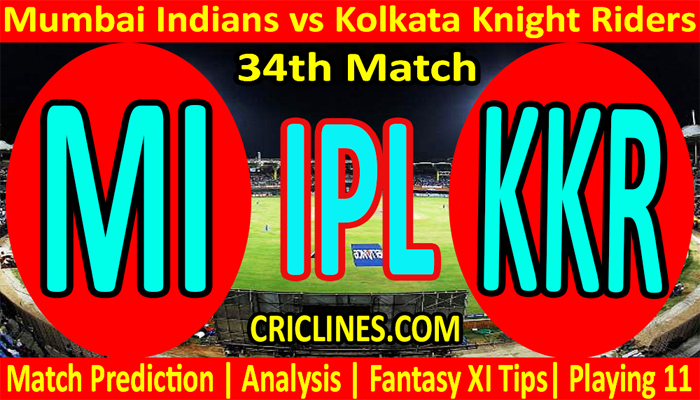 The cricket fans are ready to witness yet another big battle of the IPL T20. The 34th Match of the Indian Premier League is scheduled to play between Mumbai Indians and Kolkata Knight Riders on Thursday, 23rd September 2021 at Sheikh Zayed Stadium, Abu Dhabi. We are posting safe, accurate, and 100% secure today match prediction for all matches of IPL T20 free.

Mumbai Indians have a history of losing the first match of IPL when we have a look at the records of previous editions of this tournament. They lost the 1st match against CSK right after resuming of IPL 2021. They are situated at the 4th spot on the table. Kolkata Knight Riders had a kick start to the second half of IPL and had beaten the favorite team, Royal Challengers Bangalore in their most recent match. After this win, they had moved to the 6th position on the points table.

Mumbai Indians are known as slow starters and best finishers. We know that Mumbai Indians are a team who can bounce back strongly at any stage of IPL as they have a lot of positive things but they also have some negative things which they have to recover. They leaked plenty of runs in the middle overs of their inning in the previous match against CSK. We are expecting some key changes in their final play 11 squads for this match. Rohit Sharma was missing from the previous match and we are sure that he will lead this team in this match and will open the batting inning with Quinton de Kock but we are not sure about the presence of Hardik Pandya in this match. Krunal Pandya will miss this match is Hardik Pandya may be a part of this match.

Mumbai Indians have a settled bowling department as we observed in the previous match against CSK where they picked four early wickets on a total of just 24 runs. Adam Milne was the best bowler from their side in the previous match who picked two wickets in his four overs against just 21 runs. Rahul Chahar was the other bowler who was the most economical even he failed to pick any wicket. Jasprit Bumrah and Trent Boult picked two wickets each while Krunal Pandya and Kieron Pollard were the bowlers who failed to pick any wicket. Mumbai Indians were struggling in the previous match against CSK to fill the place of 5th bowler and they can use Hardik Pandya in this match if he gets a chance in the final playing 11 in this match.

Kolkata Knight Riders had a kick start to the second half of IPL but many of us were not expecting it. They are situated in 6th place and another win in this match can move them to the top four. We saw a different approach by KKR as they were in the first half. They adapted the attacking strategy and we saw the result. Shubhman Gill was batting aggressively and was playing fear-less cricket. The debutant, Venkatesh Iyer also batted well like an experienced batsman. Another interesting thing we observed is that KKR send Andre Russell to bat at number three. It is the sign that they will promote Andre Russell in the next matches to up order.

The performance of the bowing department of Kolkata Knight Riders was just outstanding. They send all teams of RCB which has a strong batting order under the hundred runs. Almost all bowlers from their side like Prasidh Krishna, Lokie Ferguson, Sunil Narine, Varun Chakravarthy, and Andre Russell performed well. Andre Russell picked three wickets in his three overs bowled out against just nine runs. Varun Chakravarthy also performed well in the previous match and picked three wickets in his four overs bowed out while he was charged for 14 runs. Lockie Ferguson picked two wickets while Prasidh Krishna had one wicket to his name. Rahul Tripathi and Nitish Rana can also use in this match as bowlers.

Mumbai Indians is overall a strong team than Mumbai Indians. They have the best players of the t20 format. The batting order of this team is also strong and some well-known hitters of the t20 format is part of the squad of this team, so the winning chances of today’s match for Mumbai Indians have been increased. The equation of who will win today’s cricket match prediction and who will win the cricket match today is mentioned as under.

The 34th Match of IPL T20, 2021 is going to be held at the Sheikh Zayed Stadium, Abu Dhabi. We had observed in the previous matches played here that the pitch here at this venue is good for batting in early overs. We had seen a total score of near about 220 runs in the most recent three matches played here. The track has a good amount of pace and bounce which allows the batsmen for the good cricketing shorts but this ground also has big boundaries which can be a plus point for the bowlers. A score of 180 plus seems to be a par score.

Rohit Sharma, Kieron Pollard, and Andree Russell are the key players to watch in this match.

Dream11 fantasy team lineup prediction for Mumbai Indians vs Kolkata Knight Riders 34th Match IPL 2021. After checking the latest player’s availability, which players will be part of both teams, the possible tactics that the two teams might use as we had learned from previous seasons of the Indian Premier League to make the best possible Dream11 team.