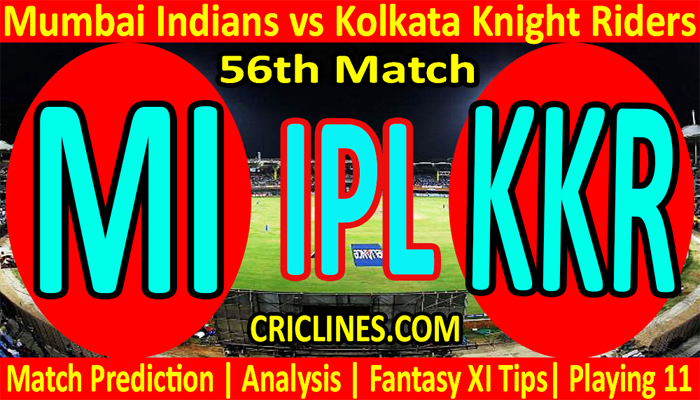 The cricket fans are ready to witness yet another big battle of the IPL 2022. The 56th match of the Indian Premier League 2022 is scheduled to play between Mumbai Indians and Kolkata Knight Riders on Monday, 9th May 2022 at Dr. DY Patil Sports Academy, Mumbai. We are posting safe, accurate, and 100% secure today match prediction of IPL T20 2022 with live IPL score and ball by ball updates with prediction.

MI had bounced back in IPL 2022 but we think that it is too late. They had won the previous two matches continuously. We don’t think that they can qualify for the playoff as they had won just two out of ten matches played till now. They had lost eight matches and are laying at the bottom of the points table. Their most recent match against the second-best performing team, Gujarat was very interesting which they won by the margin of just five runs. On the other side, KKR is the other team that had a good start to IPL 2022 but they failed to continue the winning way and had many matches in a row. They had also played eleven matches with just four wins to their name. They had lost seven matches and are holding the eighth position on the table. Their chances of moving forward to the next level of IPL 2022 are very short. They had lost their most recent match against LSG by a huge margin of 75 runs. This match is going to be very interesting as both teams have nothing to lose and will play this match freely.

MI is back on the winning track and this had happened due to the best performance by the batting order. The main problem of Mumbai was that their opening pair was not providing a good opening start to the middle and lower batting order. They had proved a good start and we had seen the results in the previous both matches. They scored 177 runs in 20 overs in the last match against GT. Ishan Kishan and Rohit Sharma provided an opening start of 74 runs for the partnership of the first wicket. The middle and lower batting order of MI is also back to good form. Suryakumar Yadav, Tilak Varma, Kieron Pollard, Tim David, and Daniel Sams are playing well with the bat. Ishan Kishan was the highest run-scorer with 45 runs to his name on 25 balls with the help of five boundaries and one huge six. Tim David was the other batter who had an outstanding performance with the bat. He scored 44 runs while he faced just 21 balls and smashed two boundaries and four huge sixes during his inning. He remained not out till the 20 overs.

Rohit Sharma is back to the good form and this is a good point for MI. Tilak Varma scored 21 runs. The big problem of Mumbai is its bowling department. They lost eight matches in a row and the major reason was the failure of the bowling department behind this. We saw exactly in the most recent match against GT even though they defend the target of 178 runs but leaked 172 runs in 20 overs. Daniel Sams and Jasprit Bumrah are leading the bowling department but had not provided any early breakdown in any match. Murugan Ashwin, Riley Meredith, Kumar Kartikeya, and Kieron Pollard are also handling the bowling department. We think that the management of Mumbai needs to test some bowlers from the bench strength. Murugan Ashwin was the most successful bowler in the previous match with two wickets to his name in four overs against 29 runs. Kieron Pollard was the other bowler who had a wicket to his name in two overs while he was charged for 13 runs. No other bowler from the side of Mumbai could manage to pick any wicket. Kumar Kartikeya, Riley Meredith, Jasprit Bumrah, and Daniel Sams were the bowlers who remained wicketless in the previous match against Gujarat.

KKR won a match after losing four matches continuously but lost the next match against Lucknow by a huge margin. Kolkata had failed to give the best performance in almost all departments of the game like batting, bowling, and even fielding. They leaked 175 runs in 20 overs in the previous match against LSG. Tim Southee, Shivam Mavi, Sunil Narine, Anukul Roy, Harshit Rana, and Andre Russell are the key bowlers of KKR but no bowler had been outstanding with the ball. We think that they need to make some key changes in the bowling squad to have some chances to win the next matches. Andre Russell was the highest wicket-taker with two wickets to his name in just two overs against 22 runs. Tim Narine, Shivam Mavi, and Tim Southee picked one wicket each in the previous match while Anukul Roy and Harshit Rana could not pick any wicket. Shivam Mavi proved the most expensive bowler who leaked 50 runs in four overs while Harshit Rana was charged for 27 runs in just two overs.

The batting order of KKR had totally collapsed in the previously played matches. The most recent match against LSG is a key witness of it where their full team came back to the pavilion in 14.3 overs on the total of just 101 runs while chasing the target of 177 runs. Baba Indrajith is opening the batting inning of KKR with Aaron Finch but had not provided a good opening start in any match. Shreyas Iyer, Nitish Rana, Rinku Singh, Andre Russell, and Sunil Narine are the other batters who are part of the final playing eleven of KKR. Sunil Narine and Andre Russell were the highest run-scorers in the previous match. Andre Russell scored 45 runs on just 19 balls with the help of three boundaries and five huge sixes while Sunil Narine scored 22 runs on 13 balls and smashed three boundaries and one huge six during his inning. Baba Indrajith, Anukul Roy, and Tim Southee were the batters who could not even open the account on the scoreboard and they got out on golden ducks. Aaron Finch scored 14 runs while no other batter from the side of KKR could even enter into a double-figure. We are sure that the management of KKR will make some key changes in the final playing eleven for this match.

MI had played 30 matches against KKR where they had won 22 matches while Kolkata had won just eight matches.

Mumbai Indians had won two out of the most recent five matches they had played while Kolkata Knight Riders had won just one match out of five recently played matches.

Mumbai Indians is overall a strong team when we compare with Kolkata Knight Riders. They have the best players in the t20 format of cricket. The batting order of this team is also strong and some well-known hitters of the t20 format are part of the squad of this team, so the winning chances of today’s match for Mumbai Indians have been increased. The equation of who will win today’s cricket match prediction and who will win the cricket match today is mentioned as under.

The 56th match of IPL T20, 2022 is going to be held at the Dr. DY Patil Sports Academy, Mumbai. We had observed in the previous matches played here that the pitch here at this venue is good for batting in early overs. The track has a good amount of pace and bounce which allows the batsmen to the good cricketing shorts but this ground also have big boundaries which can be a plus point for the bowlers. A score of 190 plus seems to be a par score.

Ishan Kishan, Rohit Sharma, and Andre Russell are the key players to watch in this match.

Dream11 fantasy team lineup prediction for Mumbai Indians vs Kolkata Knight Riders 56th Match IPL 2022. After checking the latest player’s availability, which players will be part of both teams, the possible tactics that the two teams might use as we had learned from previous seasons of Indian Premier League to make the best possible Dream11 team.