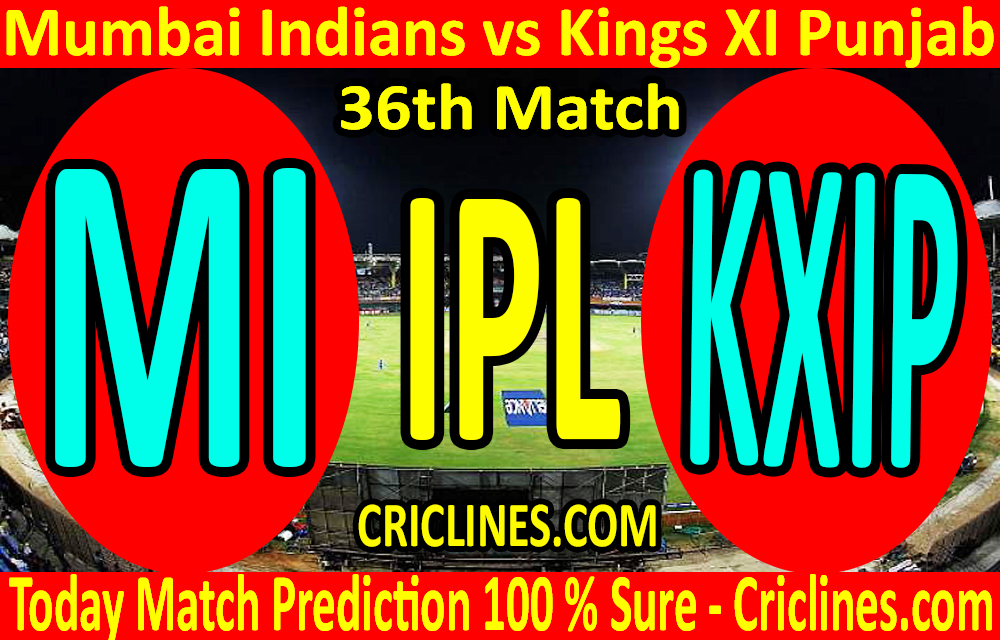 The world is ready to witness yet another big battle of the Indian Premier League. The 36th Match of Dream11 IPL T20 is scheduled to play between Mumbai Indians and Kings XI Punjab on Sunday, 18th October 2020 at Dubai International Cricket Stadium, Dubai. We are posting safe, accurate, and secure today match prediction for all matches of IPL T20 free.

The performance of the defending champions, Mumbai Indians had been good in this season of IPL T20 so far. They had played a total of eight matches so far with six wins to their name. They had lost eight matches and are leading the points table of Dream11 IPL 2020. They are coming to this match on the back of a massive win over Kolkata Knight Riders in their most recent match with a handsome margin of eight wickets. They lost the toss and were asked to field first. The performance of their bowling unit was outstanding in that match. They leaked 148 runs in their inning of 20 overs. Almost all bowlers from their side performed well in the previous match. Rahul Chahar was the most successful and highest wicket-taker from their side who picked two wickets in his four overs bowled out against just 18 runs. Jasprit Bumrah also had a good performance with the ball. He picked one wicket in his four overs bowled out while he leaked 22 runs. Trent Boult also picked one wicket in his four overs against 32 runs. Coulter-Nile was the other bowler from the MI side who picked one wicket but he leaked plenty of runs. He was charged for 51 runs in his four overs bowled out. Krunal Pandya was the only bowler from their side who failed to pick any wicket in his four overs bowled out while he leaked 23 runs.

The way how the batting order of Mumbai Indians performed in the previous match was just outstanding. They chased the target of 149 runs in 16.5 overs with eight wickets in hand. Almost all batsmen from their side put some runs on the board. Quinton de Kock was the most successful and highest run-scorer from their side who remained not out after scoring 78(44) runs. He smashed nine boundaries and three huge sixes. The skipper, Rohit Sharma also had a good performance with the bat in the previous match. He scored 35(36) runs with the help of five boundaries and one six. Suryakumar Yadav could manage to score just 10 runs in the previous match while Hardik Pandya remained not out after smashing the inning of 21 runs on just eleven deliveries. He smashed three boundaries and one huge six during his inning.

Kings XI Punjab had almost failed to give their best performance in this season of the Indian Premier League. They had played a total of eight matches so far with just two wins to their name. They had lost six matches and are laying at the bottom of the points table. They won the previous match against Royal Challengers Bangalore after losing five matches in a row. They lost the toss and were put into the field first. Their bowling unit almost failed to perform well once again in the previous match. They were charged for 171 runs in their inning of 20 overs. M Ashwin was the most successful bowler from their side who picked two wickets in four overs bowled out against 23 runs. Mohammed Shami also picked two wickets but he leaked plenty of runs. He was charged for 45 runs in his four overs bowled out. He leaked 24 runs in the last over he bowled. Arshdeep Singh and Chris Jordan picked one wicket each while Ravi Bishnoi and Glenn Maxwell were the bowlers who failed to pick any wicket.

Kings XI Punjab won the previous match due to the best performance by their batting order. They chased the target of 172 runs on the last ball of their inning. Almost all batsmen from their side put some runs on the board. The skipper, KL Rahul was the most successful and highest run-scorer from their side who scored 61(49) with the help of one boundary and five huge sixes. He remained not out till the chase of the target. Chris Gayle, who played his very first match of this season of IPL, had an outstanding performance. He scored 53(45) and smashed one boundary and five sixes. Mayank Agarwal was the other batsman from the KXIP side who had a superb performance with the bat. He scored 45(25) runs and smashed three sixes and four boundaries. Nicholas Pooran came to bat when they needed one run on one ball. He smashed a huge six and won the match for the Kings XI. Finally, Kings XI had got the momentum back but they are at the crucial stage. They had to win all remaining matches with a handsome margin to qualify for the next round of this tournament.

The 36th Match match of the Indian Premier League is going to be held at the Dubai International Cricket Stadium, Dubai. We had observed in the previous matches played here that the pitch here at this venue is good for batting. The track is slower than the others we have seen and helps the spinners quite a bit. We are hoping that the surface is bound to get slower and be a bit more difficult for batting in this match. A score of 175 is going to be tough to chase.

Dream11 fantasy team lineup prediction for Mumbai Indians vs Kings XI Punjab 36th Match IPL 2020. After checking the latest players’ availability, which players will be part of both teams, he possible tactics that the two teams might use as we had leaned from previous seasons of Indian Premier League to make the best possible Dream11 team.