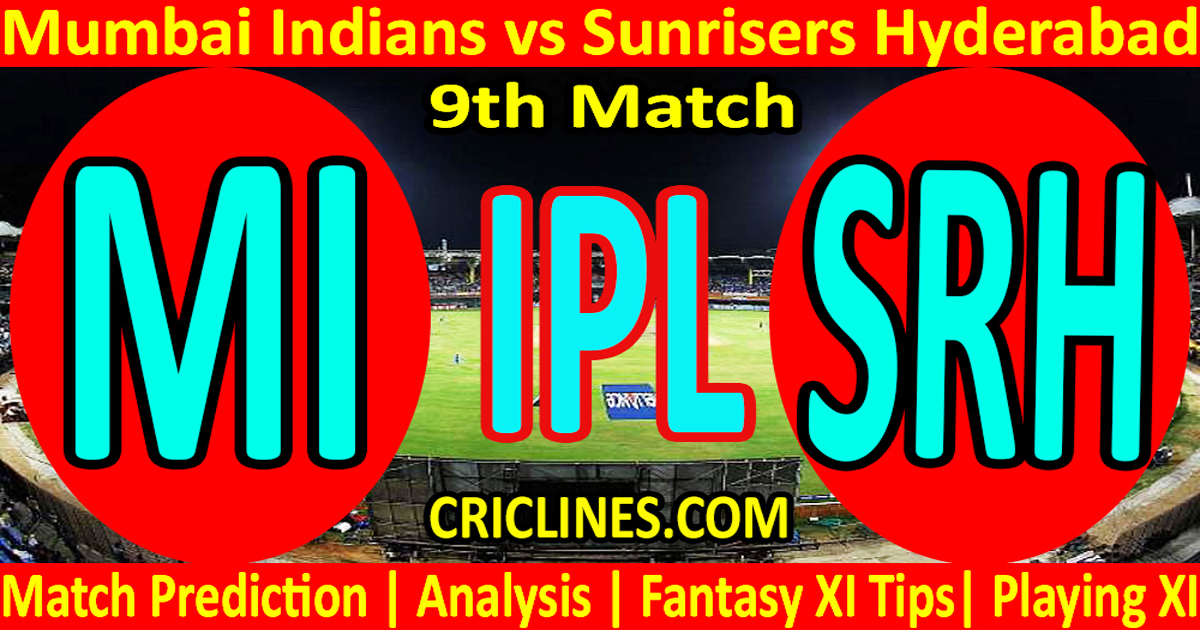 The cricket fans are ready to witness yet another big battle of the IPL T20. The 9th Match of the Indian Premier League is scheduled to play between Mumbai Indians and Sunrisers Hyderabad on Saturday, 17th April 2021 at MA Chidambaram Stadium, Chennai. We are posting safe, accurate, and 100% secure today match prediction for all matches of IPL T20 free.

Mumbai Indians showed in the previous match that why they are the most successful team of IPL T20. They defended a low target of 153 runs against Kolkata Knight Riders. Mumbai Indians have a strong and experienced batting order on their side but we had not seen the best performance in their both recently played matches. In the first match against RCB, they scored 159 runs and in the second match against KKR, they could manage to score 153 runs. The big guns of Mumbai Indians like Hardik Pandya, Kieron Pollard, and even Rohit Sharma had failed to put some big runs on the board. Rohit Sharma spent some time on the pitch in the previous match but failed to convert his inning into a big total. We don’t think that Mumbai Indians will change their squad for this match as the pitch at Chennai had changed its behavior and a score of 165 plus is very difficult to chase. Mumbai Indians have some players in their squad who are capable to score some big runs on this pitch.

Mumbai Indians is a team that had a world-class bowling department on the side. Jasprit Bumrah, Krunal Pandya, Rahul Chahar, Marco Jensen, and Trent Boult had shown the class in the previous match against Kolkata Knight Riders and defended the target of 154 runs. Jasprit Bumrah proved the most successful bowler on the pitch of Chennai in the previous match and picked two wickets in his four overs bowled out against 26 runs. Marco Jansen was the other bowler who destroyed the batting order of KKR. He also picked two wickets in his four overs while he was charged for 28 runs. Krunal Pandya also gave his best bowling performance in the most recent match and picked one wicket in four overs against 25 runs. Trent Boult did not prove the best bowler as he leaked 36 runs in four overs and picked one wicket. Rahul Chahar was the bowler who proved the most expensive bowler in the previous match. He was charged for 43 runs and also failed to pick any wicket in the previous match.

Sunrisers Hyderabad had played two matches and have no points on the points table. The most recent match which they lost against Royal Challengers Bangalore was very easy for them to win. When a team fails to chase the target of just 150 runs and you also have the players like David Warner, Jonny Bairstow, Manish Pandey, Jason Holder, Wriddhiman Saha, and even Rashid Khan, how someone can expect that they will face the strong team of this tournament. This situation creates some important questions for the management of this team. Why Kane Williamson is still sitting on the bench and why the best bowlers of this team are not getting a chance in playing eleven?. In our opinion and reports, Kane Williamson will still stay on the bench and will not replace Jonny Bairstow.

David Warner, Rashid Khan, and Jason Holder had cemented their place in the final playing eleven for upcoming matches. We don’t think that Wriddhiman Saha is the best option to open the inning with Jonny Bairstow. The middle batting order of Sunrisers Hyderabad is strong at least on papers and Abdul Samad, Vijay Shankar, Jason Holder, Manish Pandey, and even Rashid Khan can bat well in the middle and last overs if they get a good start by their top order. In the previous match, the bowling department of Sunrisers Hyderabad did the job properly and we can’t blame the performance of the bowling unit. Rashid Khan had performed well in both opening matches and had picked key wickets and even Jason Holder also had a superb start in the previous match with three wickets to his name. Shahbaz Nadeem was also good with the ball in the middle overs but he was not the best option to bowl the last over in our opinion.

Mumbai Indians had won three out of five most recent matches played while Sunrisers Hyderabad had won two out of five recently played matches.

Mumbai Indians is overall a strong team than Sunrisers Hyderabad. They have the best players in the t20 format. The batting order of this team is also strong and some well-known hitter of t20 format is part of the squad of this team, so the winning chances of today match for Mumbai Indians have been increased. The equation of who will win today cricket match prediction and who will win the cricket match today is mentioned as under.

The 9th Match of IPL T20, 2021 is going to be held at the MA Chidambaram Stadium, Chennai. We had observed in the previous matches played here that the pitch here at this venue is good for batting in early overs. The track is slower than the others we have seen and helps the spinners quite a bit. We are hoping that the surface is bound to get slower and be a bit more difficult for batting in the last overs this match. A score of 185 seems to be a par score.

Dream11 fantasy team lineup prediction for Mumbai Indians vs Sunrisers Hyderabad 9th Match IPL 2021. After checking the latest players’ availability, which players will be part of both teams, the possible tactics that the two teams might use as we had learned from previous seasons of the Indian Premier League to make the best possible Dream11 team.