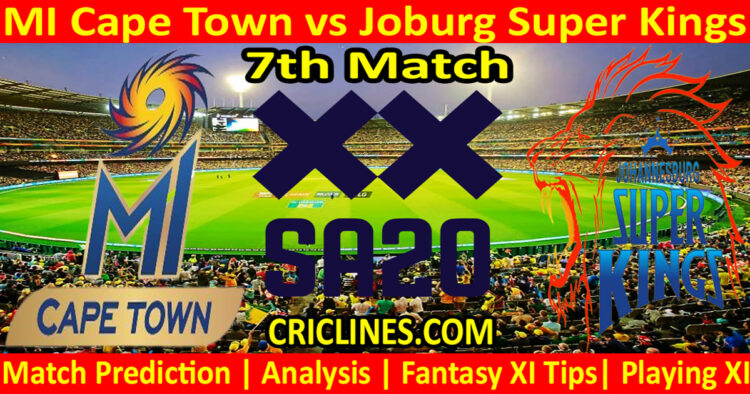 The cricket fans are ready to witness yet another big battle of the SA20 T20 League 2023. The 7th match of the South Africa T20 League 2023 is scheduled to play between MI Cape Town and Joburg Super Kings on Saturday, 14th January 2023 at Newlands, Cape Town. We are posting safe, accurate, and 100% secure today match prediction of SA20 T20 2023 with live SA20 socres.

MI Cape Town lost the previous match due to a batting collapse. Dewald Brevis went back to the pavilion in the early overs and the rest of the batting could not stand. Grant Roelofsen spent some time on the crease. Delano Potgieter and George Linde had some hard-hitting in the lower overs. Rassie van der Dussen, Sam Curran, and Dewald Brevis are their three key batsmen but could not put some big runs on the board. These players have to perform well in the next matches to play a main role for their team. These batters should focus and think that why these were out of control in the middle overs.

Olly Stone was the best-performing bowler the main bowlers of MI Cape Town disappointed. Sam Curran, Jofra Archer, and Rashid Khan failed to pick a single wicket. We think that Kagiso Rabada will replace Jofra Archer in this match. MI Cape Town scored just 152 runs in the previous match. Roelofsen proved the highest run-scorer with 52 runs in his account. George Linde scored 33 runs while Delano Potgieter smashed the inning of 25 runs on just 11 balls with the help of three huge sixes. Olly Stone picked up four wickets in 3.3 overs against just 28 runs. George Linde was the other bowler with one wicket to his name. Sam Curran and Rashid Khan should give the best performance in this match to find MI Cape Town on the winning side.

The batting order of Joburg Super Kings totally collapsed in the previous match as their full team came back to the pavilion on a total of just 81 runs in 17.3 overs. Their seven key batsmen came back to the pavilion on just 36 runs but Romario Shepherd and Donavan Ferreira showed some good batting. The batting order of the Kings is not weak. Faf du Plessis, Kyle Verreynne, Reeza Hendricks, and Janneman Malan are part of the batting squad of this team and we are sure that they will perform well in the next matches.

The bowling unit of Joburg Super Kings is also strong and experienced and they performed well in the previous match but failed to defend a low target on the board and leaked the target of 82 runs in 10.3 overs. Aaron Phangiso, Romario Shepherd, and George Garton picked one wicket each while Alzarri Joseph, Lizaad Williams, and Lewis Gregory were the bowlers who failed to pick any wicket. The batting order of Joburg Super Kings is very strong and if they get some help from their bowlers, we are sure that they will perform well in this match.

MI Cape Town is overall a strong team when we compare it with Joburg Super Kings. They have the best players of the t20 format of cricket. The batting order of this team is also strong and some well-known hitters of the t20 format are part of the squad of this team, so the winning chances of today’s match for MI Cape Town have been increased. The equation of who will win today cricket match prediction and who will win the cricket match today is mentioned as under.

The 7th match of SA20 T20, 2023 is going to be held at Newlands, Cape Town. We had observed in the previous matches played here that the pitch here at this venue is good for batting in early overs. The track has a good amount of pace and bounce which allows the batsmen to the good cricketing shorts but this ground also has big boundaries which can be a plus point for the bowlers. A score of 190 plus seems to be a par score.

The weather forecast for Cape Town is good this cricket match. There are almost no chances of rain in the region and we are hopeful that we will have a full match to enjoy.

Alzarri Joseph, Sam Curran, and Olly Stone are key players to watch in this match.

Dream11 fantasy team lineup prediction for MI Cape Town vs Joburg Super Kings 7th Match SA20 2023. After checking the latest player’s availability, which players will be part of both teams, and the possible tactics that the two teams might use as we had learned from previous seasons of SA20 T20 League to make the best possible Dream11 team.

We had provided you with the above-mentioned today prediction on the basis of our research, understanding, and analysis. These prediction tips have also been based the reports that we have from our different sources. You can consider the point we had provided you and the final decision will be yours that you have to make at your own risk.