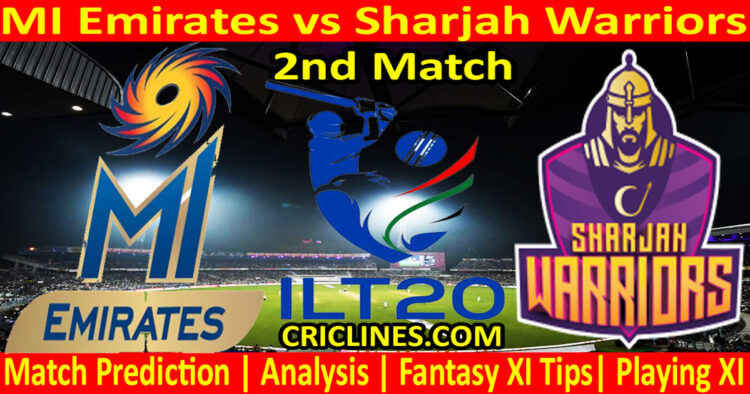 The cricket fans are ready to witness yet another big battle of the IL 2023. The 2nd match of the International League 2023 is scheduled to play between MI Emirates and Sharjah Warriors on Saturday, 14th January 2023 at Sheikh Zayed Stadium, Abu Dhabi. We are posting safe, accurate, and 100% secure today match prediction of IL T20 2023 with live IL scores and ball by ball updates with prediction.

The inaugural edition of an International league known as IL T20 is on the roads and we saw the first match which was very interesting. We are hoping that almost each and every match of this league will be a close contest as almost all teams in this tournament are equal in strength. The second match of this tournament will be played between MI Emirates and Sharjah Warriors. We are hoping that this match will also interesting competition.

MI Emirates had picked Kieron Pollard as their captain and we all know how strong batsman is he. Dwayne Bravo is other compainion of Pollard and these both batsmen are well known hard hitters specially in T20 cricket. Andre Fletcher, Nicholas Pooran, and Will Smeed other big names of cricket in the squad of MI Emirates and these batsmen will have the help of experianced batsmen like Basil Hameed, Muhammad Waseem, and Bas de Leede.

Almost all teams in International League T20 had picked big names of West Indies but Sharjah Warriors are the only team that doesn’t have more West Indian players. Moeen Ali is going to lead the Warriors in this tournament. He is an experienced player and led the England team during the tour of Pakistan. England won the ODI series against Pakistan under his leadership. The batting order of Sharjah Warriors is very strong and Chris Woakes, Paul Walter, Joe Denly, and Dawid Malan will handle the top batting order of the Warriors.

Sharjah Warriors have the services of some best all-rounders. Marcus Stoinis recently played in Big Bash League and will continue his good form in this tournament. Rahmanullah Gurbaz and Evin Lewis are also available for the selection of the playing eleven of this match. Naveen ul Haq and Noor Ahmad are two experienced players from Afghanistan. They had played a lot of cricket in UAE and we are hoping that they will play the main role of Warriors in each and every match of this tournament. The addition of Junaid Siddique and Karthik Meiyappan adds more power to the squad of Sharjah Warriors.

Sharjah Warriors is overall a strong team than MI Emirates. They have the best players in the t20 format of cricket. The batting order of this team is also strong and some well-known hitters of the t20 format are part of the squad of this team, so the winning chances of today’s match for Sharjah Warriors have been increased. The equation of who will win today’s cricket match prediction is mentioned as under.

The 2nd match of IL T20, 2023 is going to be held at the Sheikh Zayed Stadium, Abu Dhabi. We had observed in the most recent matches played here that the pitch here at this venue is good for batting especially in early overs. The track has a good amount of pace and bounce which allows the batsmen for the good cricketing shorts but this ground also has big boundaries which can be a plus point for the bowlers. The dew will play a major part in the second inning. A score of 180 plus seems to be a par score on this venue.

The weather forecast for Abu Dhabi is good for this cricket match. There are almost no chances of rain in the region and the weather will be good at night as we know that the nights are cooler in UAE in the winter season.

Kieron Pollard, Moeen Ali, and Dawid Malan are key players to watch in this match.

Dream11 fantasy team prediction for today’s match of MI Emirates vs Sharjah Warriors IL 2023. After checking the latest player’s availability and which players will be part of the playing eleven of both teams, the possible tactics that the two teams might use as we had learned from previous matches played here to make the best possible Dream11 team.