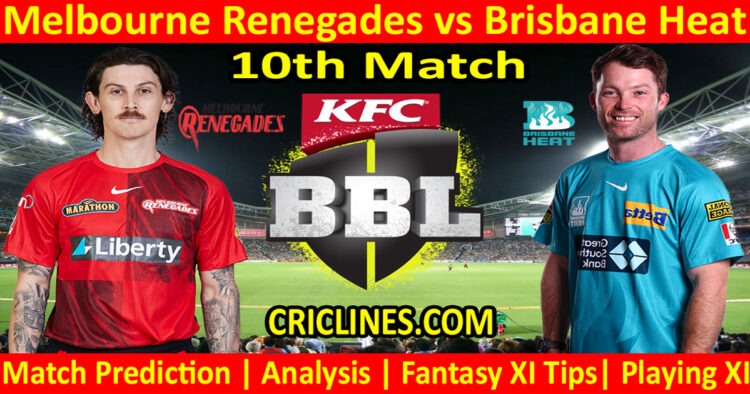 The cricket fans are ready to witness yet another big battle of BBL T20. The 10th match of Big Bash League 2022-23 is scheduled to play between Melbourne Renegades and Brisbane Heat on Wednesday, 21st December 2022 at Simonds Stadium, Geelong. We are posting safe, accurate, and secure today match prediction of BBL T20 free.

We are in the early matches of the Big Bash League but it looks like Melbourne Renegades had put a strong squad for this tournament. They had been just outstanding in this tournament and had won their both played matches and are holding the second position on the ladder. Remember that they had beaten the same team, Brisbane Heat earlier in this tournament.

Brisbane Heat had totally failed to give the best performance in this season of Big Bash League. They had played just one match which they lost against the Renegades. They are holding the seventh position on the points table. Will they open the account on the scoreboard? we don’t think so as they are going to lose this match.

The batting order of Melbourne Renegades had been good in both previous matches and put a handsome total on the board. The key batsmen of this team are in good knock. Nic Maddinson, Andre Russell, and Aaron Finch had been the top run-scorer in the previous matches and we think that these batsmen will also perform well in this match. Jonathan Wells, Same Harper, and Jake Fraser are also good batters of white ball cricket and they also strike well in the middle and lower overs. Melbourne Renegades had made some excellent choices in the bowling unit and they also had performed well in the previous matches. Akeal Hosein is the leading bowler of this side and he had proved good in the early overs with the new ball.

Mujeeb ur Rahman, Kane Richardson, Andre Russell, and Will Sutherland had also performed well in the previously played matches and the Renegades have the best bowling unit. Melbourne Renegades won their previous match against Sydney Thunder with a good margin of four wickets. They lost the toss and were asked to field first. The performance of their bowling unit was not good and they leaked 174 runs in 20 overs. Tom Rogers was the highest wicket-taker from their side but he also leaked a lot of runs. He picked up two wickets while he was charged with 41 runs in four overs. Akeal Hosein, Kane Richardson, Mujeeb ur Rahman, and Andre Russell picked one wicket each. The batting order of the Renegades also performed well and chased the target of 175 runs in 19.5 overs. Aaron Finch was the highest run-scorer from their side with 70 runs on 43 balls with the help of seven boundaries and two huge sixes. He remained not out till the chase of the target. Nic Maddinson scored 39 runs while Jake Fraser McGurk had 24 runs to his name.

Brisbane Heat had played just one match and we can’t make any opinion about the strength of this team. The performance of the batting order of Brisbane Heat was not much impressive and we think that they will expose more in this match. Colin Munro and Max Bryant are the top two batsmen on this team. We don’t think that these two batters can provide a good partnership. Ross Whiteley and Sam Billings are two overseas batsmen of this team while Xavier Bartlett, James Bazley, Mark Steketee, Mitch Swepson, and Matthew Kuhnemann are also part of the squad this team we are expecting that these players can perform well in this match. We will see the strength of the Heat in the next matches.

Brisbane Heat lost their very first match of this edition of Big Bash League against the same team, Melbourne Renegades by the margin of 22 runs where they won the toss and decided to field first. The performance of their bowling unit was good as they leaked 166 runs on a batting-favored pitch in 20 overs. M Kuhnemann was the most successful and highest wicket-taker from their side with three wickets to his name in four overs against 32 runs. Bazley picked one two wickets in four overs while he was charged with just 19 runs. Steketee and Swepson picked one wicket each. The batting order of the Heat totally failed to give the best performance and they could manage to score just 144 runs while chasing the target of 167 runs. The skipper, Jimmy Peirson was the most successful and highest run-scorer from their side with 43 runs to his name. He faced 30 balls and smashed two boundaries and the same huge sixes. Colin Munro scored 35 runs while Ross Whiteley remained not out after scoring 28 runs.

Sam Billings, Andre Russell, and Akeal Hosein are key players to watch in this match.

The 10th match of Big Bash League 2022-23 is going to be held at Simonds Stadium, Geelong. We had observed in the previous matches played here that the pitch here at this venue is good for batting. The track is slower than the others we have seen and helps the spinners quite a bit. We are hoping that the surface is bound to get slower and be a bit more difficult for batting in this match. A score of 185 is going to be tough to chase.