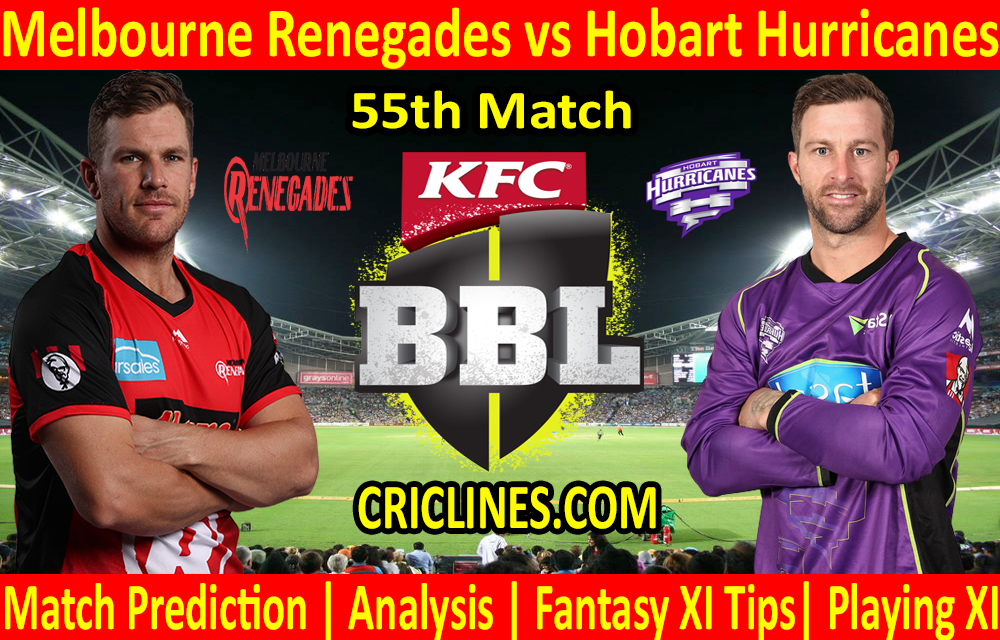 The cricket fans are ready to witness yet another big battle of BBL T20. The 55th Match of Big Bash League 2020-21 is scheduled to play between Melbourne Renegades and Hobart Hurricanes on Tuesday, 26th January 2021 at Melbourne Cricket Ground, Melbourne. We are posting safe, accurate, and secure today match prediction for all matches of BBL free.

Melbourne Renegades had totally failed to perform well in this season of the Big Bash League. They are the worst-performing team of this tournament and this will be their last match of this edition of the BBL T20. They had played a total of 13 matches with just three wins to their name. They had lost 10 matches and are laying at the bottom of the points table. They were beaten by Brisbane Heat in their most recent match by the margin of 26 runs. They lost the toss and were asked to field first. Their bowling unit almost failed to give their best performance in the previous match. They leaked 173 runs in their inning of 20 overs. Zak Evans was the highest wicket-taker from their side who picked three wickets in his four overs bowled out against 34 runs.

Imad Wasim and Peter Hatzoglou picked one wicket each while Jack Prestwidge, Fraser-McGurk, Josh Lalor, and Beau Webster were the bowlers who failed to pick any wicket. The batting order of Melbourne Renegades also failed to perform well in the previous match. They failed to chase the target of 174 runs and were all-out on a total of 147 runs in 18.4 overs. Sam Harper was the highest run-scorer from their side who scored 57 runs. He faced 32 deliveries and smashed four boundaries and the same huge sixes. Shaun Marsh scored 28 runs while Jack Prestwidge had 19 runs to his name.

The performance of Hobart Hurricanes had been average in this season of BBL T20. They had played a total of 13 matches with seven wins to their name. They had lost six matches and are holding the 5th position on the points table. They had to win this match with a handsome margin to have a chance to qualify for the playoff. They are coming to this match on the back of a win over Sydney Sixers in their previous match by the margin of seven runs. They lost the toss and were asked to bat first. The way how their batting order performed in that match was just outstanding. They scored a total of 188 runs in their inning of 20 overs. The skipper, Matthew Wade was the most successful and highest run-scorer from their side who scored 86 runs. He faced 44 deliveries and smashed 10 boundaries and three sixes during his inning.

D Arcy Short was the other batsmen from the side of Hobart Hurricanes who put some runs on the board. He scored 72 runs on 52 deliveries with the help of seven boundaries and three sixes. No other batsmen from their side could score big runs. The bowling unit of Hobart Hurricanes almost failed to give their best performance in the previous match but they defended the target of 189 runs and leaked 181 runs in their inning of 20 overs. Nathan Ellis was the highest wicket-taker from their side who picked three wickets in his four overs bowled out while he was charged for 36 runs. Scott Boland picked two wickets in his four overs against 23 runs. Sandeep Lamichhane also picked two wickets while he leaked 24 runs in his four overs bowled out. Riley Meredith had one wicket to his name.

Head to Head Record Between Melbourne Renegades and Hobart Hurricanes

Hobart Hurricanes are full of experienced and young players of the t20 format. The batting order of this team is also strong and some well-known hitter of t20 format is part of the squad of this team, so the winning chances of today match for Hobart Hurricanes have been increased. The equation of who will win today cricket match prediction and who will win the cricket match today is mentioned as under.

The 55th Match of Big Bash League 2020-21 is going to be held at Melbourne Cricket Ground, Melbourne. We had observed in the previous matches played here that the pitch here at this venue is good for batting. The track is slower than the others we have seen and helps the spinners quite a bit. We are hoping that the surface is bound to get slower and be a bit more difficult for batting in this match. As per the live cricket score, a total of 185 is going to be tough to chase. 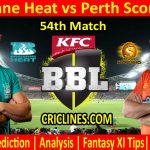 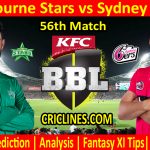