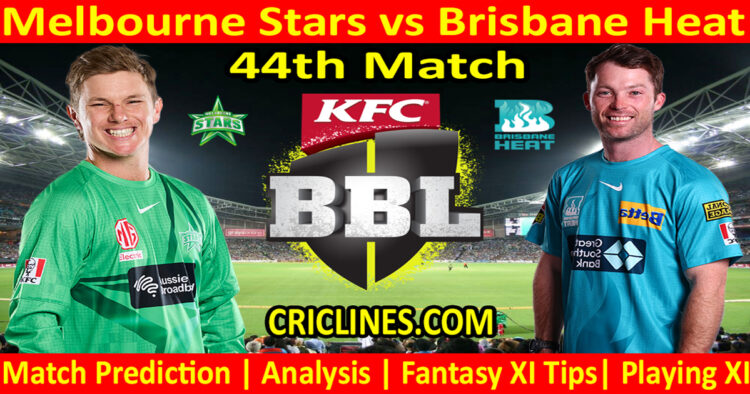 The cricket fans are ready to witness yet another big battle of BBL T20. The 44th match of Big Bash League 2022-23 is scheduled to play between Melbourne Stars and Brisbane Heat on Monday, 16th January 2023 at Melbourne Cricket Ground, Melbourne. We are posting safe, accurate, and secure today match prediction of BBL T20.

Both teams, Melbourne Stars and Brisbane Heat had totally failed to give the best performance in this tournament. Melbourne Stars are the worst-performing team of this season of BBL right now. They had won just three out of eleven matches played. They had lost eight matches and are laying at the bottom of the points table. Brisbane Heat had played ten matches with just three wins. They had lost six matches while their one match was tied. They are situated at the second position from the bottom of the table.

The most recent match of Melbourne Stars was very interesting against their city fellow team, Melbourne Renegades by a margin of just six runs. They won the toss and decided to field first. The performance of their bowling unit was average and they leaked 162 runs in 20 overs. Liam Hatcher was the most successful bowler from their side. He picked up two wickets in four overs against 34 runs. Brody Couch also picked two wickets but he leaked plenty of runs. He was charged for 40 runs in three overs. Luke Wood, Clint Hinchliffe, and the skipper, Adam Zampa picked one wicket each.

The batting order of Melbourne Stars performed well but failed to chase of the target of 163 runs and scored 156 runs in 20 overs. Joe Clarke was the most successful and highest run-scorer from their side with 59 runs to his name. He faced 37 balls and smashed two boundaries and five huge sixes. Beau Webster also had an outstanding performance with the bat and scored 29 runs on 18 balls with the help of one boundary and three huge sixes. Beau Webster was the other batsman who put some runs on the board. He scored 27 runs and Nick Larkin remained not 0ut after scoring 21 runs. The Stars are missing their key players and they have to perform well in this match.

Brisbane Heat won their previous match against Adelaide Strikers with a margin of 17 runs. The performance of their batting order was not very good and they scored just 154 runs. Their full team came back to the pavilion in 19.3 overs. Labuschagne was the highest run-scorer from their side. He scored 46 runs on 33 balls with the help of five boundaries. Josh Brown scored 26 runs while Renshaw could manage to score 25 runs. Bazley was the other batsman who put some runs on the board. He scored 20 while Spencer Johnson and Swepson failed to open the account on the scoreboard.

Brisbane Heat won the previous match due to the best performance by their bowling unit. They defended a low target of 155 runs and leaked 137 runs in 20 overs. James Bazley was the most successful and highest wicket-taker from their side. He picked up three wickets in four overs against just 30 runs. Matthew Kuhnemann also had an outstanding performance and picked two wickets in four overs while he was charged for 26 runs. Michael Neser, Spencer Johnson, and Mitchell Swepson picked one wicket each. The bowling unit of the Heat in back to good form and if they get some help by their batting order, we are sure that will give the best performance in the remaining matches.

Joe Clarke, Thomas Rogers, and James Bazley are key players to watch in this match.

Brisbane Heat is full of experienced and young players of the t20 format. The batting order of this team is also strong and some well-known hitters of the t20 format are part of the squad of this team, so the winning chances of today’s match for Brisbane Heat have been increased. The equation of who will win today cricket match prediction and who will win the cricket match today is mentioned as under.

The 44th match of Big Bash League 2022-23 is going to be held at Melbourne Cricket Ground, Melbourne. We had observed in the previous matches played here that the pitch here at this venue is good for batting. The track is slower than the others we have seen and helps the spinners quite a bit. We are hoping that the surface is bound to get slower and be a bit more difficult for batting in this match. A score of 185 is going to be tough to chase.