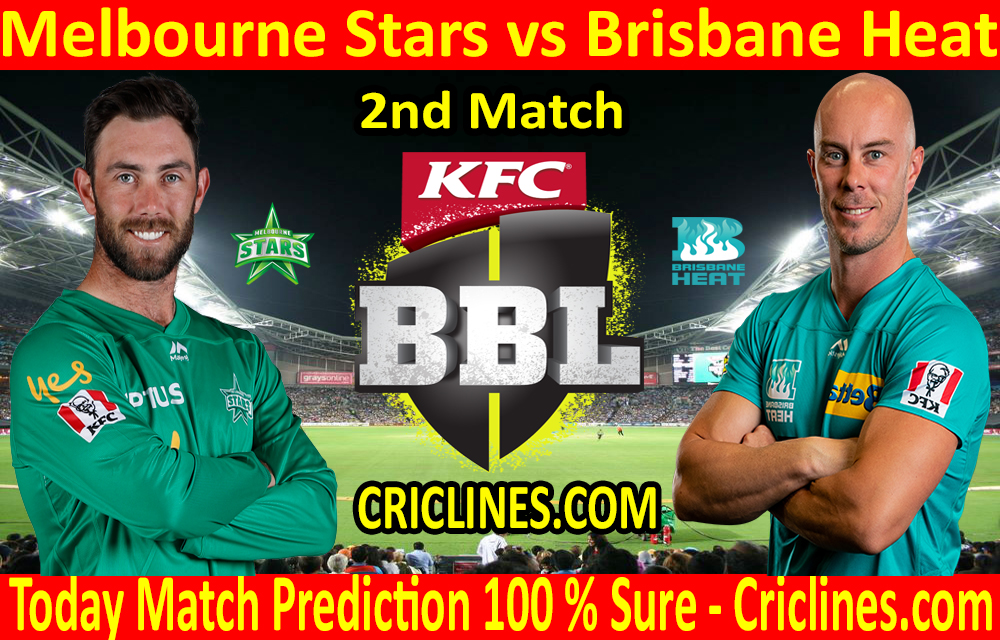 The world is ready to witness yet another big battle of BBL T20. The 2nd Match of Big Bash League 2020-21 is scheduled to play between Melbourne Stars and Brisbane Heat on Friday, 11th December 2020 at Manuka Oval, Canberra. We are posting safe, accurate, and secure today match prediction for all matches of BBL free.

Melbourne Stars was the best top-performing team of the previous season of BBL T20 till the league stage. They won 10 out of 14 matches and were leading the points table after the end of league stage matches. They were beaten by Sydney Sixers in the qualifier match but they beat Sydney Thunder in the Challenger match and made their way to the final but were beaten by Sydney Sixers in the grand final of BBL 9. They had acquired the services of some giants players of the T20 format of cricket and are known as one of the best teams of this tournament. Glenn Maxwell is going to leading this team who is in excellent form as we had observed in the recent series against India.

The batting order of Melbourne Stars is strong at least on papers. Clint Hinchliffe, Nic Maddinson, Will Pucovski, Nick Larkin, Hilton Cartwright, Marcus Stoinis, Ben Dunk, Nicholas Pooran, and Andre Fletcher will be leading the batting order of the Stars with the skipper Glenn Maxwell. Like the batting, the bowling unit of Melbourne Stars is also strong as compared to the other teams. Nathan Coulter-Nile, Lance Morris, Tom O Connell, Billy Stanlake, Adam Zampa, Zahir Khan, Jackson Coleman, Dilbar Hussain, and Liam Hatcher are going to lead the bowling department of the Stars.

Brisbane Heat was the second-worst performing team of the previous season of the Big Bash League. They could manage to win just six out of 14 matches played at the league stage and were laying at the second position from the bottom of the points table after the end of the league stage matches. The squad of this team for this tournament is not much stronger as compared to the other teams. Chris Lynn is going to lead this team during this edition of the BBL T20.

Max Bryant, Joe Burns, Tom Cooper, James Bazley, Daniel Lawrence, Sam Heazlett, and Marnus Labuschagne are the key batters for the Brisbane Heat. The bowling unit of this is not much stronger. Mitchell Swepson, Mujeeb Ur Rahman, Ben Laughlin, and Mark Steketee are the key bowlers of this team. There is not much difference in the squad of the Heat as compared to the previous seasons of this tournament as we are thinking that this team is going to struggle in this tournament.

The 2nd Match of Big Bash League 2020-21 is going to be held at the Manuka Oval, Canberra. We had observed in the previous matches played here that the pitch here at this venue is good for batting. The track is slower than the others we have seen and helps the spinners quite a bit. We are hoping that the surface is bound to get slower and be a bit more difficult for batting in this match. A score of 185 is going to be tough to chase.