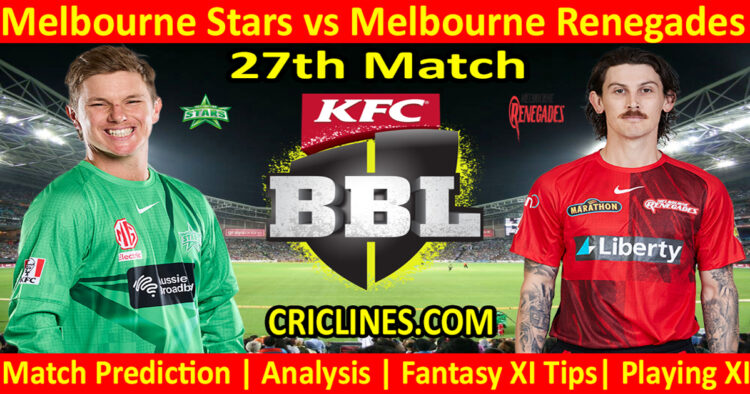 The world is ready to witness yet another big battle of BBL T20. The 27th match of Big Bash League 2022-23 is scheduled to play between Melbourne Stars and Melbourne Renegades on Tuesday, 3rd January 2022 at Melbourne Cricket Ground, Melbourne. We are posting safe, accurate, and secure today match prediction of BBL T20.

The city fellow teams, Melbourne Stars and Melbourne Renegades are going to face each other in this 27th match of the Big Bash League. Both teams had not performed well in this tournament and had been struggling in the previous matches. Melbourne Stars are currently the second-worst performers in this tournament. They had won just two out of six matches played. They had lost four matches and are laying at the second position from the bottom of the points table.

Melbourne Renegades had not performed much better than the Stars in this tournament and it is very difficult for us to say any of these teams is a clear favorite. Melbourne Renegades had played a total of seven matches with three wins to their name. They had lost four matches and are situated in the fifth position on the points table.

We mentioned in the prediction of the very first match of Melbourne Stars that this team is going to struggle throughout this tournament. The best player of the Stars, Glenn Maxwell had been ruled out from this tournament due to his broken leg and the management of this team was hoping that Joe Clarke will fill the space of Maxwell but this had not happened till now. Joe Clarke had performed well but he can’t take the place of Glenn Maxwell. He had scored 232 runs in this edition of the Big Bash League with an average of more than 46. Marcus Stoinis was not good in the previous matches but he played well in the most recent match and due to his best performance, they won their previous match against Adelaide Strikers.

Melbourne Stars won its previous match against Adelaide Striker by the margin of eight runs after losing three matches in a row. They won the toss and decided to bat first. The performance of their batting order was good and they scored 186 runs in 20 overs. Marcus Stoinis was the most successful and highest run-scorer from their side with 74 runs to his name on just 35 balls with the help of five boundaries and six huge sixes. Joe Clarke was the other batsman who put some runs on the board. He scored 42 runs while he faced 32 balls and smashed four boundaries and one huge six. Thomas Rogers scored 30 runs. The bowling unit of the Stars did not perform well but they defended the target of 187 runs and leaked 178 runs in 20 overs. Liam Hatcher was the highest wicket-taker from their side but he also leaked plenty of runs. He picked up two wickets while he was charged for 29 runs in four overs. Trent Boult, Beau Webster, and the skipper, Adam Zampa picked one wicket each.

Melbourne Renegades had a dream start to this edition of the Big Bash League and won their three early matches in a row but lost the momentum after winning the third match and now had lost four matches consecutively. Aaron Finch had been the leading run-scorer from this team in the previous matches. He had scored 236 runs in the previous seven matches. He is in good form and we are hoping that he will perform well in the next matches. Jon Wells is the 4th highest run-scorer in the history of BBL but he had totally failed to perform well in this tournament till now. Martin Guptill is the other batsman that had not been much impressive in this tournament.

Akeal Hosein is playing for Renegades for the first time and he had been the highest wicket-taker from their side in this tournament. He had picked 12 wickets in the previous seven matches and can also perform well in this match. Mujeeb Ur Rahman and Tom Rogers are other bowlers who had been good in this tournament. Peter Handscomb and the skipper, Nic Maddinson also had not been impressive in previous matches. They lost their most recent match against Perth Scorchers by a big margin of eight wickets. The performance of their batting order was not much impressive as they scored just 155 runs in 20 overs. Aaron Finch was the highest run-scorer from their side. He scored 65 runs while he faced 48 balls and smashed six boundaries and two huge sixes. Kane Richardson proved the highest wicket-taker with two wickets to his name in four overs against 21 runs.

Aaron Finch, Marcus Stoinis, and Kane Richardson are key players to watch in this match.

The 27th match of Big Bash League 2022-23 is going to be held at Melbourne Cricket Ground, Melbourne. We had observed in the previous matches played here that the pitch here at this venue is good for batting. The track is slower than the others we have seen and helps the spinners quite a bit. We are hoping that the surface is bound to get slower and be a bit more difficult for batting in this match. A score of 185 is going to be tough to chase.