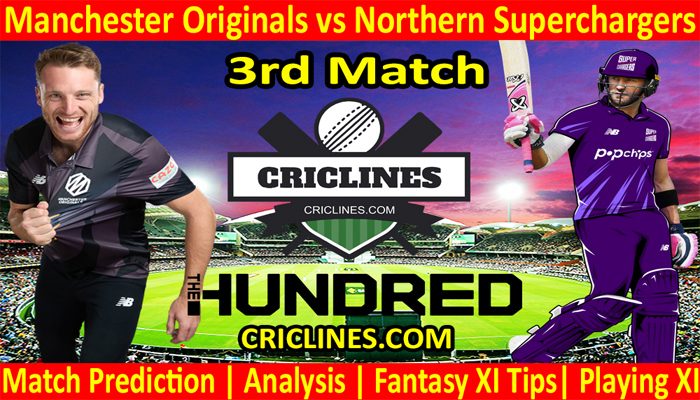 The cricket fans are ready to witness yet another big battle of The 100 League. The 3rd match of The Hundred League 2022 is scheduled to play between Manchester Originals and Northern Superchargers on Friday, 5th August 2022 at Emirates Old Trafford, Manchester. We are posting safe, accurate, and secure today match prediction for all matches of The Hundred Women Competition free.

Manchester Originals and Northern Superchargers are going to face each other in their opening match. The performance of these both teams was not good in the first edition of The Hundred League. Northern Superchargers played eight league matches with just three wins to their name. They lost four matches while their one match ended with no result. They were holding the fifth position on the points table after the completion of league matches. Manchester Originals also played eight league matches. They won two and lost four matches while their two matches ended with no result. They were situated at the sixth position on the points table.

Manchester Originals had learned from the previous edition of The Hundred League and had made some key changes in the squad for this season. They had picked the big names of T20 cricket like Wanindu Hasaranga, Phil Salt, Jos Buttler, and Andre Russell but the availability of these players is a big question. If these all players are available for the selection of the final playing eleven for this match, we are sure that they will give a very tough time to the opposition. Phil Salt had a decent form these days and had played very good innings in the previous matches he had played.

Andre Russell is another dangerous batter and he doesn’t need any introduction. He is a hard hitter, especially in the middle and last overs and also can be used as a bowler in the middle overs. Jos Buttler is also in good form. The bowling department of Manchester Originals is also very dangerous. Matt Parkinson, Wanindu Hasaranga, Sean Abbott, and Richard Gleeson are the key bowlers of this team. Jos Buttler is going to lead this team and it will be interesting to see how he uses the bowlers in this first match. Jos Buttler performed well in the recent edition of IPL but had been struggling in T20 International matches.

Like all other teams, Northern Superchargers also had made some key changes in their squad for this tournament as they finished at the fifth spot in the previous edition of The Hundred League. They have many players in the squad who were part of Chennai Super Kings in the recent edition of IPL. Faf du Plessis is the key batter of this team who will be leading the batting department of this team with Adam Hose, Harry Brook, Adam Lyth, and Michael Pepper. Harry Brook had been outstanding in recent domestic matches. Will perform well in this tournament? this is a big question that should be answered in this match.

Manchester Originals is full of experienced and young players of the t20 foramt. The batting order of this team is also strong and some well-known hitters of the t20 format are part of the squad of this team, so the winning chances of today match for Manchester Originals have been increased. The equation of who will win today’s cricket match prediction and who will win the cricket match today is mentioned as under.

The 3rd Match match of The Hundred League 2022 is going to be held at Emirates Old Trafford, Manchester. We had observed in the previous matches played here that the pitch here at this venue is good for batting. The track is slower than the others we have seen and helps the spinners quite a bit. We are hoping that the surface is bound to get slower and be a bit more difficult for batting in this match. A score of 185 is going to be tough to chase.

Who Will Win Manchester Originals vs Northern Superchargers, 3rd Match The Hundred League-2022