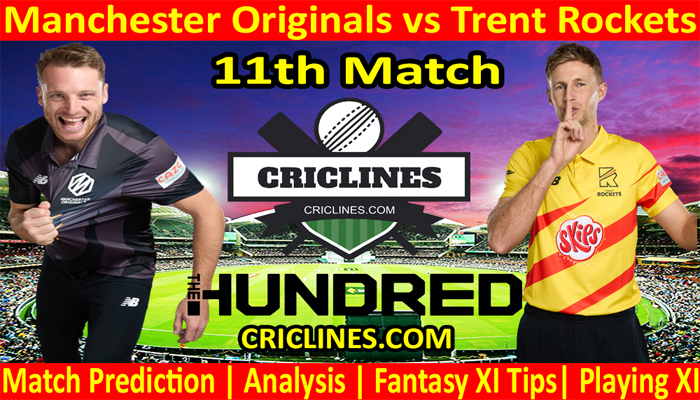 The cricket fans are ready to witness yet another big battle of The 100 League. The 11th match of The Hundred League 2022 is scheduled to play between Manchester Originals and Trent Rockets on Saturday, 13th August 2022 at Emirates Old Trafford, Manchester. We are posting safe, accurate, and secure today match prediction of The Hundred Women Competition free.

Manchester Originals had totally failed to give the best performance in this edition of The Hundred League. They were beaten by Northern Superchargers in the first match earlier and they lost the second match against London Spirit. They are laying at the second position on the points table. Trent Rockets had been good in this tournament in the opening matches. They won both played matches and are situated at the third position on the points table. They have equal points with London Spirit and Oval Invincibles but due to poor net run rate, they are down on the table.

The most recent loss of Manchester Originals came against London Spirit by a big margin of 52 runs. Earlier, they were beaten by Northern Superchargers. The main reason why Manchester Originals lost the first match was the poor performance of the bowling department. The performance of their batting order was good and they put a total of 161 runs on the board in the inning of 100 balls. Almost all batters from their side put some runs on the board. Jos Buttler is the skipper of this team and he is also leading the batting order with Philip Salt, W Madsen, Andre Russell, P Walter, and Laurie Evans. Jos Buttler was the most successful and highest run-scorer from their side who scored 59 runs on 41 balls with the help of six boundaries and one huge six. W Madsen was the other batter who was just good with the bat. He scored 43 runs.

Andre Russell remained not out after scoring 29 runs on just 20 balls. He smashed three huge sixes during his inning. P Walter scored 23 runs. Tom Hartley, Fred Klaassen, Sean Abbott, Matthew Parkinson, Andre Russell, and Ashton Turner are leading the bowling department of Manchester Originals but they failed to give the best performance in the previous match. They leaked the target of 162 runs in 94 balls. Ashton Turner, Andre Russell, Matthew Parkinson, and Fred Klaassen picked one wicket each. We can expect that this team will perform well in this match and will open the account on the scoreboard.

Trent Rockets had won their very first match of this tournament against Northern Superchargers and they beat Birmingham Phoenix with a huge margin of six wickets earlier. The bowling department of Trent Rockets was just good in the first match. They leaked 143 runs in 100 balls inning. Luke Wood, Matthew Carter, Daniel Sams, L Gregory, Rashid Khan, and Samit Patel are the leading bowlers of TRS. Rashid Khan will not available for the selection of this match due to national duty. This is not a good sign for this team as he is a good bowler and can pick wickets in the middle overs. We are sure that they will include another spin bowler as his replacement. Daniel Sams was the most successful bowler in the previous match from the side of Trent Rockets.

Daniel Sams picked three wickets in 20 balls while he was charged for 24 runs. Samit Patel was also good in the previous match. He picked two wickets in 15 balls against just 12 runs. He bowled eight dot balls. L Gregory picked one wicket while Rashid Khan, Matthew Carter, and Luke Wood failed to pick any wicket. The performance of the batting order of Trent Rockets was not much impressive in the previous match but they managed to chase the target of 144 runs on 97 balls. Alex Hales, Dawid Malan, Colin Munro, Joe Root, Tom Kohler-Cadmore, and Lewis Gregory are the leading bowlers of this team. Alex Hales was the most successful batter from their side who scored 58 runs on 41 balls with the help of five boundaries and two huge sixes. Colin Munro also performed well with the bat and scored 36 runs. He faced 22 balls and smashed five boundaries and two huge sixes during his inning. Joe Root was the other batter who was just good with the bat. He remained not out after scoring 34 runs.

Trent Rockets are overall a strong team as compared to the Manchester Originals at least on papers. According to The Hundred prediction, Trent Rockets are the favorite team who will win this match. There are many factors that make Manchester Originals a favorite team to win this match. Some of the key factors are mentioned as under:

Trent Rockets is full of experienced and young players of the t20 format. The batting order of this team is also strong and some well-known hitters of the t20 format are part of the squad of this team, so the winning chances of today match for Trent Rockets have been increased. The equation of who will win today’s cricket match prediction and who will win the cricket match today is mentioned as under.

The 11th Match match of The Hundred League 2022 is going to be held at Emirates Old Trafford, Manchester. We had observed in the previous matches played here that the pitch here at this venue is good for batting. The track is slower than the others we have seen and helps the spinners quite a bit. We are hoping that the surface is bound to get slower and be a bit more difficult for batting in this match. A score of 185 is going to be tough to chase.

Who Will Win Manchester Originals vs Trent Rockets, 11th Match The Hundred League-2022