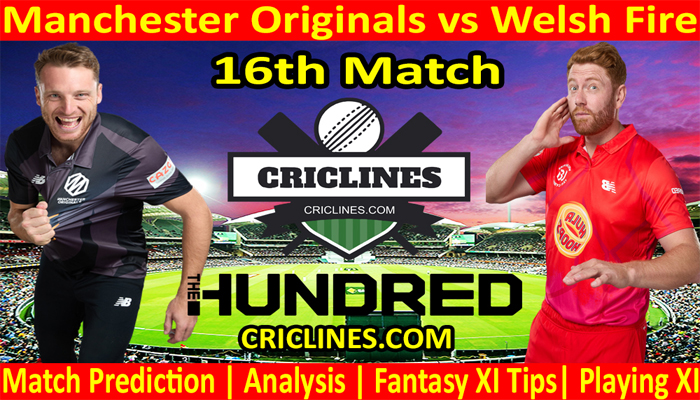 Manchester Originals had played a total of three matches and they are still winless. This is the thing that many of us did not expect. They had lost all three matches and are laying at the second position from the bottom of the points table. Welsh Fire is the other team that totally failed to give the best performance in this tournament. They are also searching for a win after playing three matches. They had lost three matches in a row and are laying at the bottom of the points table. The two worst performers are going to face each other in this match and match prediction of this match is confirming that Manchester Originals will open the account on the points table.

Manchester Originals lost their most recent match against Trent Rockets by the margin of eight wickets. The way how their batting order performed in the previous match was just outstanding. They scored a total of 189 runs and they were on the losing side. Almost all batters from their side put some runs on the board. Salt was the most successful and highest run-scorer in the previous match with 70 runs to his name on 46 balls with the help of six boundaries and two huge sixes. The skipper, Jos Buttler was also good with the bat. He scored 71 runs while he faced 25 balls and smashed three boundaries and two huge sixes.

Tristan Stubbs scored 27 runs while Laurie Evans remained not out after scoring 26 runs. Manchester Originals lost the previous match due to the worst performance by their bowling department. They failed to defend the target of 190 runs and leaked this target in 94 balls. The big names of the shorter format of cricket like Fred Klaassen, Sean Abbott, Tom Hartley, Paul Walter, Matthew Parkinson, Andre Russell, and Tristan Stubbs are leading the bowling department of this team and these all bowlers had failed to give the best performance. Matthew Parkinson and Tom Hartley picked one wicket each while no other bowler from their side could manage to pick any wicket.

The most recent match of Welsh Fire against Birmingham Phoenix was very interesting where they lost the match by the margin of just four runs. The way how their batting order performed in that match was just outstanding. They leaked just 130 runs in their 100 balls inning. D Payne, Pretorius, J Ball, Scrimshaw, J Cobb, and Adam Zampa were leading the bowling unit of Welsh Fire, and these all bowlers performed well. Scrimshaw and D Payne picked two wickets each while J Ball, Zampa, and the skipper, J Cobb picked one wicket each.

Welsh Fire lost the previous match due to the worst performance by their batting order. They failed to chase a low target on the board and scored 126 runs while chasing the target of 131 runs. Tom Banton was the most successful batter from their side who scored 44 runs on just 32 balls with the help of two boundaries and the same huge sixes. David Miller was the other batter who was just good with the bat. He remained not out after scoring 35 runs on 30 balls. Sam Hain scored 23 runs while no other batter from their side could even enter into the double figure.

Welsh Fire is full of experienced and young players of the t20 format. The batting order of this team is also strong and some well-known hitters of the t20 format are part of the squad of this team, so the winning chances of today match for Welsh Fire have been increased. The equation of who will win today cricket match prediction and who will win the cricket match today is mentioned as under.

The 16th Match match of The Hundred League 2022 is going to be held at Emirates Old Trafford, Manchester. We had observed in the previous matches played here that the pitch here at this venue is good for batting. The track is slower than the others we have seen and helps the spinners quite a bit. We are hoping that the surface is bound to get slower and be a bit more difficult for batting in this match. A score of 185 is going to be tough to chase.

Who Will Win Manchester Originals vs Welsh Fire, 16th Match The Hundred League-2022

We had provided you the above-mentioned cricket prediction on the basis of our research, understanding, and analysis. You can consider the point we had provided you and the final decision will be yours that you have to make.