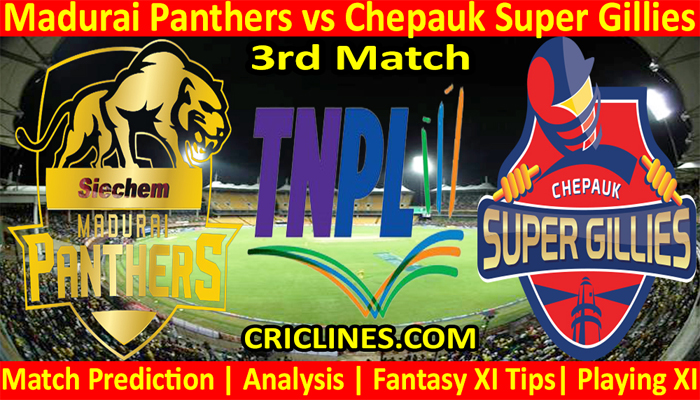 The cricket fans are ready to witness yet another big battle in TNPL T20 League. The 3rd match of Tamil Nadu Premier League 2022 is scheduled to play between Madurai Panthers and Chepauk Super Gillies on Saturday 25th June 2022 at Indian Cement Company Ground, Tirunelveli. We are posting safe, accurate, and secure today match prediction of TNPL free.

The first match of TNPL 2022 between Nellai Royal Kings and Chepauk Super Gillies was very interesting which was decided in the super over even Chepauk Super Gillies lost the match but we saw an outstanding competition by both sides. Madurai Panthers could not perform well in the previous edition of the Tamil Nadu Premier League and could manage to win just two out of seven matches played in the league round. They were situated at the sixth position on the points table. They had made some key changes in the squad for this season of TNPL and we are sure that they will give a tough time to the other teams in this tournament. On the other side, Chepauk Super Gillies had played one match and are aware of the playing conditions. They were good in the first match even though they lost the match.

Madurai Panthers are going to play the first match of TNPL season seven against a team that had already played a match in the conditions of Indian Cement Company Ground, Tirunelveli. NS Chaturvedi had been appointed as a new captain of MPS. He is a good batter and had performed well in the domestic cricket leagues. Balchander Anirudh, M Ayush, and Rithik Easwaran are the key batters of Madurai Panthers for this edition of TNPL. Thalaivan Sargunam is a batting all-rounder in the squad of this time while Arun Karthik is the wicket-keeper batter of this team. We don’t think that the batting order of Madurai Panthers is very strong but they are experienced and will play a key role in the win for the team.

The bowling department is known as the backbone of any team and Madurai Panthers have some best bowlers on the side who had performed well in the different domestic cricket tournaments. Aushik Srinivas, V Gowtham, Kiran Akash, R Mithun, R Silambarasan, Varun Chakaravarthy, V Aaditya, Vignesh Iyer, and Sunny Sandhu are the leading bowlers of MPS. Varun Chakaravarthy is an experienced bowler and had a lot of responsibilities on his shoulders to handle the bowling department. He had also represented the national Indian team and had played six T20Is for team India. He also had played 42 matches in IPL. He played his previous T20 International for India against Scotland at Dubai International Cricket Stadium, Nov 05, 2021, and played his most recent IPL match vs Lucknow Super Giants at Dr. DY Patil Sports Academy, May 18, 2022.

Chepauk Super Gillies had played one match which was very interesting and was decided through the super over against Nellai Royal Kings. The bowling department of CSG is very strong and experienced and is led by Sandeep Warrier, M Siddharth, Sonu Yadav, Harish Kumar, R Alexander, and B Arun but they could not give the best performance in the opening match and were charged for 184 runs in 20 overs. Harish Kumar, Sonu Yadav, Sonu Yadav, and Warrier picked one wicket each while B Arun and R Alexandar could not manage to pick any wicket. We think that CSG is now known for the conditions of the ground and they will perform well as they were in the previous match.

The batting order of CSG was good in the very first match of TNPL 2022 but they could not manage to chase the target of 185 runs and scored 184 runs in 20 overs. Kaushik Gandhi and N Jagadeesan are opening the batting inning for CSG with S Radhakrishnan, Uthirasamy Sasidev, Sonu Yadav, Rajagopal Sathish, and S Harish Kumar are available to handle the middle and lower batting order. The skipper, Kaushik Gandhi played the captain inning and scored 64 runs on just 43 balls with the help of seven boundaries and two huge sixes. Sonu Yadav was the other batter who was good with the bat in the first match. He scored 34 runs and smashed three boundaries during his inning. N Jagadeesan had 25 runs to his name while S Harish Kumar remained not out after scoring 25 runs on just 12 balls with the help of three boundaries and two huge sixes.

The 3rd Match match of Tamil Nadu Premier League season 2022 is scheduled to be held at Indian Cement Company Ground, Tirunelveli. The pitch here at this venue is flat and good for batting as there is no bounce and pace. Out-field at this venue is very fast and the ball will travel to the boundary very quickly. It also has a lot of help for the spin bowlers but almost all teams in this tournament have a strong batting order so this does not matter. According to the live cricket score, a total of 190 runs should be a par score.

While we had a deep look at the squad, we think that Chepauk Super Gillies is going to perform well in this match the TNPL T20 season 7 as they have a couple of players who can change the game. In this match, the batting department of the Chepauk Super Gillies is much stronger as compared to the Madurai Panthers. We also have reports from different sources for the win of the DDS.