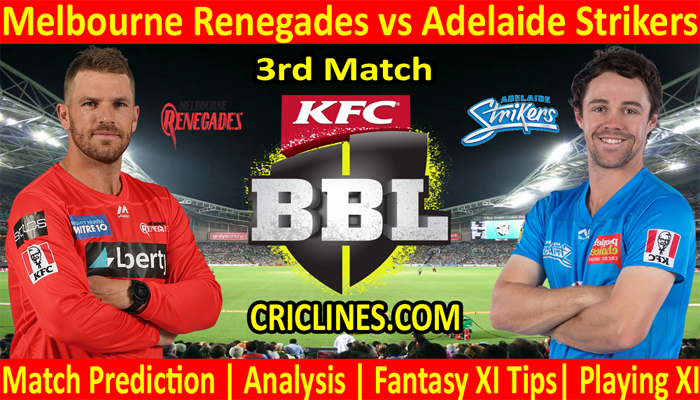 The world is ready to witness yet another big battle of BBL T20. The 3rd match of Big Bash League 2021-22 is scheduled to play between Melbourne Renegades and Adelaide Strikers on Tuesday, 7th December 2021 at Docklands Stadium, Melbourne. We are posting safe, accurate, and secure today match prediction of BBL T20 free.

Melbourne Renegades was the worst-performing team of the previous season of the Big Bash League. They could manage to win just four out of 14 matches. They lost ten matches and were laying at the bottom of the points table after the league stage matches were ended. On the other side, Adelaide Strikers had an average performance in the 10th edition of BBL T20. They also played 14 matches with seven wins and the same losses.

Aaron Finch had led Melbourne Renegades in almost four seasons but now Nic Maddinson is the new captain of this team. The batting order of Renegades is strong and experienced and they have the best batsmen of the shorter format of cricket. Aaron Finch, Marcus Harris, Mackenzie Harvey, Unmukt Chand, Jake Fraser, and Will Sutherland are going to lead the batting order of Melbourne Renegades while Sam Harper is the wicket-keeper batsman of this team.

Melbourne Renegades are very rich in the bowling department. Mohammad Nabi is part of the bowling squad of this team who has been good in the World Cup. Cameron Boyce, Zak Evans, Josh Lalor, James Pattinson, Mitchell Perry, Jack Prestwidge, Kane Richardson, Reece Topley, and Zahir Khan are the leading bowlers of Melbourne Renegades.

Adelaide Strikers had not made many changes in their squad for this 11th edition of the Big Bash League. They are a good team but we can not say that this team will qualify for the semi-finals as the batting order of this team is very poor. Travis Head is the new skipper, of the Strikers for this tournament. Ryan Gibson, Matt Renshaw, Jake Weatherald, and Jonathan Wells are the leading batsmen. Matthew Short and Liam Scott are batting all-rounders while Alex Carey and Harry Nielsen are wicket-keeper batsmen of the Strikers.

The bowling department of Adelaide Strikers is strong and experienced for this season of BBL T20. Wes Agar, Fawad Ahmad, Harry Conway, George Garton, Spencer Johnson, Liam O Connor, Peter Siddle, Daniel Worrall, and Rashid Khan are the key bowlers of this team. Rashid Khan is part of this team for the last few seasons and he had played a key role for his team. The conditions in Melbourne will help him to get early wickets.

Head to Head Record Between Melbourne Renegades and Adelaide Strikers

Rashid Khan, Aaron Finch, and Mohammad Nabi are key players to watch in this match.

The 3rd Match match of Big Bash League 2021-22 is going to be held at Docklands Stadium, Melbourne. We had observed in the previous matches played here that the pitch here at this venue is good for batting. The track is slower than the others we have seen and helps the spinners quite a bit. We are hoping that the surface is bound to get slower and be a bit more difficult for batting in this match. A score of 185 is going to be tough to chase. 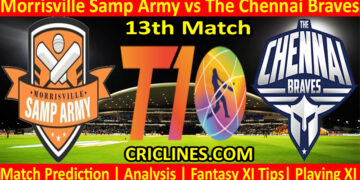