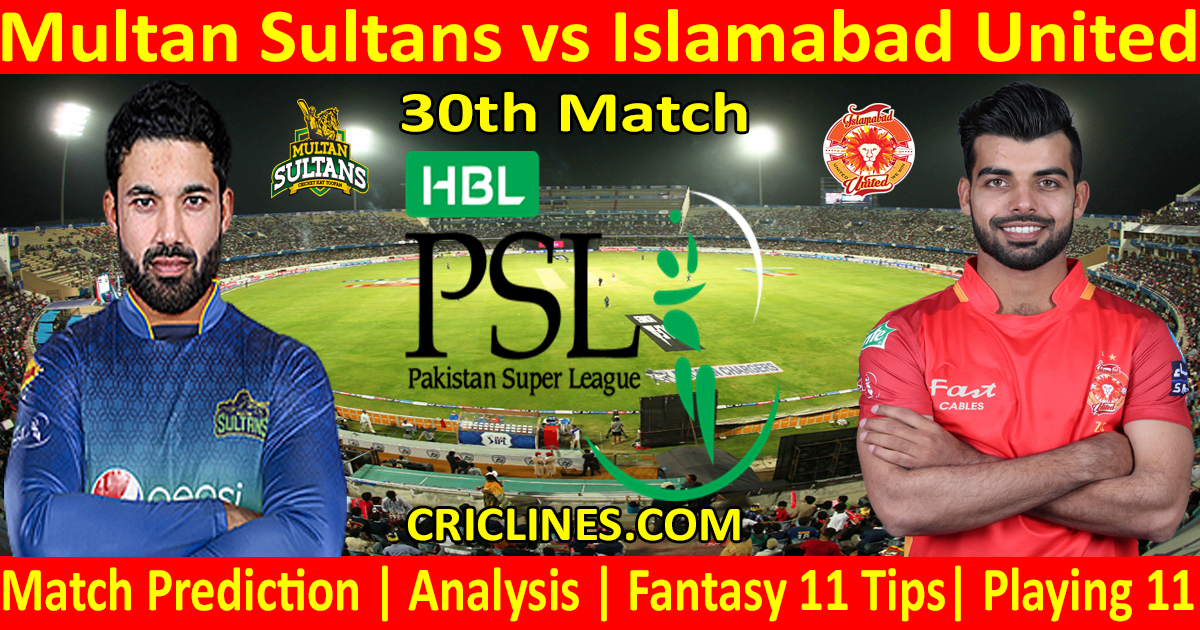 The world is ready to witness yet another big battle of PSL T20. The 30th Match of Pakistan Super League 2021 is scheduled to play between Multan Sultans and Islamabad United on Saturday, 19th June 2021 at Sheikh Zayed Stadium, Abu Dhabi. We are posting safe, accurate, and secure today match prediction for all matches of PSL free.

The performance of Multan Sultans had been average in is a tournament and they are currently holding the 4th position on the points table with two matches left at the league stage which are must-win for this team reach to the next level of Pakistan Super League. They had played eight matches with four wins and the same losses. They are coming to this match on the back of a massive win over Quetta Gladiators with a handsome margin of 110 runs. They lost the toss and were asked to bat first. The performance of their batting order was good as they scored 183 runs in their inning of 20 overs. Shan Masood was the highest run-scorer from their side who scored 73 runs on 42 deliveries with the help of four sixes and seven boundaries.

Johnson Charles also performed well in the previous match. He scored 47 runs on 24 balls and smashed five boundaries and two sixes. Mohammad Rizwan scored 21 runs while Khushdil Shah remained not out after scoring 20 runs. Like the batting, the bowling unit of Multan Sultans also performed well in the previous match. They defended the target of 184 runs and send the all team of Quetta Gladiators back to the pavilion on a total of just 73 runs in 12.1 overs. Imran Tahir was the most successful and highest run-scorer from their side with three wickets to his name. He bowled out just two overs and leaked 7 runs. Imran Khan picked two wickets while Shahnawaz Dhani, Sohail Tanvir, and Blessing Muzarabani picked one wicket each in the previous match.

Islamabad United had qualified for the playoff of PSL season six. They are the best performing team of this tournament and are going to play their last league stage match. They had played nine matches with seven wins to their name. They had lost just two matches and are leading the points table. They had beaten Peshawar Zalmi in their previous match by the margin of 15 runs. They lost the toss and were asked to bat first. The way how their batting order performed in that match was just outstanding. They scored a total of 247 runs in their inning of 20 overs which is the highest total of PSL history so far. Usman Khawaja was the highest run-scorer from their side who scored his first PSL century. He scored 105 runs and remained not out till the end of the inning. He faced 56 deliveries and smashed 13 boundaries and three huge sixes.

Colin Munro also had an outstanding performance with the bat. He scored 48 runs on 28 balls with the help of two sixes and five boundaries. Asif Ali smashed the inning of 43 runs on just 174 deliveries. He smashed two boundaries and five huge sixes while Brandon King remained not out after scoring 46 runs. the bowling department of Islamabad United failed to give the best performance in the previous match but they defended the target of 248 runs and leaked 232 runs in their inning of 20 overs. Akif Javed was the highest wicket-taker from their side with three wickets to his name. He bowled out four overs and leaked 43 runs. Hussain Talat picked two wickets while Hasan Ali had one wicket to his name.

The 30th Match of Pakistan Super League season 2021 is scheduled to be held at Sheikh Zayed Stadium, Abu Dhabi. The pitch here at this venue is flat good for batting as there is no bounce and pace. Out field on this venue is very fast and the ball will travel to the boundary very quickly. It also has a lot of help for the spin bowlers but almost all teams in this tournament have a strong batting order so this does not matter. According to the live cricket score, a total of 180 runs should be as a par score.