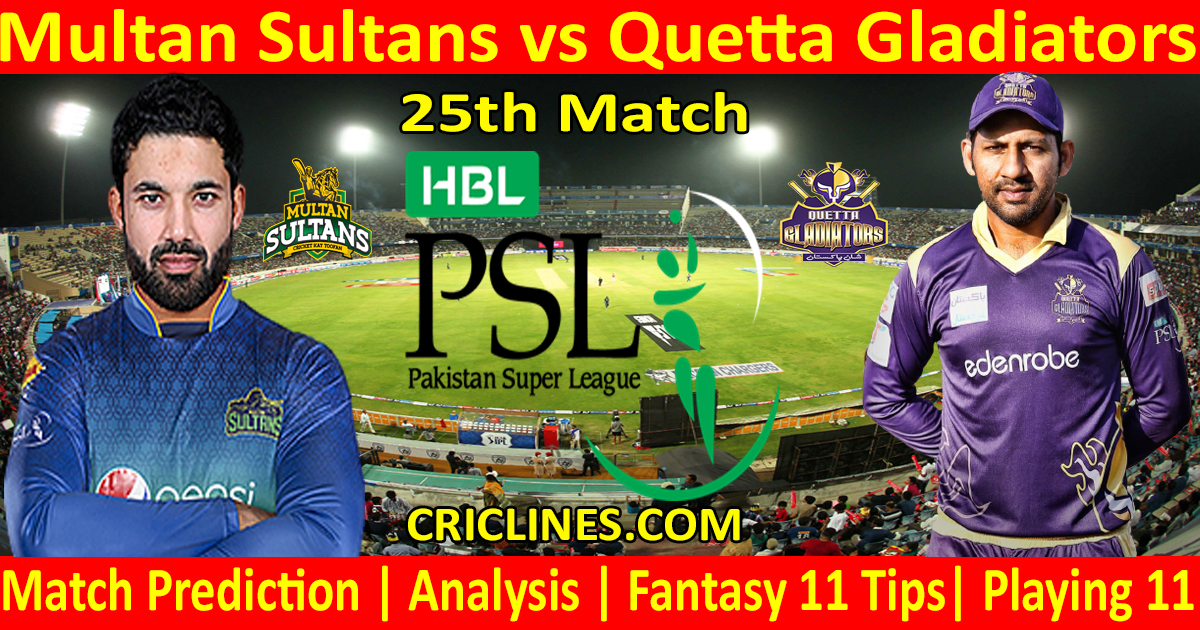 The cricket fans are ready to witness yet another big battle of PSL T20. The 25th Match of Pakistan Super League 2021 is scheduled to play between Multan Sultans and Quetta Gladiators on Wednesday, 16th June 2021 at Sheikh Zayed Stadium, Abu Dhabi. We are posting safe, accurate, and secure today match prediction for all matches of PSL free.

Multan Sultans is holding the 4th position on the points table after winning three out of seven matches played. They had lost four matches and had left two matches which are very important for them. They are coming to this match on the back of a massive win over Peshawar Zalmi in their most recent match by the margin of eight wickets. They won the toss and decided to field first. The performance of their bowling unit was not good in that match. They leaked 166 runs in their inning of 20 overs. Shahnawaz Dhani was the most successful and highest wicket-taker from their side who picked four wickets in his four overs bowled out against 31 runs.

Muzarabani picked one wicket while Imran Khan, Sohail Tanveer, and Imran Tahir were the bowlers who failed to pick any wicket. The way how the batting order of Multan Sultans performed in the previous match was just outstanding. They chased the target of 167 runs in 16.3 overs. The skipper, Mohammad Rizwan was the most successful and highest run-scorer from their side who remained not out after scoring 82 runs. He faced 56 deliveries and smashed nine boundaries and two huge sixes. Sohaib Maqsood also had an outstanding performance with the bat. He scored 61 runs on 31 deliveries with the help of four boundaries and five sixes.

Quetta Gladiators had played eight matches with just two wins to their name. They had lost six matches and are laying at the bottom of the points table. They had beaten Lahore Qalandars in their most recent match by the margin of 18 runs. They lost the toss and were asked to bat first. The performance of their batting order was just good in the previous match. They scored 158 runs in their inning of 20 overs. Weatherald was the highest run-scorer from their side with 48 runs to his name. Azam Khan scored 33 runs while the skipper, Sarfaraz Ahmad scored 34 runs.

Quetta Gladiators won the previous match due to the best performance by their bowling department. They defended the target of 159 runs and send the all team of Quetta Gladiators back to the pavilion on a total of 140 runs in 18 overs. Khurram Shahzad was the most successful bowler from their side who picked three wickets in his three overs bowled out against 14 runs. Usman Shinwari also picked three wickets in his four overs bowled out while he was charged for 32 runs. Mohammad Hasnain and Mohammad Nawaz picked two wickets each.

The toss had played a key role in the decision of all previously played matches of Pakistan Super League season six. We had seen in the previous editions of this tournament that chase is the best option for both teams at the venue of Abu Dhabi. Almost 85% of matches had been won by the bowling first. According to our toss prediction, the team that will win the toss may choose to field first.

The 25th Match of Pakistan Super League season 2021 is scheduled to be held at Sheikh Zayed Stadium, Abu Dhabi. The pitch here at this venue is flat good for batting as there is no bounce and pace. Out field on this venue is very fast and the ball will travel to the boundary very quickly. It also has a lot of help for the spin bowlers but almost all teams in this tournament have a strong batting order so this does not matter. According to the live cricket score, a total of 180 runs should be as a par score.

While we had a deep look at the squad, we think that Quetta Gladiators is going to perform well in this match the PSL T20 season 6 as they have a couple of players who can change the game. In this match, the batting department of the Quetta Gladiators is much stronger as compared to the United. We also have reports from different sources for the win of the Sultans.