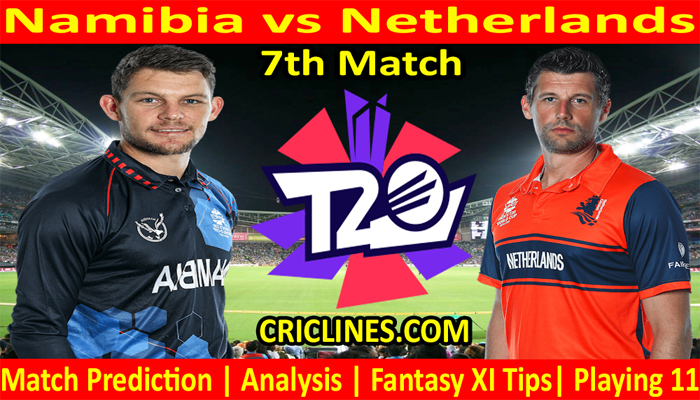 The world is ready to witness yet another big battle of World Cup T20. The 7th Match of World Cup T20 2021 is scheduled to play between Namibia and Netherlands on Wednesday, 20th October 2021 at Sheikh Zayed Stadium, Abu Dhabi. We are posting safe, accurate, and secure today match prediction of World Cup free.

Both teams, Namibia and Netherlands had lost their opening matches and this match had become a final for these two teams. The team who will win this match will have a chance to move forward to the super 12 stages of this tournament.

Namibia was beaten by Sri Lanka in their first match by the margin of seven wickets where they lost the toss and were asked to bat first. The batting order of this team totally failed to give the best performance. They could manage to score just 96 runs and were all-out in 19.3 overs. Craig Williams was the most successful and highest run-scorer from their side who scored 29 runs. The skipper, Gerhard Erasmus had 20 runs to his name.

The performance of the bowling department of Namibia was also poor in the previous match. They failed to defend the target of 97 runs even they used eight bowlers. They leaked the target in 13.3 overs. Ruben Trumpelmann, Bernard Scholtz, and JJ Smuts picked one wicket each while David Wiese, Pikky Ya France, Jan Nicol Loftie-Eaton, Jan Frylinck, and Gerhard Erasmus were the bowlers who failed to pick any wicket.

The Netherlands had lost their opening match of this tournament against Ireland by the margin of seven wickets. They decided to bat first after winning the toss. They could manage to score 106 runs in their 20 overs inning. Max ODowd was the highest run-scorer from their side who scored 51 runs with the help of seven boundaries. The skipper, Pieter Seelaar could manage to score 21 runs while Colin Ackermann and Logan van Beek scored 11 runs each.

The bowling department of the Netherlands also failed to give the best performance in the previous match. They failed to defend the target of 107 runs and leaked this target in 15.1 overs. Fred Klaassen, Brandon Glover, and the skipper, Pieter Seelaar picked one wicket while Roelof van der Merwe and Logan van Beek were the bowlers who failed to pick any wicket in the previous match.

Only one T20 match had been played between Namibia and Netherlands which was won by the Netherlands. This match was played back in 2019.

Craig Williams, Max ODowd, and Fred Klaassen are key players to watch in this match.

The Netherlands is full of experienced and young players of the t20 format. The batting order of this team is also strong and some well-known hitters of the t20 format are part of the squad of this team, so the winning chances of today’s match for the Netherlands have been increased. The equation of who will win today’s cricket match prediction and who will win the cricket match today is mentioned as under.

The 7th Match match of World Cup T20 2020-21 is going to be held at Sheikh Zayed Stadium, Abu Dhabi. We had observed in the previous matches played here that the pitch here at this venue is good for batting. The track is slower than the others we have seen and helps the spinners quite a bit. We are hoping that the surface is bound to get slower and be a bit more difficult for batting in this match. A score of 180 is going to be tough to chase.

Who Will Win Namibia vs the Netherlands, 7th Match WTC 21

Dream11 Prediction for Namibia vs Netherlands, 7th Match. After checking the latest player’s availability, the Dream 11 Team for this match of Namibia vs the Netherlands, is mentioned under.