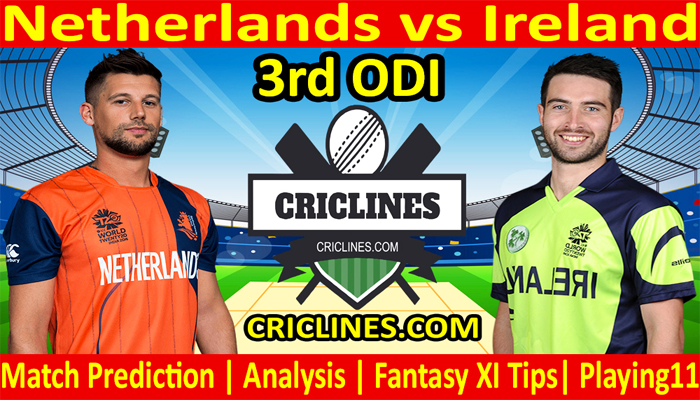 Netherlands won the first ODI match by the margin of one run but they were beaten by Ireland in the 2nd ODI by a handsome margin of eight wickets where they won the toss and decided to bat first. The batting order of the Netherland failed to put a big total on the board and they could manage to score just 157 runs and were all-out in 49.2 overs. Max ODowd was the highest run-scorer from their side who scored 36 runs with the help of five boundaries. Bas de Leede and Scott Edwards scored 23 runs each while van Beek remained not out after scoring 22 runs.

The bowling department of the Netherlands also failed to give their best performance in the second ODI match. They failed to defend the target of 158 runs and leaked this target in 43 overs. The skipper, Pieter Seelaar was the most successful bowler from their side who picked one wicket in his nine overs bowled out against 38 runs. Logan van Beek also picked one wicket while he was charged for 34 runs in his seven overs bowled out. Fred Klaassen, Brandon Glover, Timm van der Gugten, and Max ODowd were the bowlers who failed to pick any wicket in the second ODI.

Ireland had a strong comeback in the second ODI match after losing the first match. They won the second ODI match with a handsome margin of eight wickets. They lost the toss and were asked to field first. The performance of their bowling unit was good in that match. They leaked 157 runs and send the all team of the Netherland back to the pavilion in 49.2 overs. Craig Young was the most successful bowler from their side who picked four wickets in his 9.2 overs bowled out while he was charged for just 18 runs.

Joshua Little was the other bowler who had an outstanding performance with the ball. He picked four wickets in his 10 overs bowled out against 39 runs. Barry McCarthy and Andy McBrine picked one wicket each. The way how the batting order of Ireland performed in the second ODI match was just outstanding. They chased the target of 158 runs in 43 overs with eight wickets in hand. Andrew Balbirnie was the most successful and highest run-scorer from their side who scored 63 runs and remained not out till the chase of the target. He faced 127 deliveries and smashed six boundaries during his inning. Paul Stirling also had an outstanding performance with the bat. He scored 52 runs while Harry Tector remained not out after scoring 30 runs.

Netherlands had played a total of 84 ODI matches where they won just 33 while opposing teams who 47 matches. Their one match was tied and three matches were ended with no result.

Ireland had played 166 ODI matches so far. They had won 70 matches and had lost 85 matches. Their 8 matches were ended with no result and three matches were tied.

The 5th match of the Netherlands vs Ireland will be played at Sportpark Maarschalkerweerd, Utrecht. The pitch at this stadium is good for batting but is one of the slower pitches in the Caribbean. Run-scoring is not going to be very easy and that could actually be a good thing for the Windies.

The weather forecast for Utrecht match day is not very good. Rain is predicted for most of the day and so it looks like we are going to struggle to get a game in.

Who Will Win Netherlands vs Ireland-3rd ODI

Dream11 Prediction for Netherlands vs Ireland-Netherlands-3rd ODI. After checking the latest players’ availability, which players will be part of both teams, he possible tactics that the two teams might use as we had leaned from previous matches of the Netherland vs Ireland to make the best possible Dream11 team.