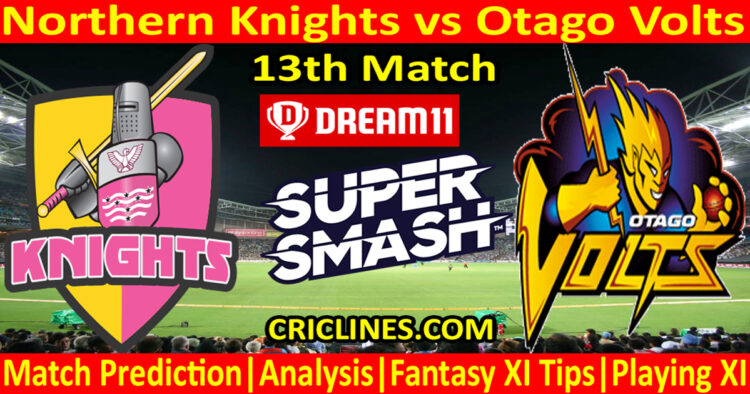 The world is ready to witness yet another big battle of T20 cricket. The 13th match of Super Smash League 2022-23 is scheduled to play between Otago Volts and Northern Knights on Friday, 6th January 2023 at Seddon Park, Hamilton. We are posting a safe, accurate, and secure today match prediction of Super Smash League.

Northern Knights are currently the second-best performing team of this edition of Super Smash League right now. They had played a total of four matches with two wins to their name. They had lost two matches and are holding the second position on the ladder. The performance of Otago Volts had not been much impressive in this tournament. They won just one out of four matches played. They had lost two matches while their one match was tied. They are currently situated at the fourth position on the table.

Northern Knights had beaten the best performing team of this tournament, Wellington Firebirds in their most recent match with a handsome margin of six wickets. They won the toss and decided to field first. The way how their bowling unit performed in the previous match was just outstanding. They leaked just 136 runs against the strong batting order of Wellington in 20 overs. Almost all bowlers from their side picked wickets. Tim Pringle was the most successful and highest wicket-taker from their side with three wickets to his name in four overs while he was charged for 23 runs.

Zak Gibson, Kristian Clarke, Joe Walker, Frederick Walker, and Brett Hampton picked one wicket each. The batting order of the Knights also performed well in the previous match and chased the target of 138 runs in 18.4 overs. Henry Cooper was the most successful and highest run-scorer from their side with 52 runs to his name. He faced 45 balls and smashed five boundaries and two huge sixes. He remained not out till the chase of the target. Katene Clarke also performed well with the bat and scored 49 runs on 38 balls with the help of five boundaries and two huge sixes. Peter Bocock was the other batter who put some runs on the board. He scored 15 runs while the skipper, Jeet Raval had 10 runs to his name.

The previous match of Otago Volts was tied against Auckland Aces. There is no super overrule in Super Smash so the points of this match were divided between these two teams. Otago Volts lost the toss and were asked to bat first. The performance of their batting order was good and they scored 174 runs in 20 overs. Dean Foxcroft was the most successful and highest run-scorer from their side scoring 69 runs on 56 balls with the help of four boundaries and three huge sixes. Llew Johnson also had an outstanding performance with the bat. He scored 46 runs on just 27 balls and smashed five huge sixes during his inning.

Josh Finnie scored 17 runs while the skipper, Hamish Rutherford could manage to score just 10 runs. No other batsmen from their side could manage to enter into the double figures. The bowling unit of Otago Volts failed to give the best performance but they defended the target of 175 runs and leaked 174 runs. Jacob Duffy was the most successful bowler from their side. He picked up two wickets in four overs against 27 runs. Matthew Bacon also picked two wickets but he leaked a lot of runs. He was charged for 46 runs in four overs. Michael Rae, Ben Lockrose, and Dean Foxcroft picked one wicket each while Jake Gibson was the only bowler from their side who could not manage to pick any wicket.

The toss can play an important role in the decision of this match as we had observed in the previous matches of this season of Super Smash League. As per toss prediction, the team who will win the toss may choose to field first.

The 13th match of Super Smash League is going to be held at Seddon Park, Hamilton. The pitch here at this venue should be good for batting as it is in most places around New Zealand. We should have a very high scoring match if we get some warm and sunny conditions. A score of more than 190 runs should be as par.

The weather forecast for Hamilton for today match is not good. There are some chances of rain but we are hoping that there will be no disturbance during this match.

We had provided you with the above-mentioned Super Smash League Prediction on the basis of our research, understanding, and analysis. These prediction tips have also based on the reports which we have from our different sources. You can consider the point we had provided you and in the end, the 13th decision will be yours.