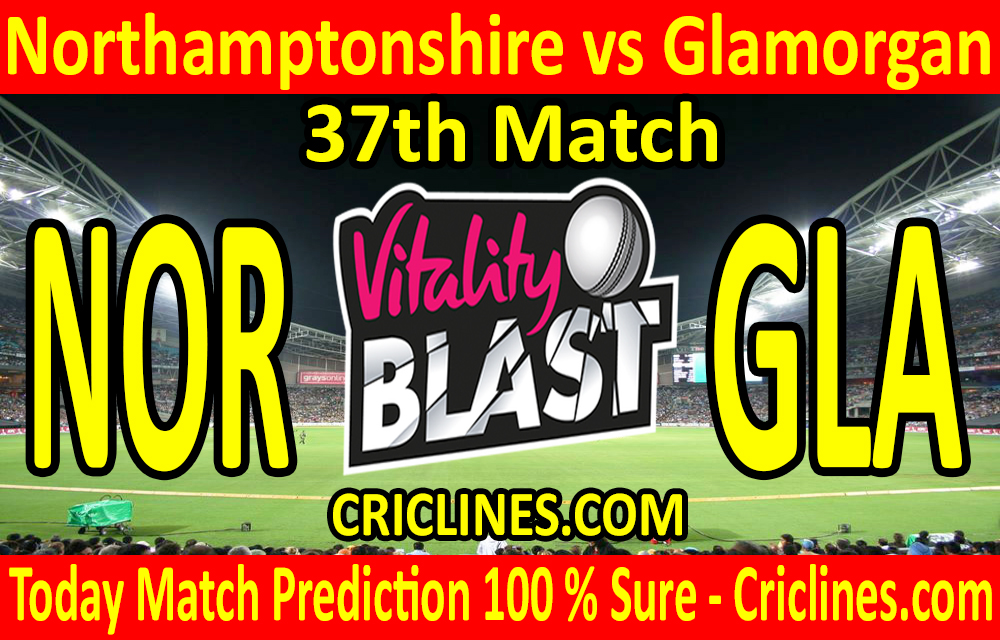 The cricket fans are ready to witness yet another big battle of Vitality T20 Blast. The 37th Match of Vitality T20 Blast 2020 is scheduled to play between Northamptonshire and Glamorgan on Thursday, 3rd September 2020 at Edgbaston, Birmingham. We are posting safe, accurate, and secure today match prediction for all matches of T20 Blast free.

Northamptonshire had started their campaign in this season of T20 Blast in an excellent way. They had played four matches so far with three wins to their name. Their one match was ended with no result and they are leading the points table of the Central Group. They won their previous match against Warwickshire with a handsome margin of 38 runs. They lost the toss and were asked to bat first. The performance of their batting order was average. They could manage to score 158 runs in their inning of 20 overs. R Levi was the highest run-scorer from their side who scored 35 runs. Ricardo Vasconcelos scored 34 runs while Saif Zaib had 30 runs to his name. They performance of the bowling unit of Northamptonshire was very impressive. They defended the target of 159 runs and leaked 120 runs in their inning of 20 overs. Ben Sanderson was the highest wicket-taker from their side who picked three wickets in his 2.5 overs bowled out against just 11 runs. Brandon Glover, Nathan Buck, and Graeme White picked two wickets each.

Glamorgan had failed to give their best performance in this tournament. They had played a total of four matches with just one win to their name. They had lost two matches and are situated in the 4th position on the points table of Central Group. They were beaten by Somerset in their most recent match by the margin of eight wickets where they lost the toss and were asked to bat first. The performance of their batting order was not much impressive. They could manage to score 133 runs in their 20 overs inning. The skipper, C Cooke was the highest run-scorer from their side who scored 42 runs. de Lange remained not out after scoring 28 runs while Andy Balbirnie scored 17 runs. The bowling unit of Glamorgan failed to defend a low target on the board and was charged for the target in just 16.1 overs. Andrew Salter and Timm van der Gugten picked one wicket each while Prem Sisodiya, Marchant de Lange, Daniel Douthwaite, and Graham Wagg were the bowlers who failed to pick any wicket.

The 37th Match of Vitality T20 Blast is going to be played at Edgbaston, Birmingham. The pitch here at this stadium is expected to be flat and much favored for batting. It has a decent amount of pace and bounces in it. We may have some high scoring matches here. The pitch may also have some help in it for the seamers.

Check out the Dream11 fantasy prediction for the 37th Match of the finals day in Vitality T20 Blast, between Northamptonshire and Glamorgan.

NOT vs GLA DREAM11 LINEUP